Korčula - 'One of Dalmatia’s Precious Gems'

Whether the Venetian merchant and explorer Marco Polo was really born on the island of Korčula, we may never know. But even without his trace on the island, we can certainly confirm one thing - Korčula is one of Dalmatia’s precious gems.

Korčula is an island with over 20,000 years of history, heavenly white wine, vibrant sword dances, and unequaled beaches. It is an island where tourists can experience the Mediterranean as it once was, without the footsteps of tourists that trample Hvar and Dubrovnik. It is lit up by local life, quaint villages, and fertile fields. It is a fantasy destination for foodies and history buffs. But more than all, it is a sanctuary for sailors. 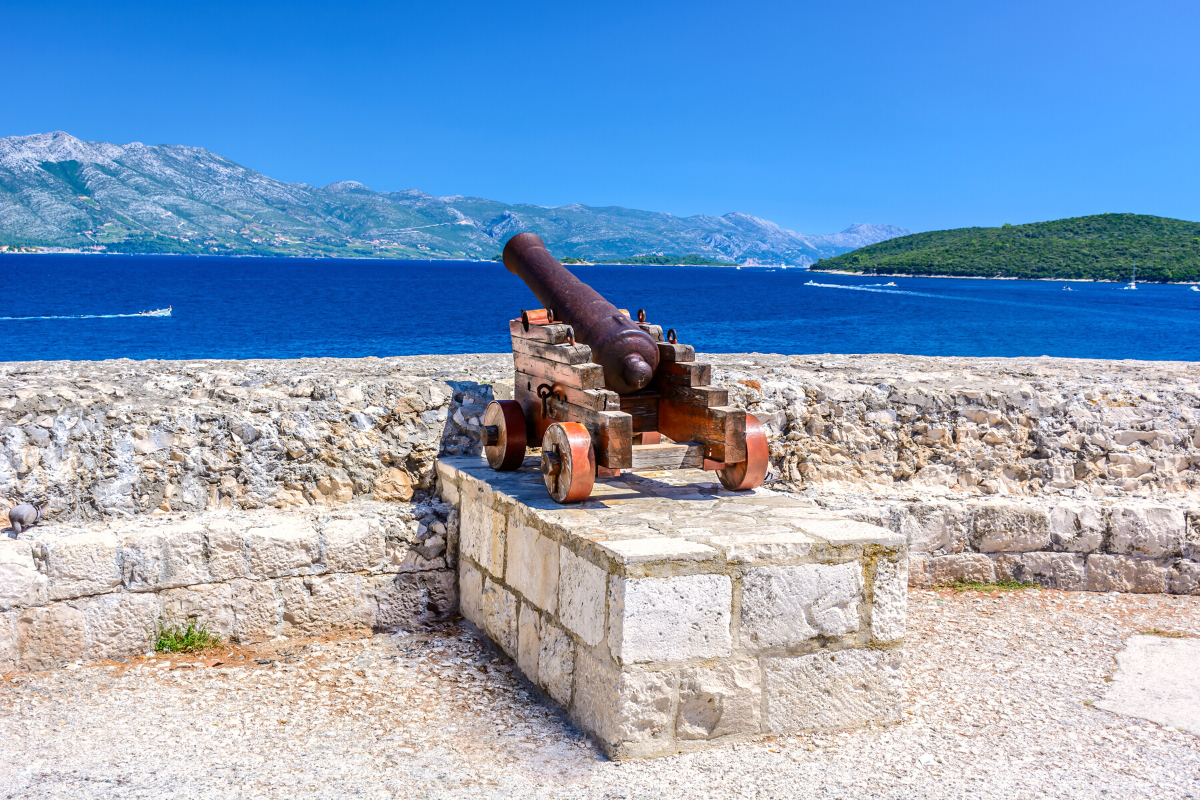 Korčula is located in the central Dalmatian archipelago, southwest of the Pelješac peninsula, south of Hvar, east of Vis, and north of Lastovo.

Archeological findings reveal that the island was populated in Neolithic times, which is confirmed by Vela Spila, a 30,000-year-old cave near Vela Luka, Jakasova Cave above Rasohatica Bay, and Neolithic cemetery remains in the town of Žrnovo. Illyrian remains also date back to the Bronze and Iron Ages. The island was inhabited by Greeks in the 5th and 6th centuries BC before it became part of the Roman Empire. The Ostrogoths claimed the island once the Roman Empire fell, until the Byzantines arrived in AD 555. The South Slavic Neretvans followed in the 9th century and the Venetians in AD 1000.

An extended period of Venetian rule lasted until around 1420, with stints by Croatian, Croatian-Hungarian, Zahumljan, and Bosnian rulers. Finally, the Venetian Republic fell to Napoleon in 1797, followed by Austrian and French rule, Russian attacks, and the reign of the British Navy. Korčula was under Austrian rule as part of the Kingdom of Dalmatia from 1815 until the State of Slovenes, Croats, and Serbs was established in 1918. The island was then occupied by Italy and annexed to the state of Yugoslavia thanks to the Treaty of Rapallo in 1921. Consequences from the war saw some towns on the island lose half of their population from 1921-1941 and even further emigration from 1945 to 1965.

Tourism, however, began to slowly develop on Korčula during Yugoslavia, with hotels erected as emigration halted. The island was not occupied after Croatia gained independence and fought in the Homeland War in the early 1990s, though it housed refugees in its hotels for several years. As tourism on the Adriatic boomed, so did Korčula’s popularity. However, it never fell victim to overtourism, as many of its Adriatic counterparts. 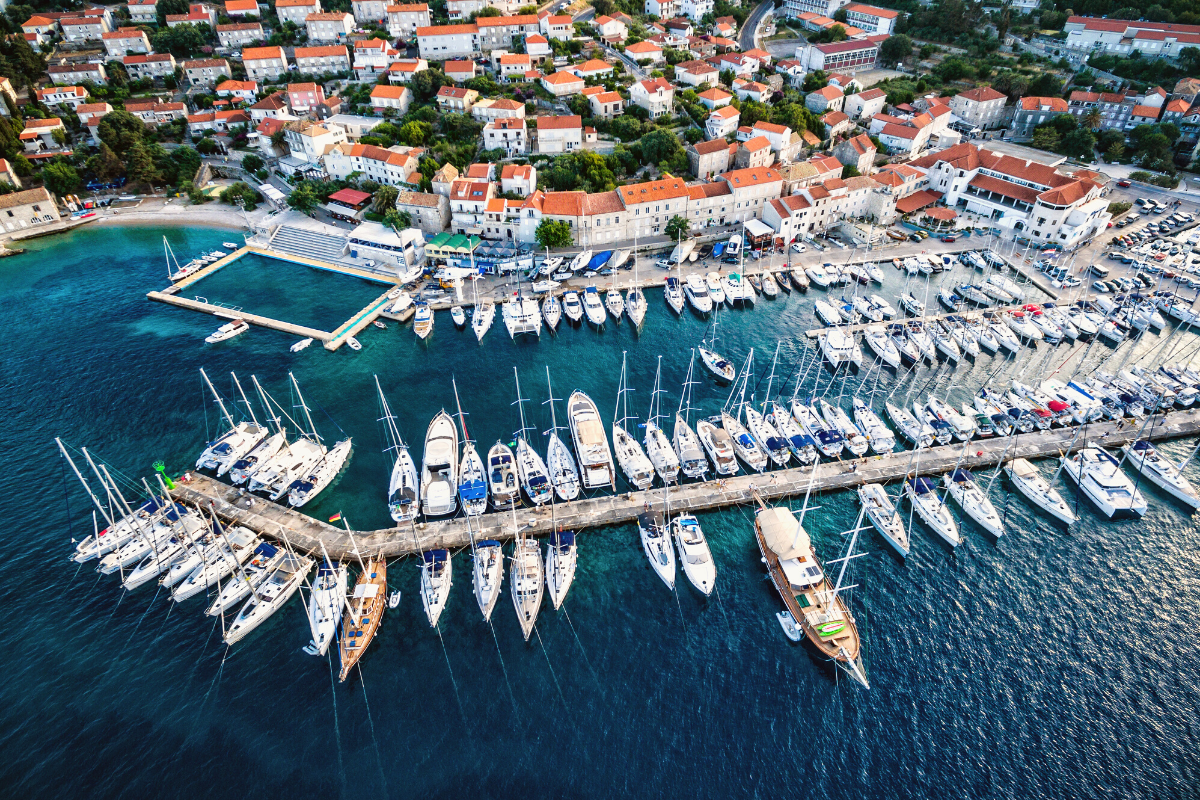 ACI Marina Korčula: Open throughout the year, ACI Marina Korčula is located on the eastern end of Korčula, next to the famous Korčula town, with 159 berths for yachts of up to 50 meters. It was awarded the “Tourist Flower – Quality for Croatia '' for the best island marina back in 2013 and has won the Blue Flag award for several years. Boaters can find everything they need here, from laundry to shower facilities, restaurants, supermarkets, and hair salons, all while getting to explore the ancient walled city.

Marina Lumbarda: Located about two miles from Korčula town on the easternmost cape of the island is Marina Lumbarda, in the town of the same name. With a capacity of 115 berths for boats up to 25 meters in length, this marina has its perks in that it too is located next to a proper town, with restaurants, cafes, and shopping within walking distance from your yacht. And given that you’re still pretty close to Korčula town, the options are even more exciting.

Marina Korkyra in Vela Luka: Marina Korkyra is the most modern marina and the only marina in the western part of the island, located in the town of Vela Luka. Boasting 135 berths suitable for mooring boats from 7 to 40 meters, the marina offers a beautiful view of the famous Ošjak island and Vela Luka. And considering its proximity to the town, boaters have access to restaurants, shops, and more.

Anchorages: But that’s only mentioning the marinas. You’ll quickly learn that Korčula abounds in outstanding locations to drop anchor, from Luka Banja to Badija, Račišće, and Pržina, to name a few. 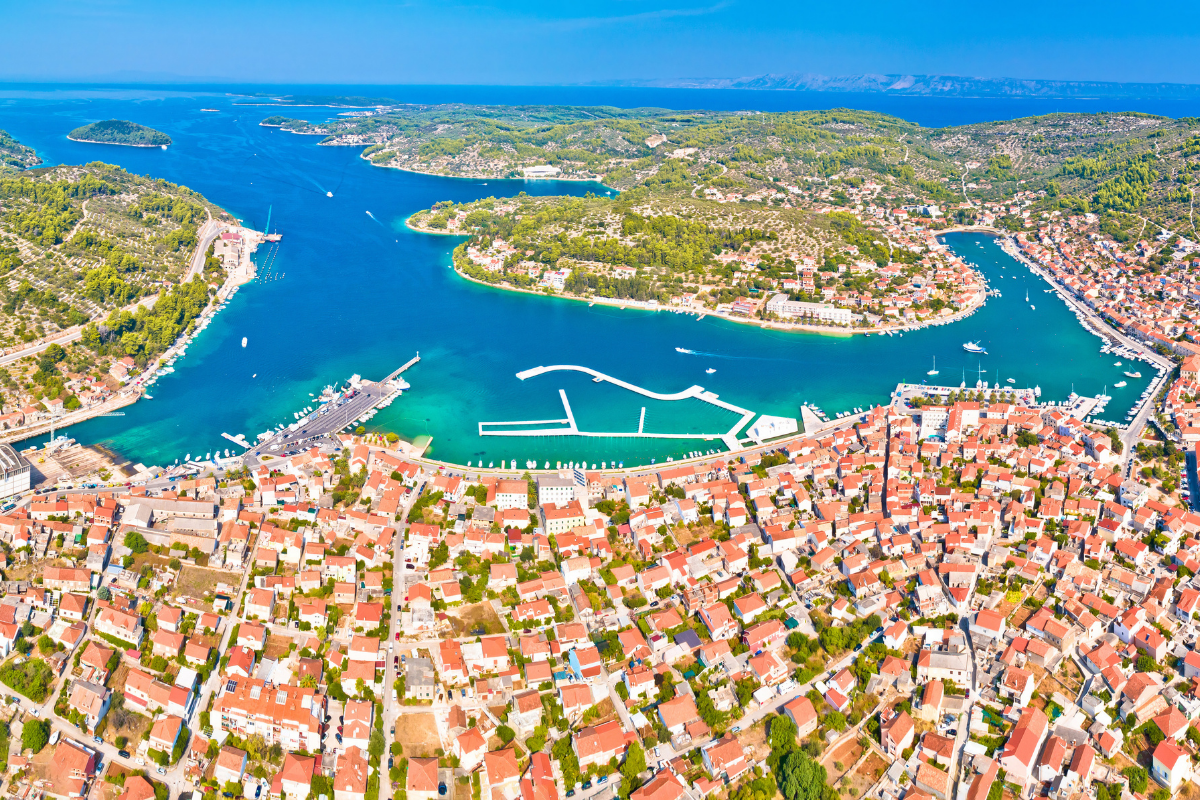 Korčula town: The most popular tourist town is named after the island and often draws comparisons to Dubrovnik, without the size and the crowds. This compact community is too surrounded by the remains of defensive walls, built in the 13th and 14th centuries, which add to its grandeur. Easily walkable and decorated with Dalmatian restaurants, cafes, art galleries, and jewelry shops, Korčula town is also supposedly where Marco Polo was born, and you can even explore his house!

Vela Luka: Vela Luka is the largest town on the island and located on the opposite end of Korčula town, some 42 kilometers away. Tucked into an indented and sheltered bay, Vela Luka was only first developed as a town in the 19th century, though its history dates back long before. It is here that you can visit Vela Spila, one of the most important prehistoric localities in Europe!

Lumbarda: The land of sandy beaches, the ancient white Grk grape (which has grown here for 2,300 years), and shipbuilders is situated just 6 kilometers east of Korčula town, in a bay that overlooks the Pelješac peninsula. Lumbarda is also lucky as it is the closest settlement to Mljet and Lastovo islands. While it has turned to tourism and its trends, Lumbarda’s position on the island allows you to feel secluded serenity while still being well connected to the bustle if needed.

Or head inland: Because Korčula island isn’t all about the coast. Head inland to discover Korčula wine country! Smokvica is the birthplace of Pošip wine, while Čara too breeds the indigenous white wine grape. The hilly town of Blato is the cradle of sword dancing, folk dancing, and a cappella singing! And that’s just part of it.

Where to eat & drink? 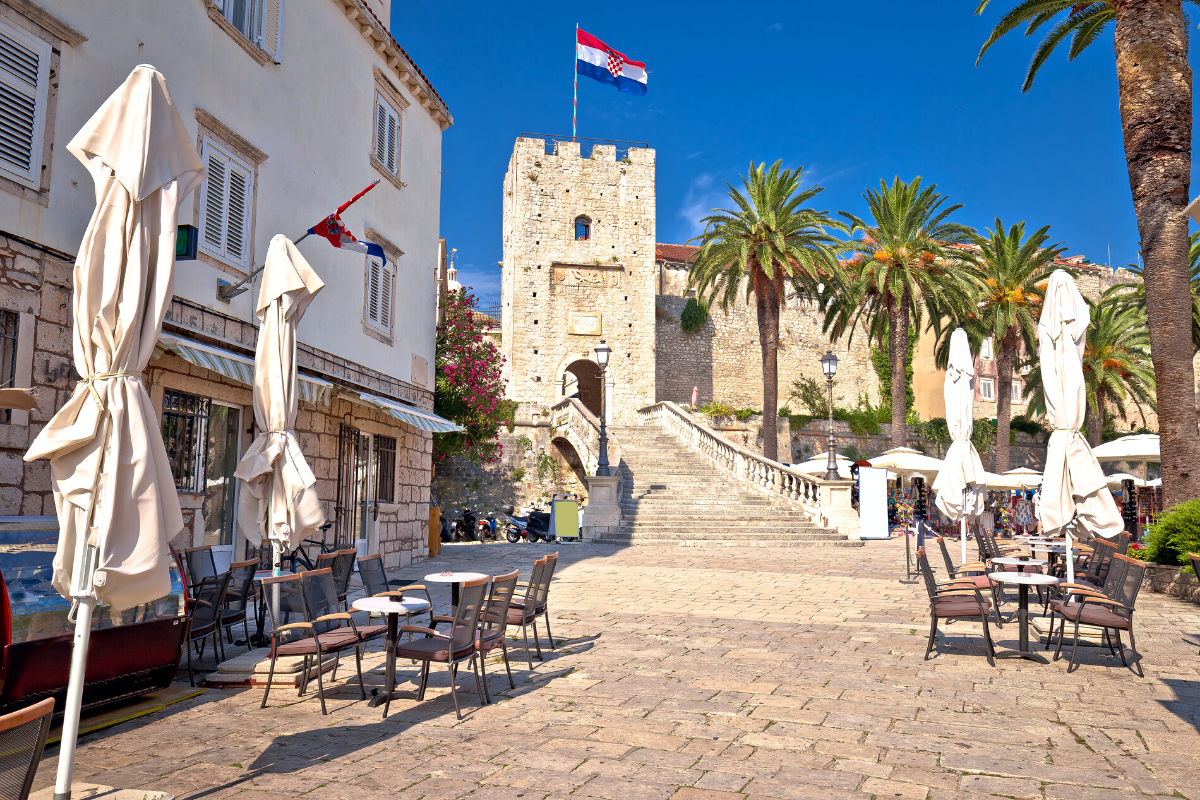 Did you know that Korčula is famous for Žrnovski makaruni, a tubular pasta hailing from the town of Žrnovo and made for over 400 years? This little island certainly packs a punch in its culinary offer, and these are some restaurants you won’t want to miss.

Konoba Mate: Located in the village of Pupnat, not far from the Pupnat harbor (and one of the island’s best beaches), is Konoba Mate, a Michelin-recommended family-run tavern with homemade pasta and goat cheese at its core, inspired by recipes nurtured on the island.

Lesic Dimitri: For those of you looking for a first-class fine dining experience, you can have that, too. LD Restaurant, part of the Lesic Dimitri Palace hotel in Korčula town, boasts the only Michelin star on the island! Honoring seasonal ingredients and a menu ‘rooted in the rich Dalmatian cuisine,’ the flavors of this restaurant can even be brought to your yacht!

Adio Mare: Korčula town's oldest family-run restaurant opened back in 1974, and when you visit, you’ll notice not much has changed. Classic tavern-style fare and local specialties are the pride of this menu, and it’s also good for groups.

Filippi: If you’re looking to dine with sea views, Filippi is your Korčula town go-to. From Ston oysters to traditional Korčula pasta, meat dishes, and more, Filippi’s wine list also highlights smaller local producers you may not be able to find elsewhere!

Konoba Maha: For an authentic edible experience in the middle of nature, there is no better place than Maha. This rustic, family-run restaurant is located about 10-minutes away from Korčula town by car. It is one of the best places on the island to taste traditional peka (meat and potatoes cooked ‘under the bell’). They even have a cocktail list inspired by the aromas of the island!

And if you want to imbibe? Korčula may not be known for its raging nightlife, but there is one club on the island you can visit if you’re looking to wear your dancing shoes - Boogie Jungle a few kilometers from Korčula town. Otherwise, Massimo Cocktail Bar is a unique spot for libations you can only reach by climbing a ladder, but we promise the views from the top are worth it! 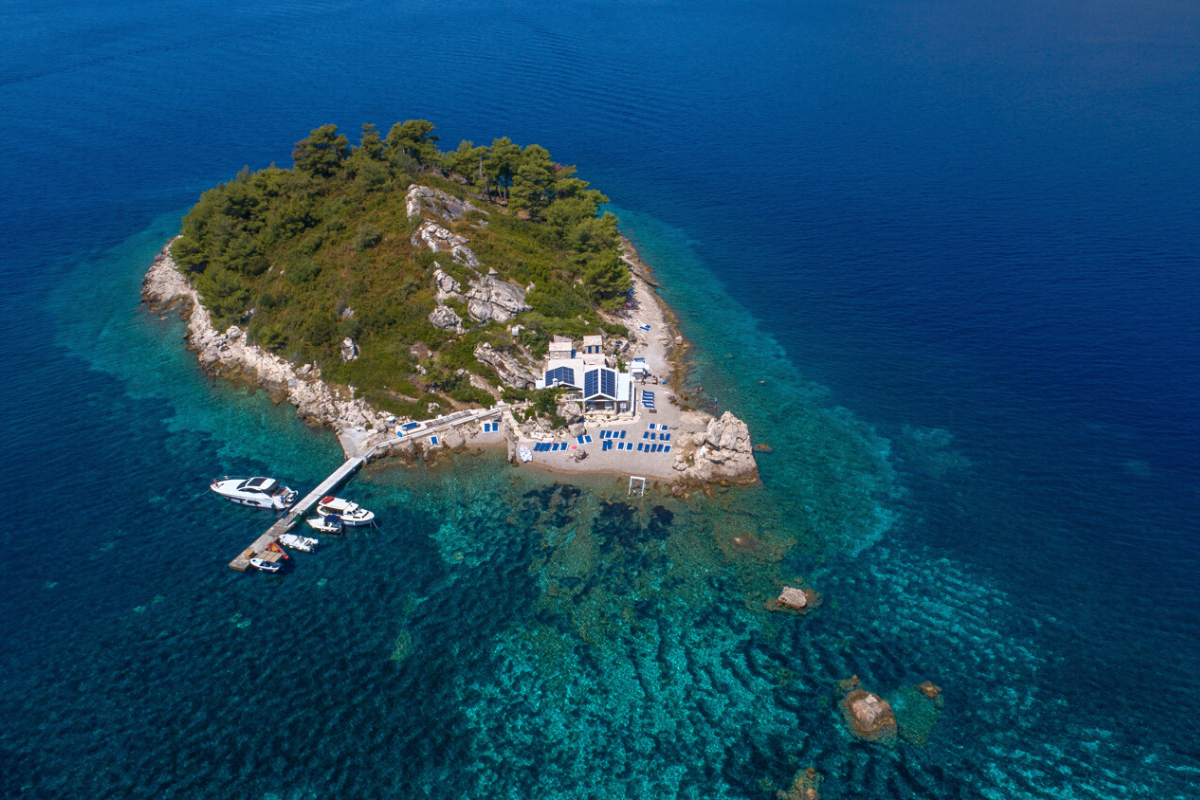 Moro Beach Stupe: This one-of-a-kind concept is located on Vela Stupa island, a short ride from Korčula town. Cocktails, DJs, and Dalmatian bites bring this beach day to the next level - but the stunning cerulean blue setting also helps.

Proizd: This beach wasn’t voted the best in Croatia for no reason. If you’re looking for genuinely untouched nature, that is precisely what you’ll get on Proizd island. A short boat ride from Vela Luka, Proizd charms thanks to its arresting turquoise sea, enhanced by pearl-toned stones that make you feel as if you’ve just entered the gates of heaven. And you have.

Pro tip: there is only one restaurant on the island!

Vela Pržina: And if you’re looking for sand? Head to Lumbarda and Vela Pržina, one of the most popular on the island, which is also great for families! 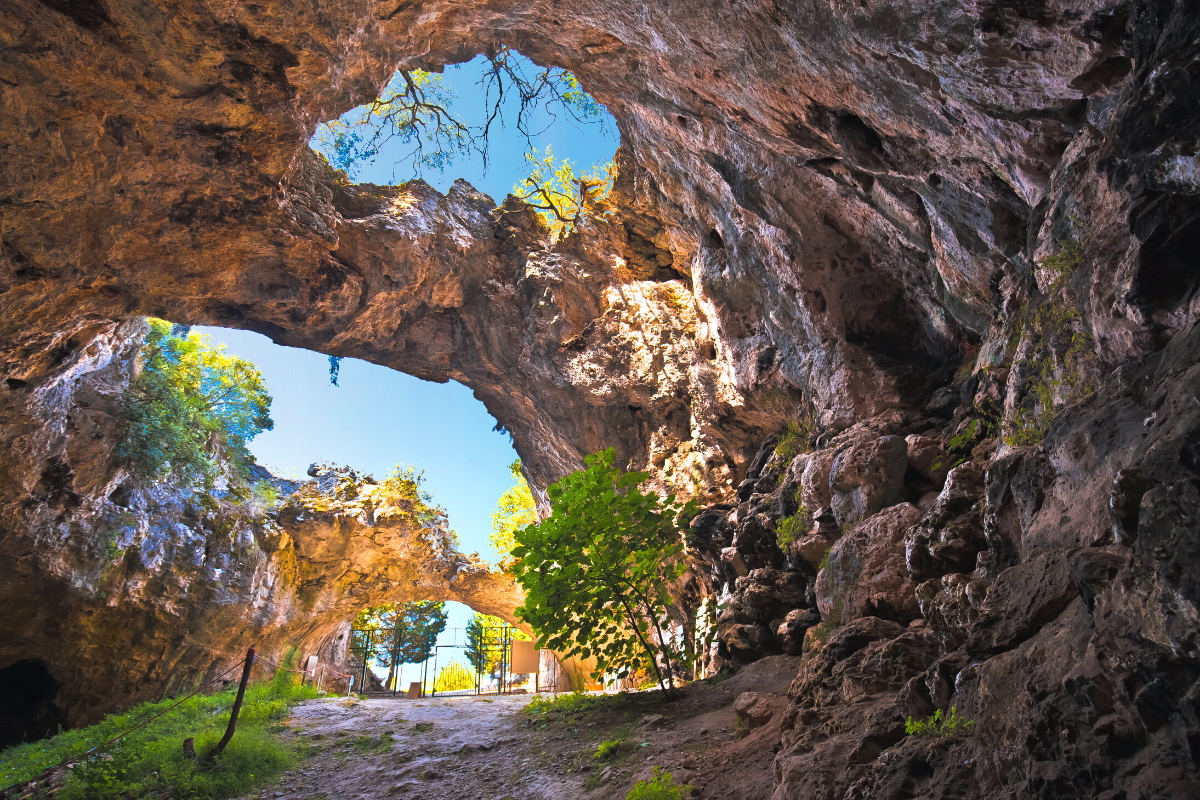 Marco Polo’s house: Marco Polo was allegedly born in a narrow house in Korčula town, which has turned into a museum (with stellar views) you can visit today!

Wine and olive oil tasting: We already mentioned that Korčula is home to Pošip and Grk white wine, with several family-run wineries on the island, but did you know there are over 1,000 olive groves on Korčula, too? Visit a local winery to taste Grk or Pošip or visit a local olive oil producer with PDO-approved (Protected Designations of Origin) liquid gold!

Vela Spila: Okay, we have mentioned this a few times, but how often do you get to visit one of the most important prehistoric caves in Europe? Located on the southern side of Pinski Rat Mountain above Kale cave in Vela Luka, the cave is 1 to 10 meters wide, up to 4 meters high, and offers a beautiful view of the bay, islands, and open sea in addition to incredible archeological artifacts.

Adventure tourism: Hiking, cycling, watersports, and more - this island has it all.