A postcard of the Adriatic plastered on the covers of the world’s most prominent travel magazines. A glitzy and glamorous island that brings the world’s most extravagant yachts every summer. A heaven of after-beach parties and summertime indulgence.

But the island of Hvar is so much more than its most famous town.

Did you know that Hvar is the only island in the world with six UNESCO heritage protections? Or that Hvar is the birthplace of organized tourism in Europe, dating back to 1868? Or that the first public theater in Europe was born in its best-known town in 1612? Or that it is Croatia’s sunniest island, bringing in 2760 hours or around 115 sunshine days per year?

Just a short boat ride from Split and around the corner from the islands of Brač, Vis, and Korčula, Hvar is undoubtedly the Adriatic’s most popular summer hotspot. From the posh party haven of Hvar town to the smaller island gems that bring us back to the origins of its authenticity, this island knows no bounds and has something for all types of travelers, no matter their generation. 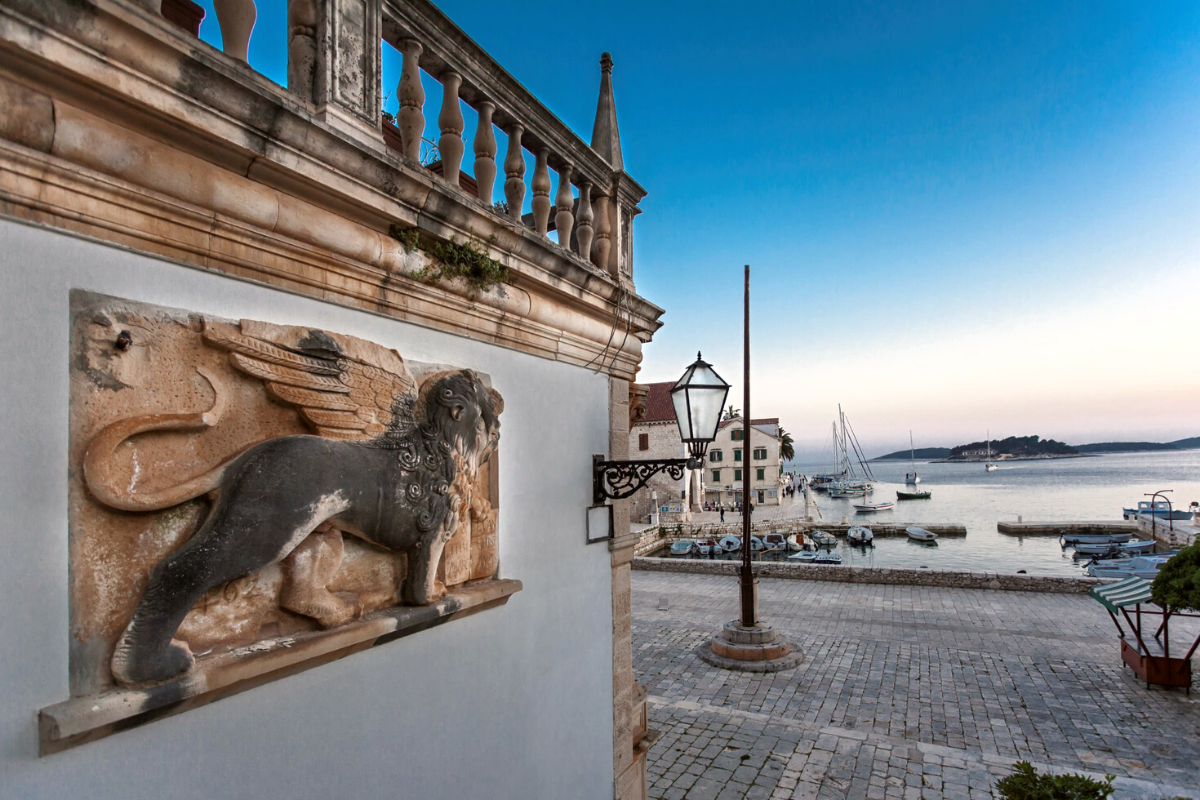 Archeological research reveals that life on Hvar dates back to 3500 BC, with well-preserved Neolithic cave dwellings and archaeological sites that attest to human life on the island some 7000 years ago!

However, Hvar’s history truly begins with Greeks from the island of Paros who founded a colony in the area of today's Stari Grad (Pharos) around 385/384 BC. The first naval battle in the Adriatic was recorded here before Pharos eventually fell under the Illyrian rule. During late antiquity, the island's center moved from Stari Grad to Hvar town.

While numerous turmoils and government changes marked the Middle Ages, a lasting heritage was established thanks to the arrival of Croats and Christianization. During the 6th and 7th centuries, Hvar became part of Byzantine Dalmatia and has been part of the Croatian state since the 11th century.

Hvar experienced a cultural renaissance when it came under Venetian rule In 1278. One of the island’s most important events, the "Hvar Rebellion'', occurred from 1510 to 1514 as Hvar commoners fought for equality against the Venetian nobles and government. The rebellion began in Hvar town and spread throughout the island, though the nobles ultimately maintained their power. There are many reasons to thank the Venetians on Hvar, including building the first public theater in Europe in 1612, today a Hvar town institution of significant national importance for Croatia. The Venetians ruled until the end of the 18th century, when the Republic ceased to exist. 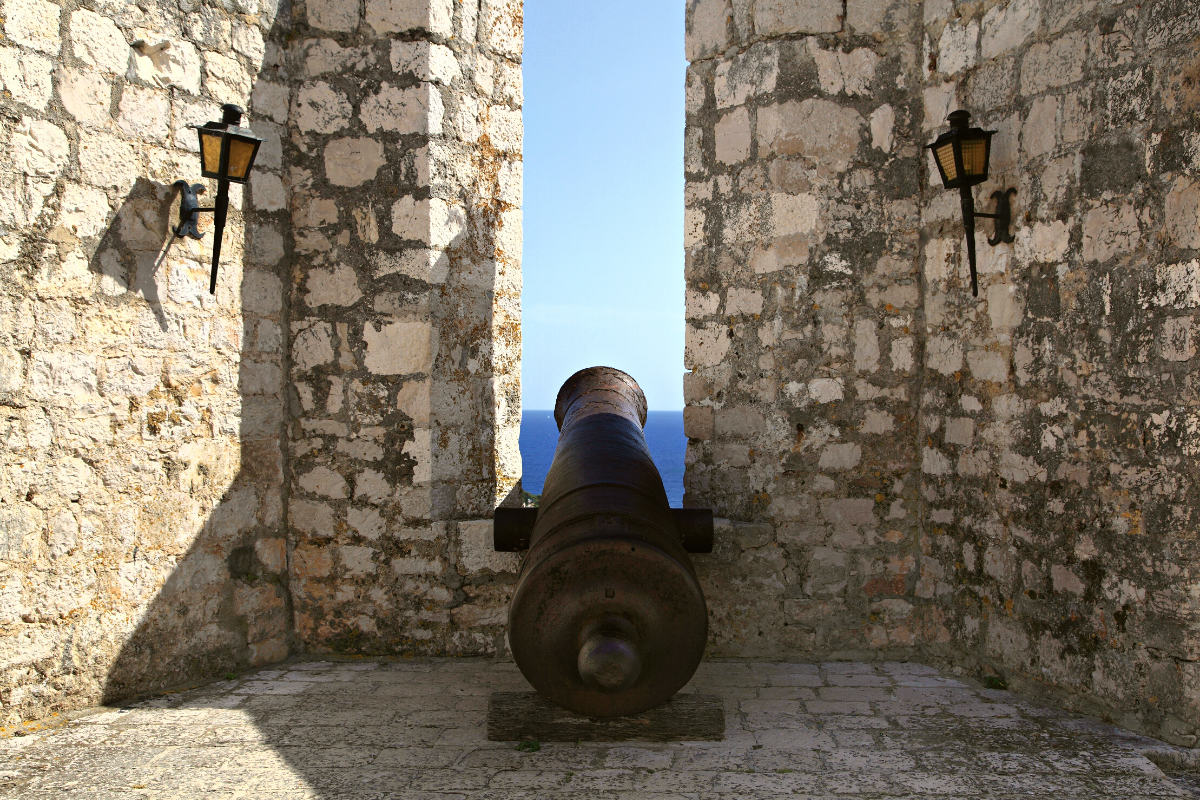 Hvar then came under Austrian rule, which lasted until the end of World War I, during which the first meteorological station in Croatia was founded. In 1868, the first "Hygienic Association" in Europe followed thanks to Hvar’s mild climate and salty sea air.

After Italian rule, the island became part of the newly established Kingdom of Serbs, Croats, and Slovenes, later the Kingdom of Yugoslavia. After World War II, Hvar was part of Yugoslavia, with several hotels built on the island until the early 1990s, which helped the island prosper as it uncovered the traces of tourism. Several of these hotels were used to house refugees during the Homeland War from 1991 to 1995, during which Hvar escaped any damage.

Hvar has flourished thanks to bustling summer tourism and is regularly featured as one of the best islands in the world. You may recall Conde Nast Traveler naming Hvar the best island in Europe back in 2019. We’re here to show you why. 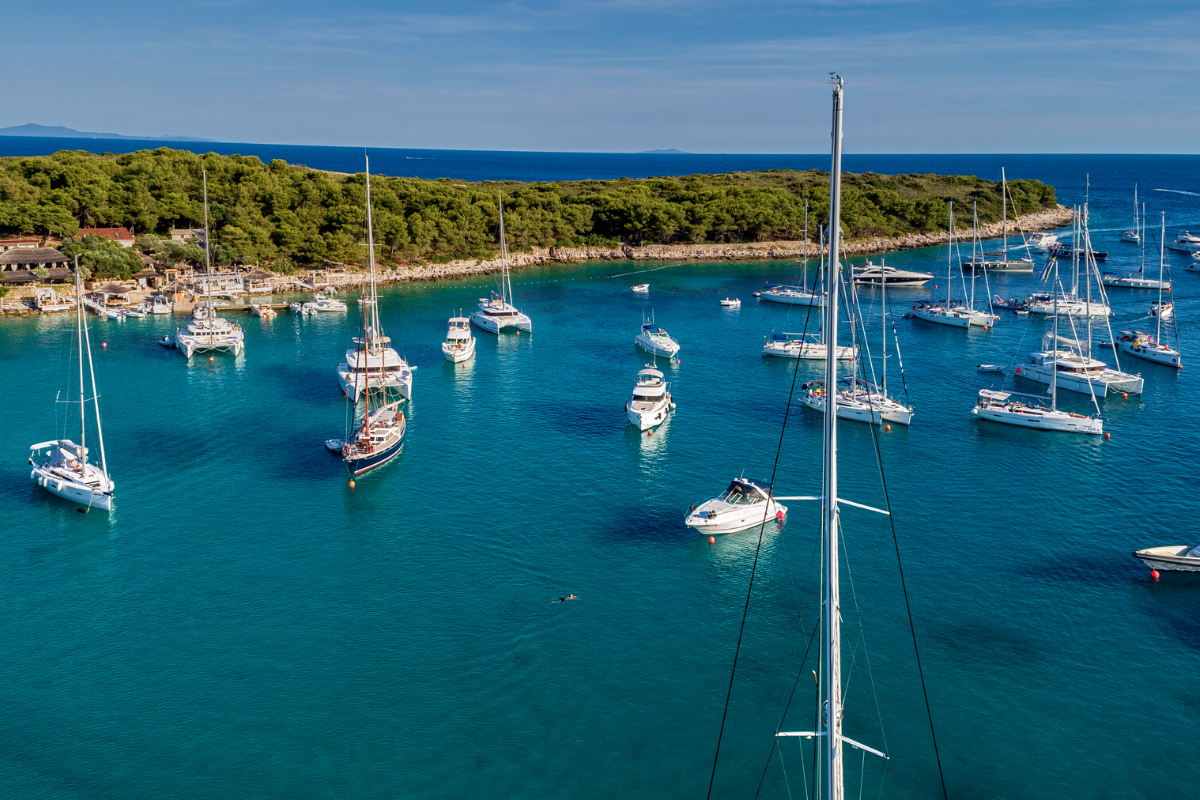 Hvar is a playground for boaters, with many well-equipped marinas and breathtaking bays where you can drop anchor.

While the 100-meter Hvar town waterfront is certainly most in-demand for megayachts and anyone eager to be in the middle of the action, free moorings or buoys in Hvar town are hard to come by in the summer months. However, if you are lucky to lock in one of the 15 Hvar town spots, you’ll find electricity, water facilities, and a marina that is well-protected from the bura wind. We can’t say the same for the southerly jugo wind, though.

And what happens if you can’t hang out in Hvar town? Don’t worry; there are a handful of alternatives.

ACI Marina Palmižana: Located on Sveti Klement island as part of the Pakleni Islands archipelago, ACI Marina Palmižana is just over two nautical miles away from Hvar town, making it an easy hop over. Open from April to October, this marina boasts 160 berths, showers and toilets, a restaurant and cafe, an exchange office, and shops. Not to mention you’ll be enveloped by a dense pine forest and unreal Mediterranean landscapes!

ACI Marina Vrboska: On Hvar island’s northern coast is ACI Marina Vrboska, with 119 berths and 12 dry berths. Located at the end of a deep and narrow bay, this marina ensures you’ll have access to the essential amenities, while the quaint town itself offers restaurants, shops, and cafe bars.

Zlatan Otok Marina: One of the smaller marinas on the list is located in the town of Sveta Nedjelja on Hvar’s southern coast. It is the perfect spot if you’re looking to explore the nearby vineyards or opt for a quieter sailing holiday.

Otherwise, some of the best spots to drop anchor are Zaraće Bay, Tiha Bay, and Vinogradišće Bay, but they hardly scratch the surface of Hvar island’s allure for nautical tourists. 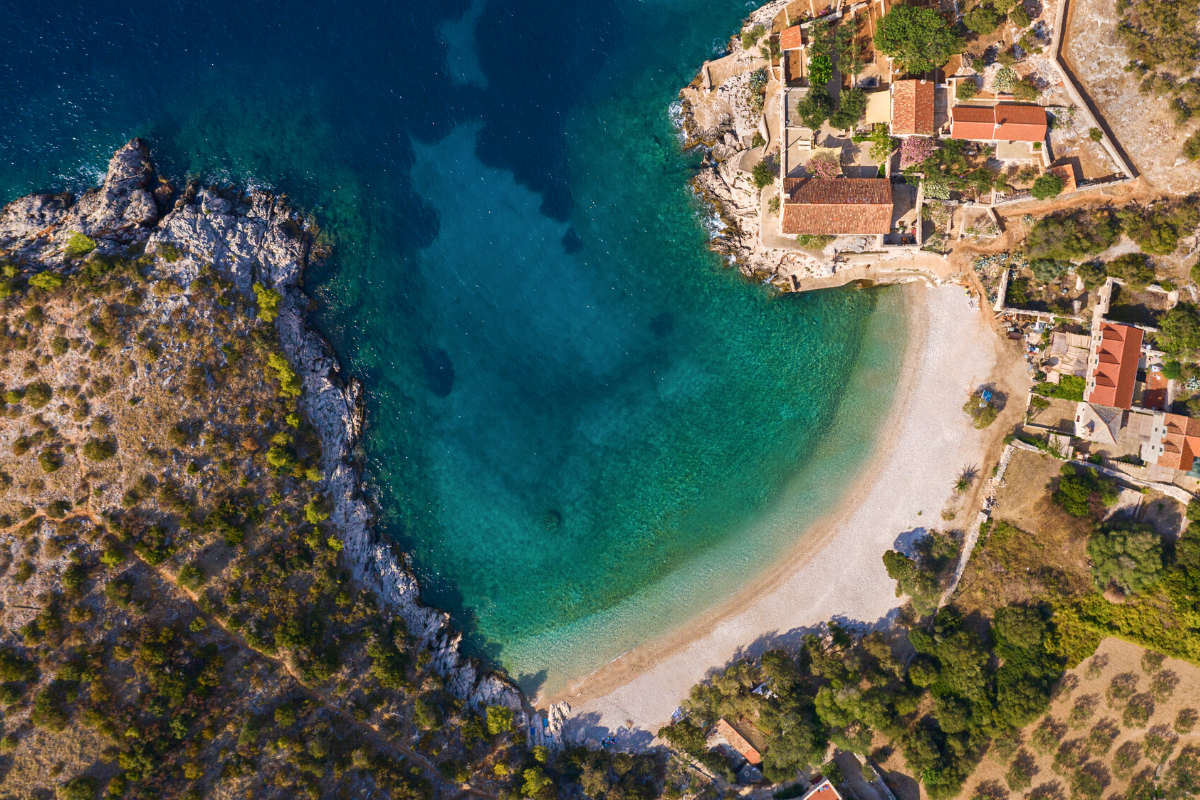 Hvar island is known for its breathtaking beaches, making it nearly impossible to choose where you should spend your day. But if we had to choose…

Dubovica: Around 8 km east of Hvar town is Dubovica, a stunning pebbled beach adorned with a single stone house from the 18th/19th century, charming beach bar and restaurant, and indeed the clearest sea you’ve seen.

Malo Zaraće: Encompassed by red rocks and green pines, this beach used to be one of Hvar’s best-kept secrets - but its beauty could only stay hidden for so long. Don’t expect any amenities here, and make sure you enjoy this tranquil turquoise paradise in all of its glory!

Maslenica: Located on the northern part of the island near the town of Vrboska is Maslenica, another natural gem surrounded by dense pine forest. You won’t find any amenities here, either, so make sure you come prepared.

Pakleni Islands: You can’t go wrong when swimming around the Pakleni Islands, though you’ll find some beaches are more popular than others. Jerolim is an FKK dream where the natural world is enhanced by a restaurant and beach bar, while Stipanska is known for the swanky Carpe Diem beach and full-moon parties that last until sunrise. Vlaka beach on Sveti Klement is best if you’re looking to escape the crowds, and Mlini on Marinkovac offers deck chairs and traditional Dalmatian restaurants as a good choice for families.

Hvar town: The island's most famous town is also its most glamorous. Known to attract posh yachters and party animals, Hvar town has something for all types of travelers. While you shouldn’t miss climbing to Fortica fortress, checking out St. Stephen’s Cathedral, or visiting Europe’s first public theater, you’ll also want to do your fair share of eating and drinking here. Some of Hvar’s most famous restaurants are Gariful and Dalmatino, and if you’re looking to imbibe, check out Ka’Lavanda, Lola, and Vintage Wine Bar, or the after-beach parties at Hula Hula and Carpe Diem. 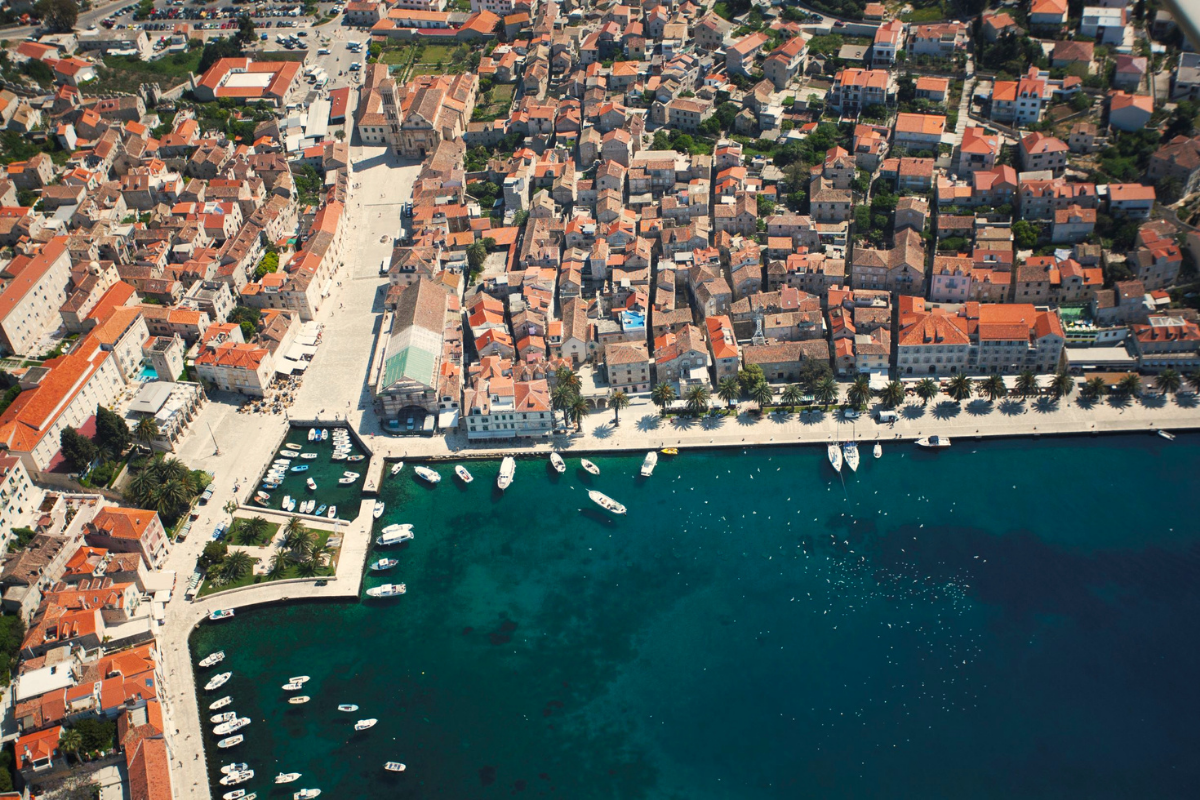 Stari Grad: Stari Grad is a town with over 2400 years of history, which can undoubtedly be felt when you walk the narrow and twisted alleyways of its core. Decorated with art galleries, cafes, and local fare, Stari Grad is also known for the Stari Grad Field, a UNESCO-protected agricultural landscape used by the Greeks in the 4th century BC. 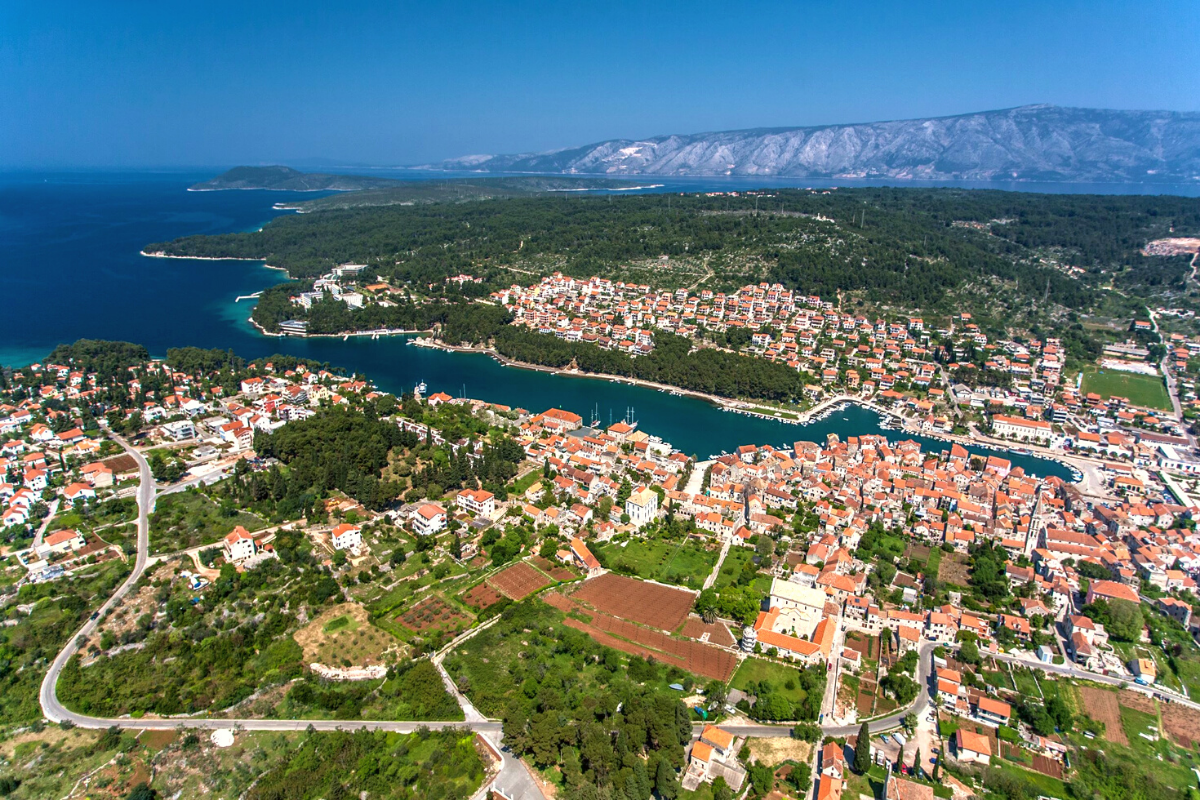 Vrboska: Hvar island’s smallest town is tucked into a deep bay and adorned with bridges, which confirms why it is often called ‘Little Venice’. This fishermen’s village pays tribute to its inhabitants with the unique Fishermen’s Museum, while you can gawk at the Gothic, Renaissance, and Baroque style architecture throughout the town.

Jelsa: Situated in the center of the island and enveloped by the peaks of St. Nikola and Hum mountains is Jelsa, today a popular tourist town with its oldest hotel opened in 1911. Founded in the 14th century (though traces reveal it was established long before), this seaside town boasts baroque chapels and is lined by pines and palm trees, olives, and vineyards. Don’t miss the ancient Greek fortress Tor! 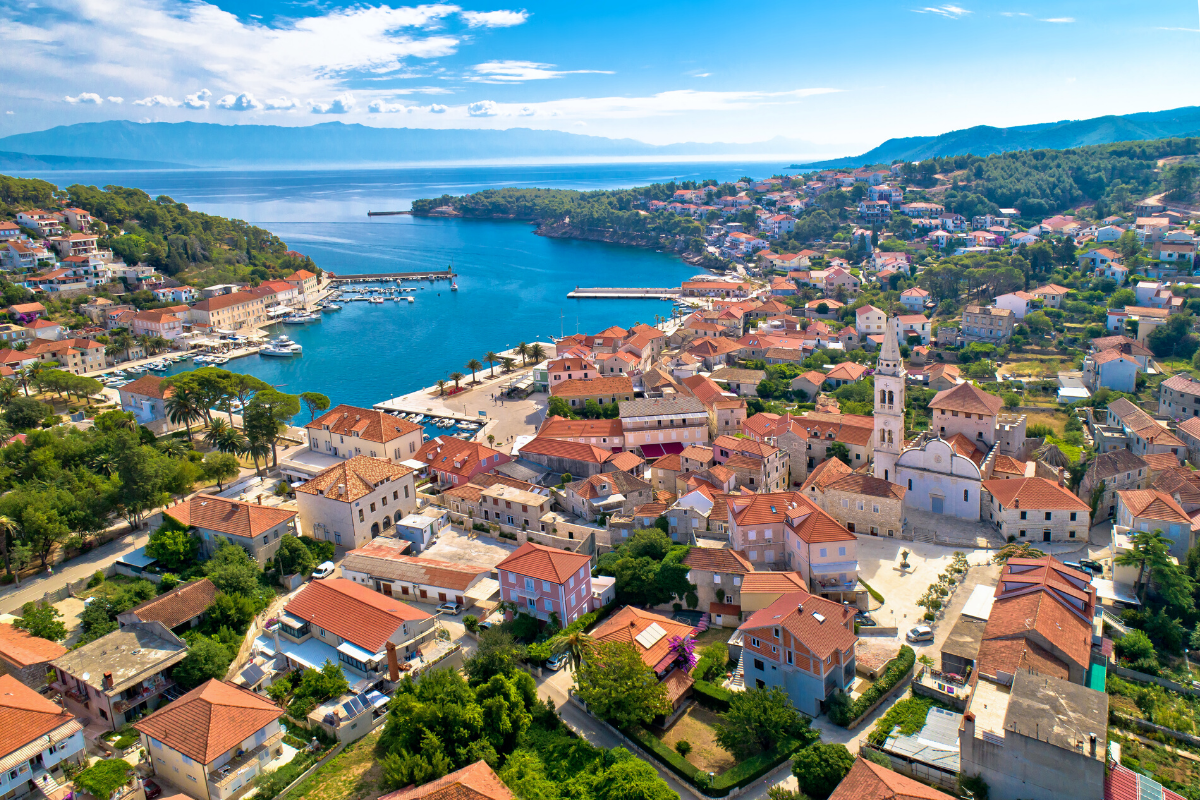 Sveta Nedjelja: Located on Hvar’s southern coast, Sveta Nedjelja is a village at the foot of the island’s highest peak - St. Nikola. Where the mountain meets the sea, Sveta Nedjelja is much quieter than Hvar’s more popular towns, though it is famous for its vineyards, especially Zlatan Plenković. You’ll also want to check out the impressive Neolithic cave above the town! 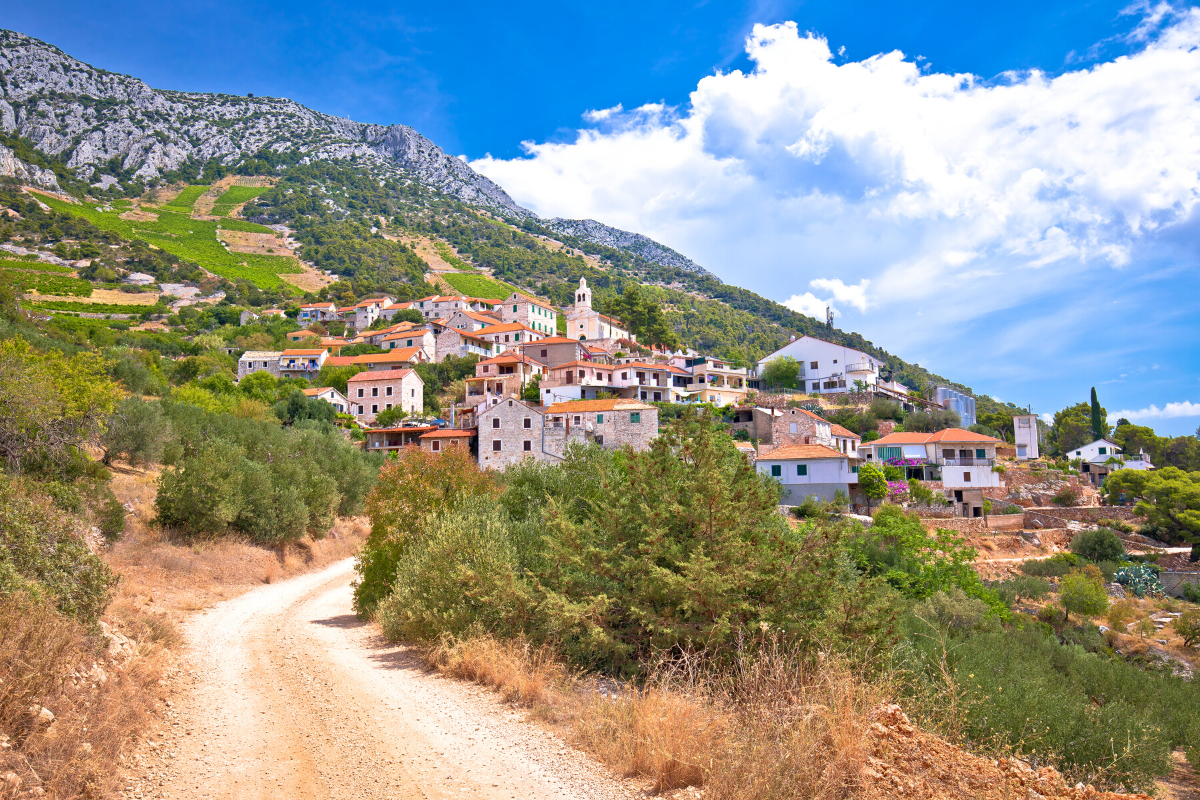 Pakleni Islands: The dreamy Pakleni Islands off the coast of Hvar are not just an Adriatic paradise for boaters. This chain of 21 islands, islets, reefs is also a go-to for foodies and bon vivants looking to indulge. Arguably the most popular is Laganini on Palmižana, a restaurant and beach lounge where the sounds of a DJ enhance standout seafood dishes, oysters, and champagne. If you’re looking for something a bit more low-key, the Dionis restaurant on Sveti Klement is a rural gem set in the middle of an olive grove. And if you’re looking for somewhere to take the kids? Marinkovac offers a handful of family-friendly restaurants with traditional cuisine. 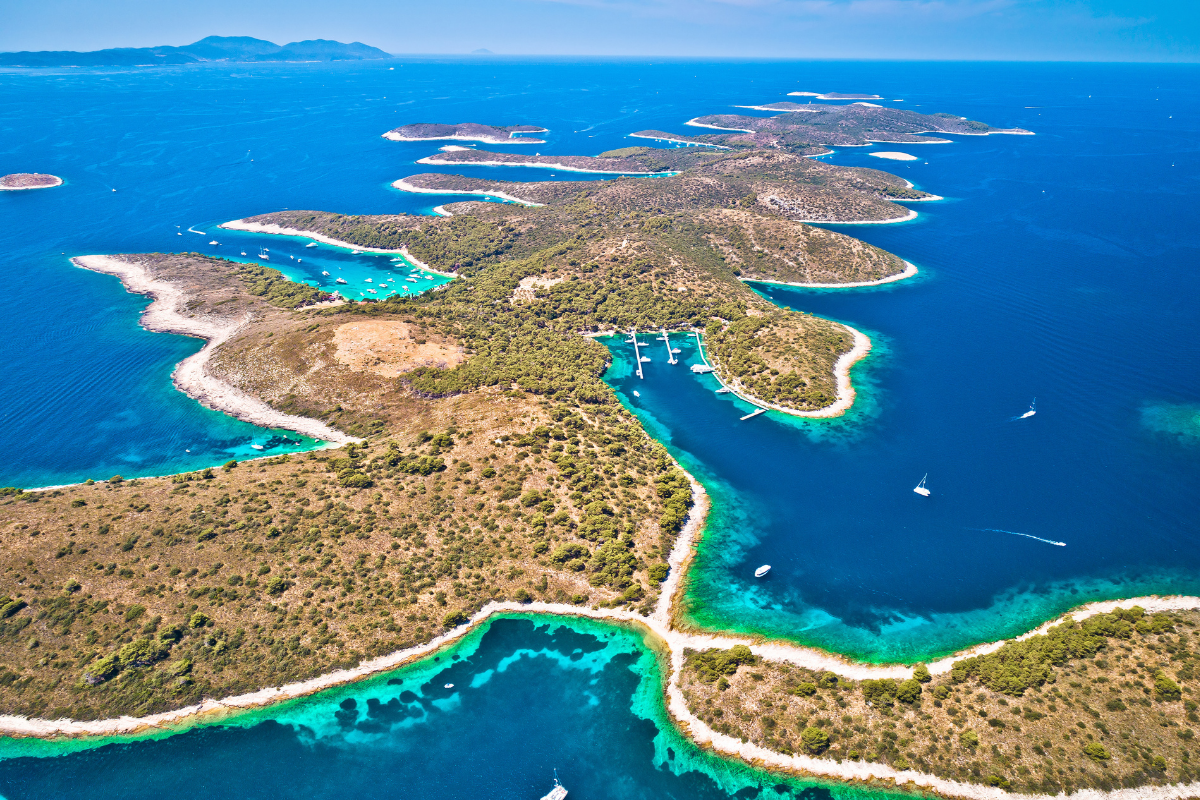 Velo & Malo Grablje: If you want to trade the sea for an authentic inland experience, dive into the past in Velo & Malo Grablje, nearly deserted villages surrounded by olive groves, vineyards, and lavender fields. Velo Grablje was once the leader of lavender oil in Europe and hosts the island’s famous Lavender Festival each year. At the same time, Malo Grablje boasts one of the island’s best restaurants for Dalmatian specialties like ‘peka’  - Stori Komin. 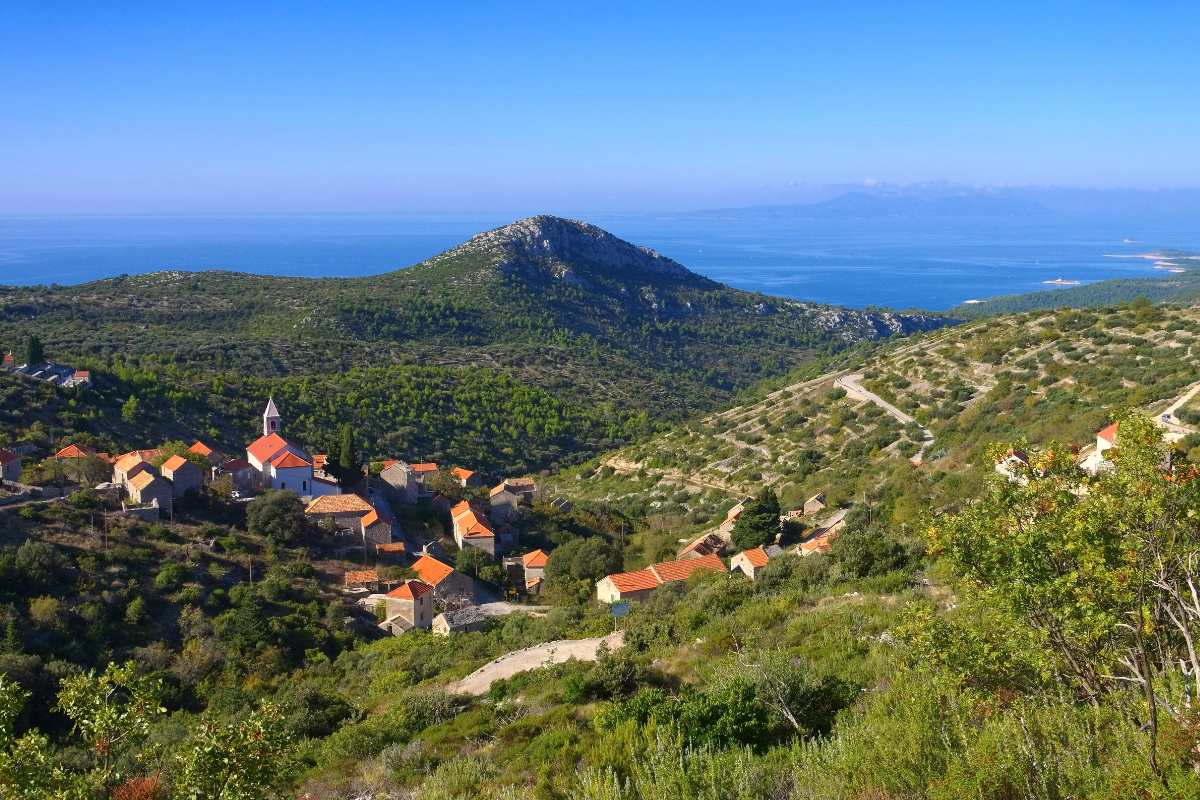 Brusje: Another inland village with rustic stone houses and 16th-century villa ruins, the former shepherd’s village of Brusje is one of Hvar’s most famous ethno-eco villages where olive oil, honey, wine, and lavender are in focus. 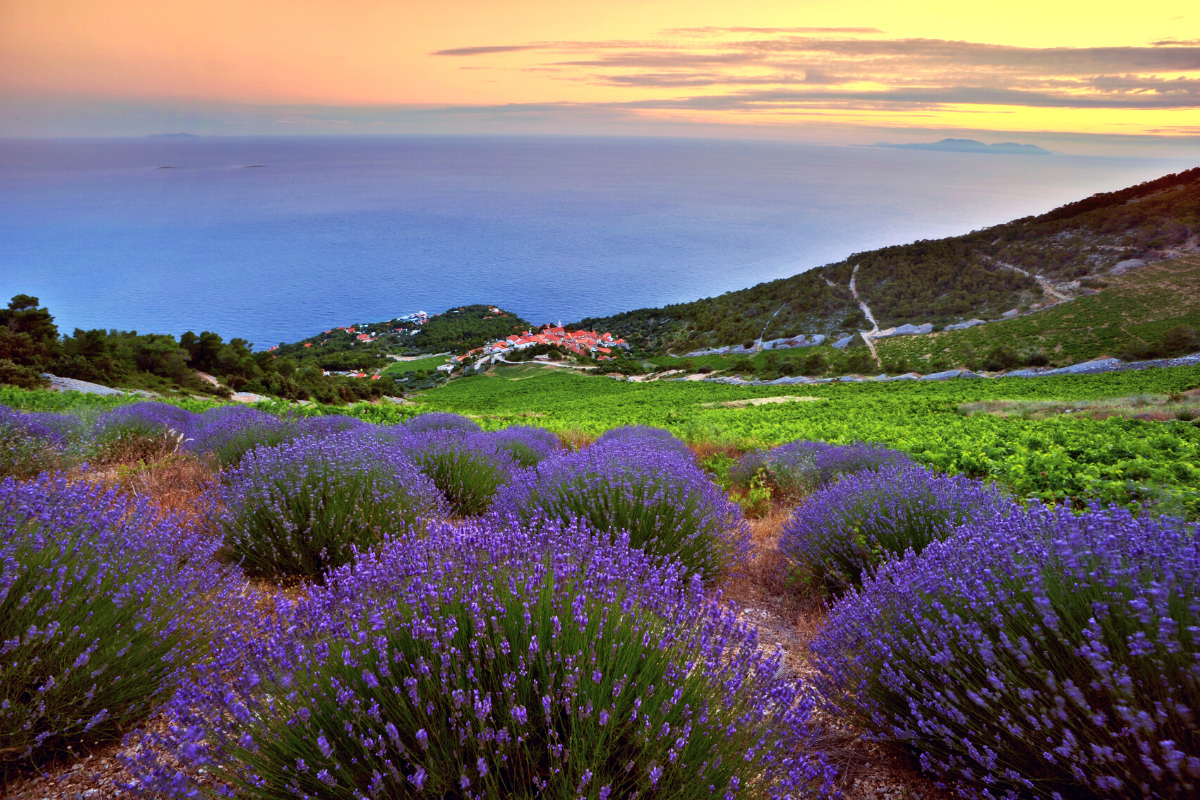 History: There are too many historical attractions on the island to name, but if we had to narrow them down for a must-visit bucket list - St. Stephen’s Cathedral, Fortica fortress, Hvar theater (Arsenal) and Franciscan Monastery in Hvar town, Castle Tvrdalj and Stari Grad Plain in Stari Grad, St. John’s Church and Tor in Jelsa, and St. Mary’s Church and the Fishermen’s Museum in Vrboska. Each town also has a busy waterfront and bustling squares, presenting the perfect ambient to live like a local, sip coffee, and people watch.

Grapčeva Cave: Located on the southern side of Hvar, Grapčeva is considered an important prehistoric site in the Adriatic with roots back to the 4th millennium BC! This cave not only abounds in stalactites and stalagmites but the oldest depiction of a ship in Europe was discovered here, making for a truly unique outing. 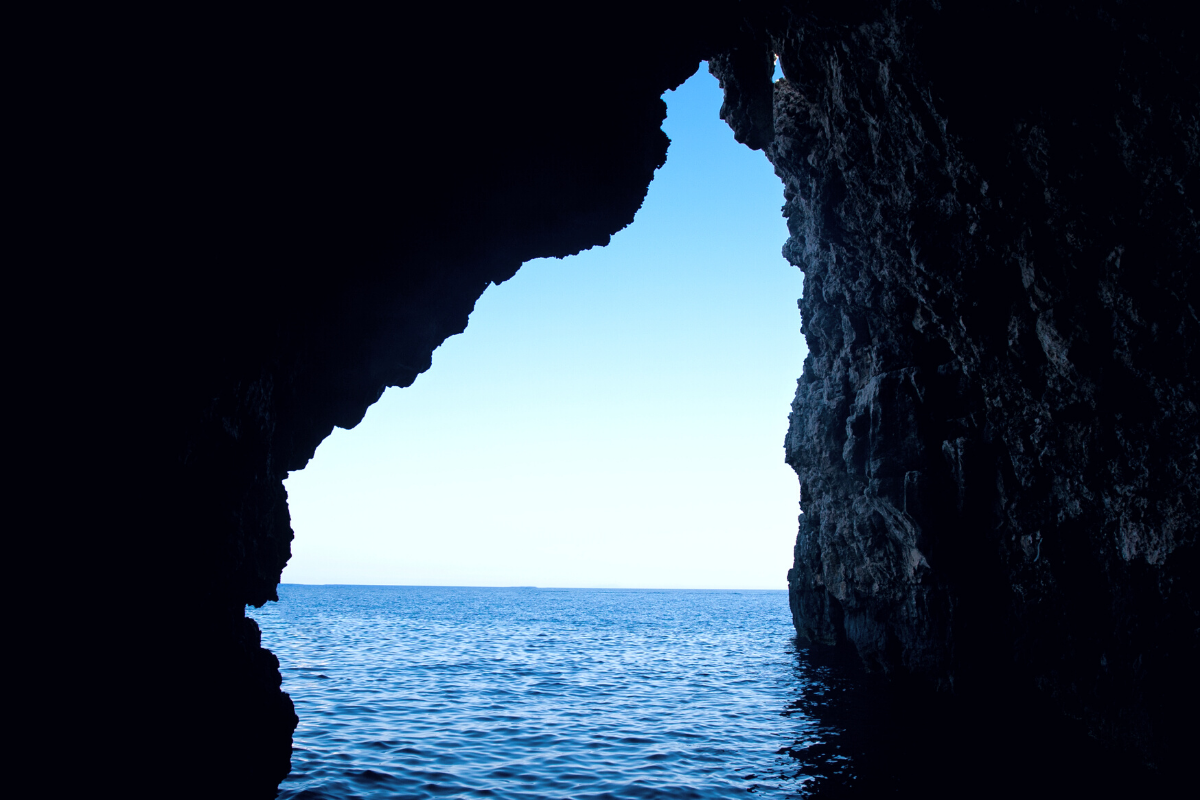 Wineries: A haven for wine lovers with several wineries to visit, Hvar’s wine tradition dates back some 2,400 years, with the native Plavac Mali, Prč, Maraština, Bogdanuša, and Pošip grapes highlighted on the island. Where viticulture thrives thanks to the island’s sunny slopes, you don’t want to miss the tasting rooms at Tomić, Duboković, Zlatan Otok, and Carić wineries!

Adventure tourism: Whether you prefer hiking, cycling, rock climbing, or diving, Hvar’s terrain was made for travelers looking for an adrenaline kick. From olive groves to lavender fields, UNESCO-protected landscapes to ancient fortresses and abandoned villages, and a vibrant underwater world just below your boat (bookmark Sitka do Vodnjoka), Hvar and its foolproof Mediterranean climate attracts everyone to the outdoors.