Zadar, a Croatian coastal gem that mixes ancient history and Mediterranean marvels, lies northwest of Ravni Kotari, southeast of Rijeka, northwest of Šibenik, and some 150 km north of Split. The city of Zadar sits on a peninsula where the mainland, port, and Jazine Bay meet, while the Zadar archipelago includes around 300 islands and islets, making it a dream for boaters.

Alfred Hitchcock was not wrong when he said Zadar had the most beautiful sunset in the world on his 1964 visit, though his famous words are hardly the reason for Zadar’s popularity today. Zadar is demographically and spatially one of the fastest-growing cities in Croatia, especially since the mid-20th century. The strong development of tourism in the last twenty years has been stimulated by improved communal, tourist and transport infrastructure. Whether you travel by plane, highway, or sailing yacht, Zadar is another hard-to-miss Croatian destination that is easier to visit than ever. 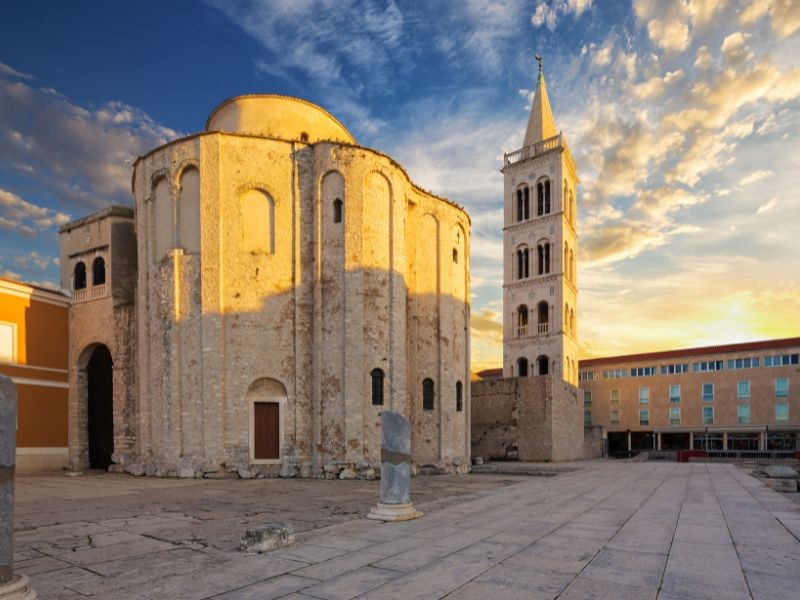 Zadar was inhabited already in the late Stone Age, and the Puntamika and Arbanasi settlements in the Zadar area date to the late Neolithic era.

Zadar was an important center, anchorage, and port for trade during the Liburnian era. The Liburnians later built the future Roman Empire when Zadar was urbanized and became the center of the Eastern Adriatic. The ruins of the Forum are a testament to Roman rule in Zadar today.

Zadar rivaled Venice during the Byzantine Empire as a critical Dalmatian free commune and center of Dalmatia, with advanced urban development and shipbuilding progressing. The Dominicans also founded the first University on Croatian territory in Zadar at the end of the 14th century.

Venetian rule came from the 11th to 14th centuries before the Ottomans threatened in the 16th and 17th centuries. The latter forced Zadar to become the biggest city-fortress in the Republic of Venice, which is included in UNESCO's World Heritage List today.

After the fall of Venice in the 18th century, Zadar came under Napoleon's rule, and the city was modernized. Zadar also became an administrative center during this time, and the first newspaper in Croatian, Kraglski Dalmatian, was released. The Austrian army entered the city after the fall of Napoleon in 1813 and ruled until 1918. Until the end of World War I, Zadar was the capital of Dalmatia.

Zadar also thrived under Austrian rule, as the city transformed with modern squares, public spaces, coffee shops, hotels, libraries, and printing houses. Over 30 liqueurs were produced in Zadar during this time, of which you may have heard about ‘Maraschino’. Interestingly, Croatia's first electricity distribution network was installed in Zadar at the end of 1894.

Zadar was rebuilt during the Yugoslav era as it suffered bombings to its historic center during World War II. It was then that Zadar’s industrialization flourished, and shipbuilding and tourism were at the forefront of its progress.

Zadar today is the center of Zadar County, where tourism thrives thanks to a modern port and passenger terminal, a motorway connected to the capital Zagreb, and an airport that connects the city to all of Europe. 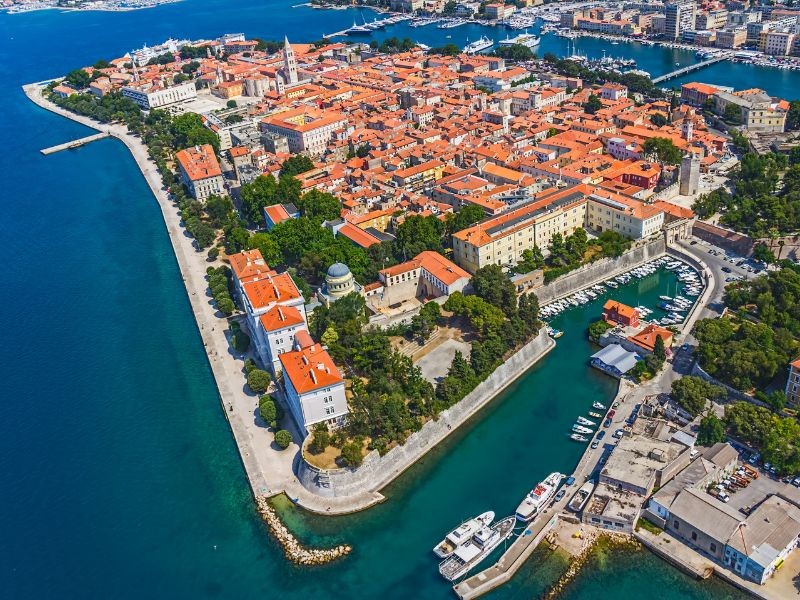 The Zadar Marina is a popular place for boaters to start their nautical adventure, located in the center of town with 300 sea berths. Known as a refuge for sailors, it is well-protected from the wind and can accommodate yachts up to 50 meters long. Marina Zadar also proudly carries the Blue Flag as an ecologically safe and well-maintained marina.

But Zadar Marina isn’t the only one with easy access to the nearby islands and islets. D-Marin Borik is a slightly smaller boutique marina near the town and next to the Borik tourist complex. With 177 sea berths available, D-Marin Borik can accommodate yachts up to 30 meters. This marina is also well-protected from all winds and remains open year-round. You can even find a Tesla charging system here! 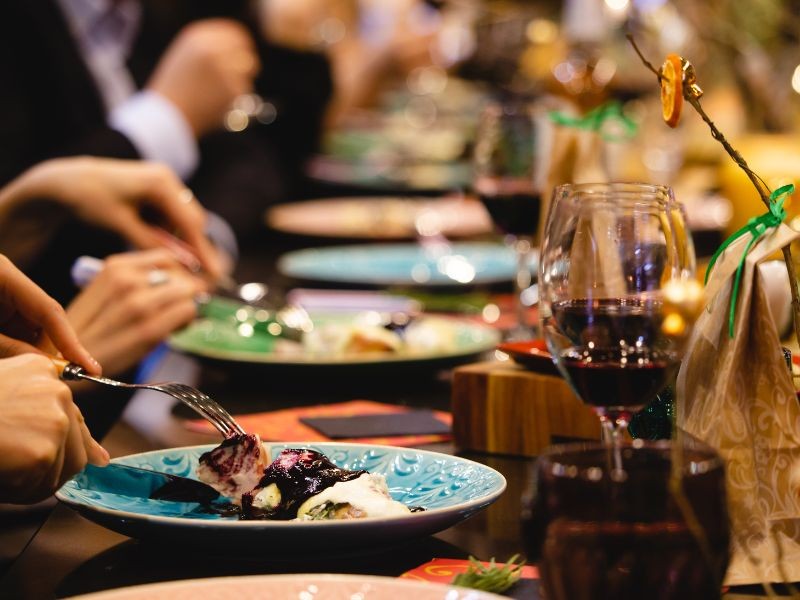 When visiting Zadar, you can’t miss Foša, a seafood restaurant in the Foša port, close to Zadar’s ancient walls. Foša combines old Dalmatian recipes with modern trends, with local ingredients as the highlight of each dish. Foša is also a member of the prestigious JRE and is famous for its tasting menu and wine pairings.

One of Zadar’s top restaurants is Al Pacchero, located in the old town with tables lining the street. A slightly upscale take on Mediterranean classics, Al Pacchero mixes freshly-caught seafood, homemade pasta, and top service to promise one of the best dining experiences in town.

And for something a bit more homestyle? Trattoria Mediterraneo sits in the heart of the old town, serving simple and delicious Dalmatian cuisine, local wines, and even Zadar craft beers. But once you’ve had your dose of tradition, head to the chic Butler Gourmet & Cocktails Garden, where modern eats meet craft cocktails on the coast!

And where to pop in for a swim? Borik is Zadar’s most famous beach, though it isn’t quite in the center. Stretching about 1.5 kilometers down the coast from Falkensteiner Club Borik, this beach offers pebbles with some sandy parts and natural shade from the pines. Beachgoers can also find loungers and umbrellas for rent, while there are some beach bars and ice cream shops should you need a refreshment.

Kolovare is just south of the old town and is considered one of Zadar's best bays. This beach has something for everyone, from fine pebbles to concrete slabs, natural shade, and umbrellas for rent. Did we mention there are beach cafes and restaurants, too?

And we can’t forget one of the most breathtaking Zadar beaches - Punta Bajlo. This picturesque pebbled beach is set on a forested peninsula, making it a foolproof place to kick back and relax. While it’s not entirely close to the old town (about 3 kilometers), it's a hot spot for locals and tourists. 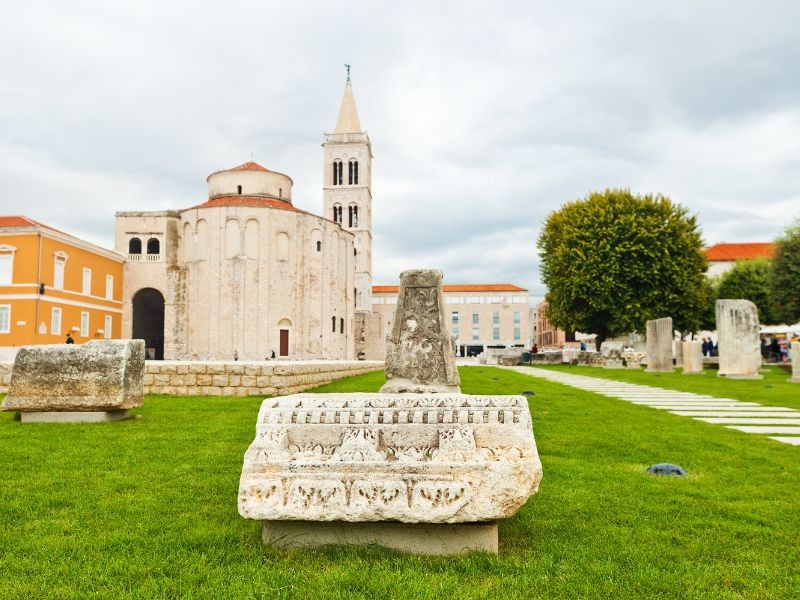 Monument to the Sun: This not-to-miss installation is designed by renowned Croatian architect Nikola Basic. Created from 300 photo-sensitive glass plates, this illuminated installation takes in the sun’s rays to produce a colorful light show at night. Located on the Zadar waterfront, traditionally known as the best sunset-watching spot, the Monument to the Sun is one of Zadar’s top attractions today!

Sea Organ: But that’s not all Nikola Basic brought to Zadar. The famous Sea Organ is located near the Monument to the Sun and is an experimental musical instrument powered by sea waves! The harmonic sounds play on the coast as one of Zadar’s unique tourist spots.

Zadar Old Town: Zadar’s old town acts as an outdoor museum of ancient architecture that tourists can gawk at during their stay. And considering the city’s Roman and Venetian rule over the years, this influence has not gone unnoticed. The Venetians were responsible for fortifying Zadar, seen in the city walls and gates still standing today. Other ancient attractions you won’t want to miss are the 1st century Roman Forum ruins, the Treasury of the Franciscan Monastery, the Museum of Ancient Glass, and the monumental Romanesque Saint Anastasia's Cathedral.

The Museum of Church Art hosts a collection of Zadar’s gold, silver, paintings, and sculptures within the Benedictine Monastery of the Church of St. Mary. It is one of Zadar’s most significant displays of religious artifacts today.

A trademark of Zadar, however, is its medieval St. Donatus basilica, the largest Byzantine building in Croatia. This 9th-century church was built by Donatus of Zadar, and while it no longer acts as a place of worship, its acoustics are used to hold musical evenings in the summertime.

And if you want to get a better idea of Zadar’s rich history overall? Pay a visit to the Zadar Archaeological Museum, the second oldest museum in Croatia, founded in 1832.

Don’t forget to stroll around People's Square, a center of local life since the 16th century. Enveloped by the City Guardhouse and a large 18th-century clock tower, it bustles with locals and tourists no matter the time of year.

And finally? Listen to Alfred Hitchcock to witness the most beautiful sunset in the world. No matter where you may be in Zadar when the sun dips down behind the sea, we promise it will be the most spectacular you’ve seen.