A Renaissance, Baroque, Romanesque and Gothic dream that sits on Croatia’s coast, with UNESCO charm and Mediterranean calm. Meet Trogir, a museum town that abounds in history, artistic masters, and magnificent stone buildings that have survived its turbulent past.

A narrow islet just 500 meters long and 250 meters wide, Trogir is located just a few minutes away from the busy Split Airport and 30 minutes away from the city of Split. Whether you’re on a romantic outing or have the family in tow, Trogir’s bustling cobblestone alleyways, traditional taverns, curious galleries and shops, and outstanding architecture are wrapped in Dalmatia’s laid-back attire to ensure all modern travelers have something to uncover.

Protected by UNESCO in 1997 as Central Europe’s best-preserved Romanesque-Gothic town, Trogir’s cultural and nautical heritage mix to form one of Dalmatia’s most frequented destinations today. 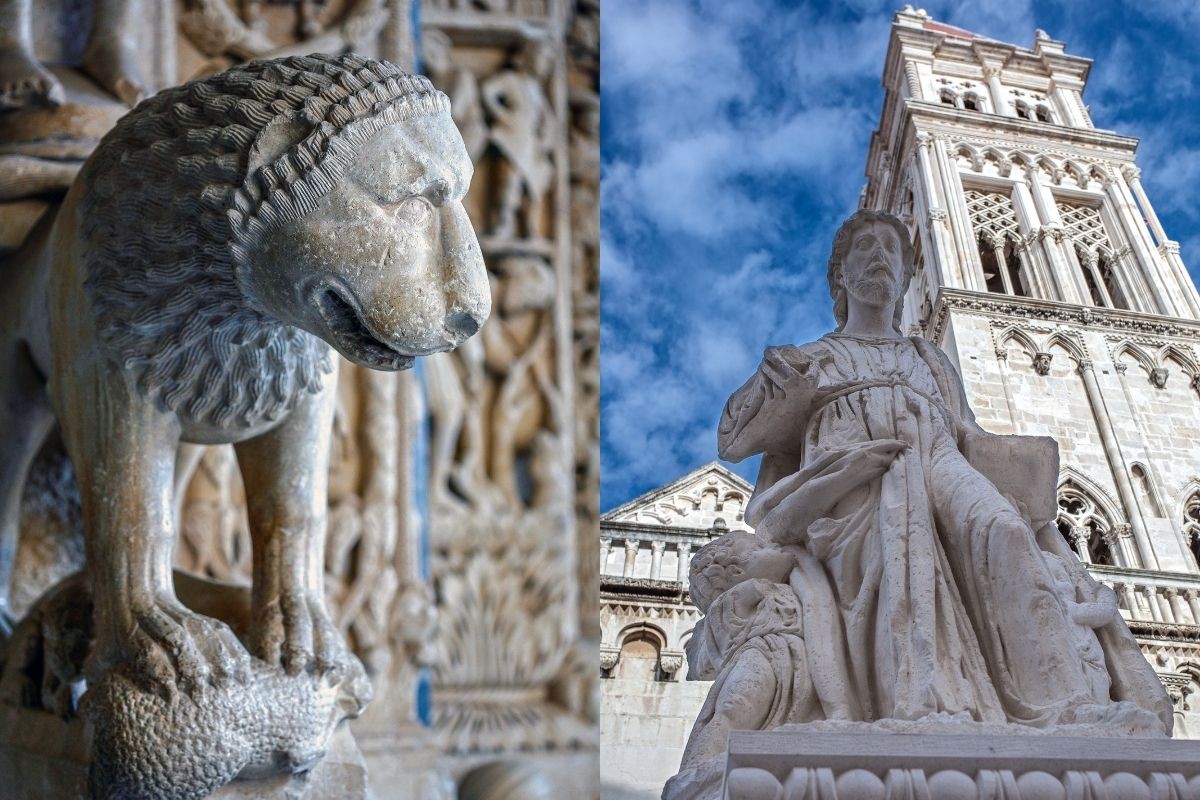 While Trogir dates back to prehistory, it wasn’t until Greeks from Vis founded the settlement Tragurion in the 3rd century that the town was established and ultimately developed into a major port. While the Romans conquered Tragurion, changing its name to Tragarium, it wasn’t nearly as important as the nearby capital of the Roman province of Dalmatia - Salona. After the Slavs and Avars destroyed Salona, Trogir saw a political and economic awakening.

Once the Western Roman Empire fell, the Byzantines came in, followed by the Croatians, Normans, Venetians, and Bosnians over the next 1,400 or so years. The first pharmacy in Croatia opened in Trogir during this time (1271), and the most crucial period for Trogir was under Venetian rule when artists and masters made their architectural marks on the buildings we can see today.

Austrian and French rulers came in next, which had their pros and cons. While the French introduced fundamentals in the town like literacy, agriculture, and health, the Austrians diminished Trogir’s medieval feel as some buildings and churches were demolished.

Trogir became part of the new Yugoslav state along with the rest of Croatia in 1920, before the Italian occupation during WWII. During the People’s Republic of Yugoslavia, Trogir was recognized for its shipbuilding industry, while tourism finally flourished in the town during Croatian independence. After Trogir was named a UNESCO World Heritage site in the late 1990s, it has attracted travelers from all over the world. 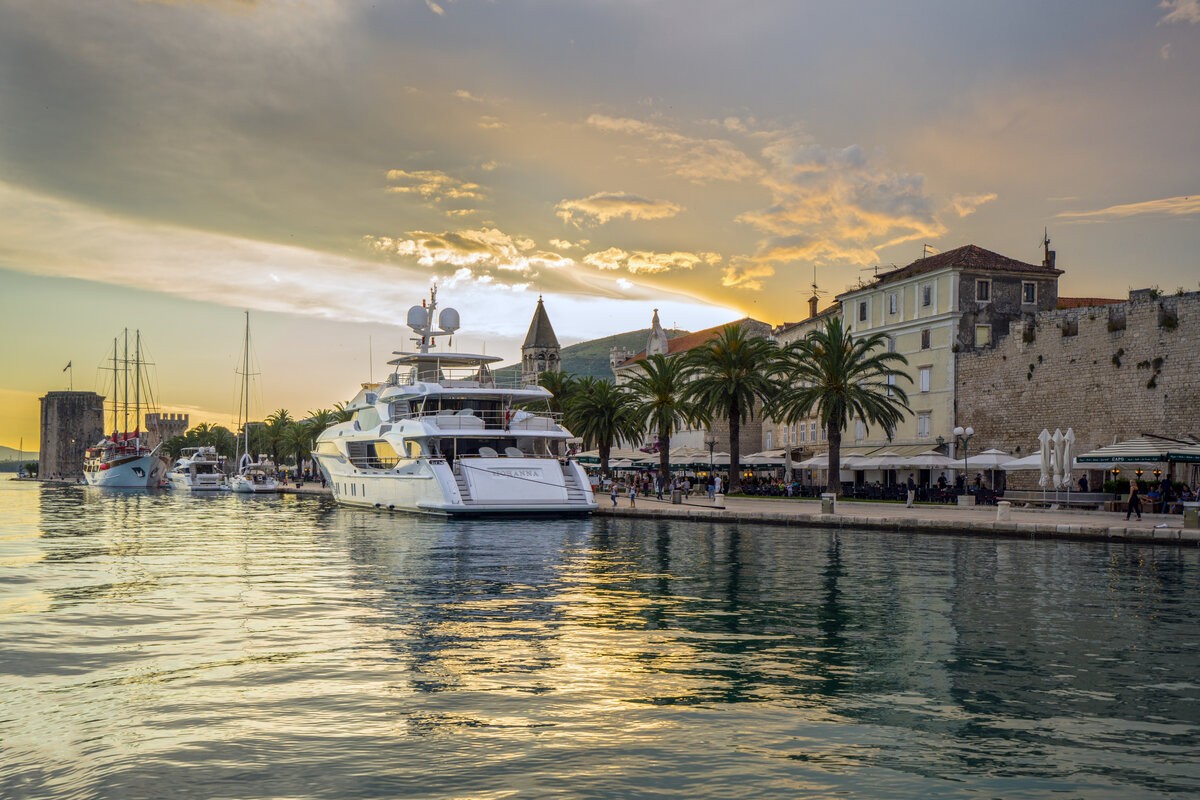 ACI Marina Trogir: Located opposite the Trogir old town on the island of Čiovo, ACI Marina Trogir boasts 174 berths and 35 dry berths. Awarded 3rd place in the “Tourist Flower – Quality for Croatia” in 2017 for one of the best small marinas on the Adriatic, this ACI marina has it all. Whether you need a reception, laundry, wellness center, fuel station, toilets, showers, groceries, and more, boaters can enjoy a list of amenities within reach of Trogir’s attractions.

Marina Trogir: With 260 sea berths for 10 to 60-meter yachts, Marina Trogir is located on the northern end of Čiovo in a well-protected bay. Open year-round, boaters can also enjoy an array of services, from a snack bar to a nautical equipment shop and more, no matter the time of year!

And if you want to drop anchor nearby? We suggest circling around the island of Čiovo or heading to Krknjaši’s Blue Lagoon, located on Drvenik Veli island. Once you take notice of this explosive palette of blue hues, you’ll understand why, too. 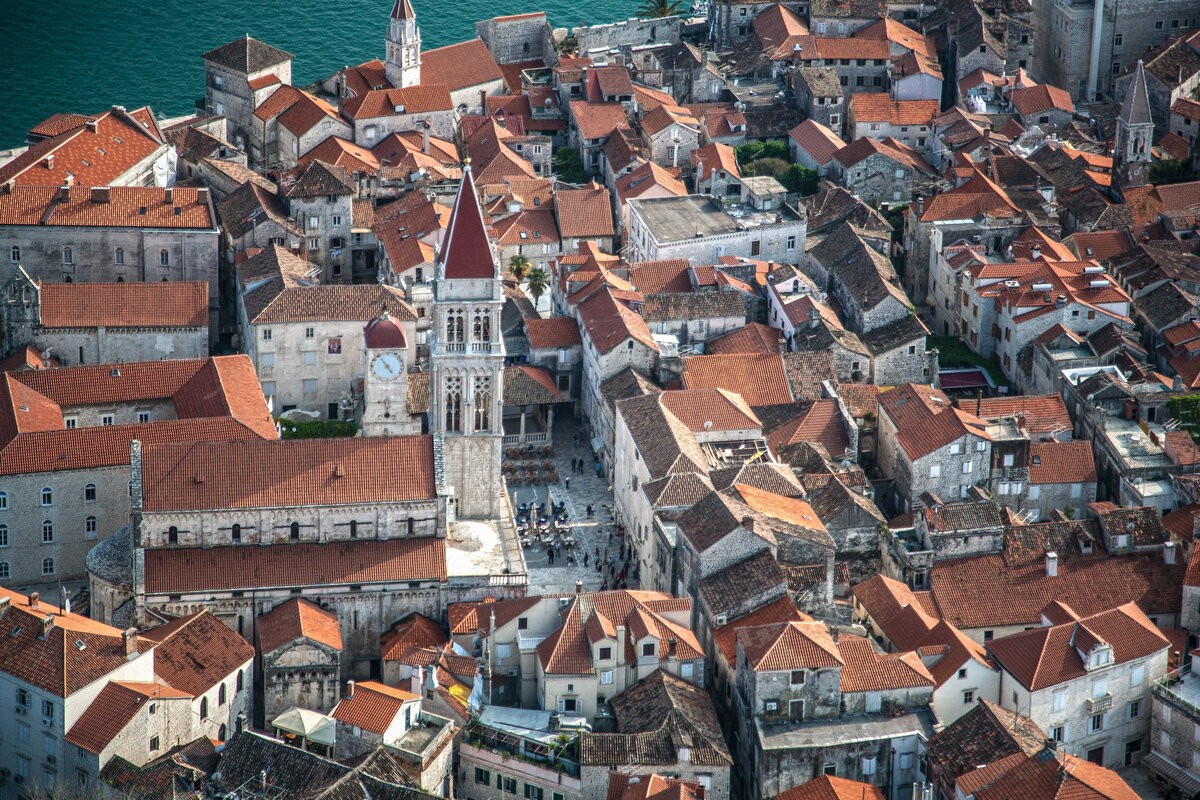 Franka: A newcomer to the Trogir restaurant scene is Franka, breathing new life into the historic old town with their kitchen & wine concept. With Mediterranean cuisine, fresh cocktails, and Croatia's best wines at the forefront of its philosophy, Franka’s dining experience is enhanced by its chic decor, a quaint courtyard, and innovative take on Dalmatian classics. Did someone say beetroot & truffle risotto?

Alka: Alka is a Trogir trademark serving its locals since 1966. Built on family traditions and Adriatic specialties, Alka’s spacious terrace is a hotspot in the summer months, where eager eaters choose from family favorites like drunken lobster or black pasta with cuttlefish.

Kamerlengo: Located in the heart of Trogir’s historic core is Kamerlengo, where Dalmatian specialties meet ancient recipes. The whimsical stone courtyard is enhanced by the smoke from the grill, while a full aquarium of the day’s best catch greets you as you enter from the cobblestone alleyway.

Don Dino: Known as the first and only fine dining restaurant in Trogir, Don Dino certainly lives up to the hype. Not only does it boast a spacious terrace next to a bustling central street, but Don Dino promises to remain loyal to local tastes and Mediterranean culinary customs - and they even have a sushi corner!

Trogir’s waterfront promenade is lined with cafe bars where Aperol Spritz is the drink of summer. You won’t find it hard choosing somewhere to park for a cocktail or three. 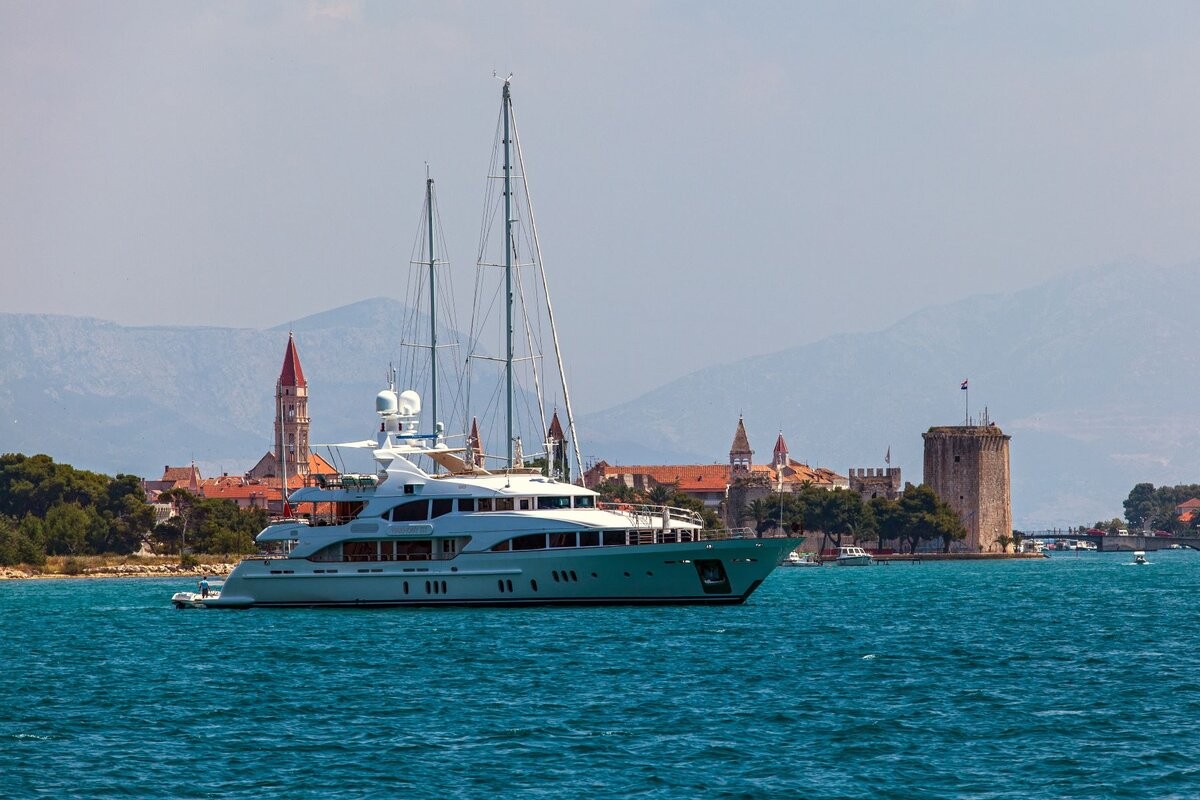 You may be surprised that this museum town abounds in beaches, but that’s mostly because its coastal outskirts offer plenty of options for beachgoers.

Did you know that Trogir is connected to the island of Čiovo by a bridge, giving you access to several beaches, from family-friendly tourist resorts to more secluded local hideaways? Just 3 kilometers from the old town is Okrug Gornji, the most popular beach on the Trogir Riviera, with loads of cafe bars and watersports for the entire family to enjoy.

For those looking for something a bit more secluded, the Slatine area on the eastern corner of Čiovo boasts Kava beach, enveloped by pine trees and unspoiled nature. At the same time, the peaceful Duga Bay sits between Okrug Gornji and Okrug Donj with popular eatery Django and a view of Fumija island.

And if you want something totally in nature and without any facilities? Head to Čiovo’s south side until you find the pebbled Mavarštica, often called ‘White Beach.’ With views onto several Dalmatian islands and islets, Mavarštica is cloaked in pine trees and enhanced by the crystalline Adriatic for an absolute blissful beach day. Just 1 kilometer away is an FKK area, too! 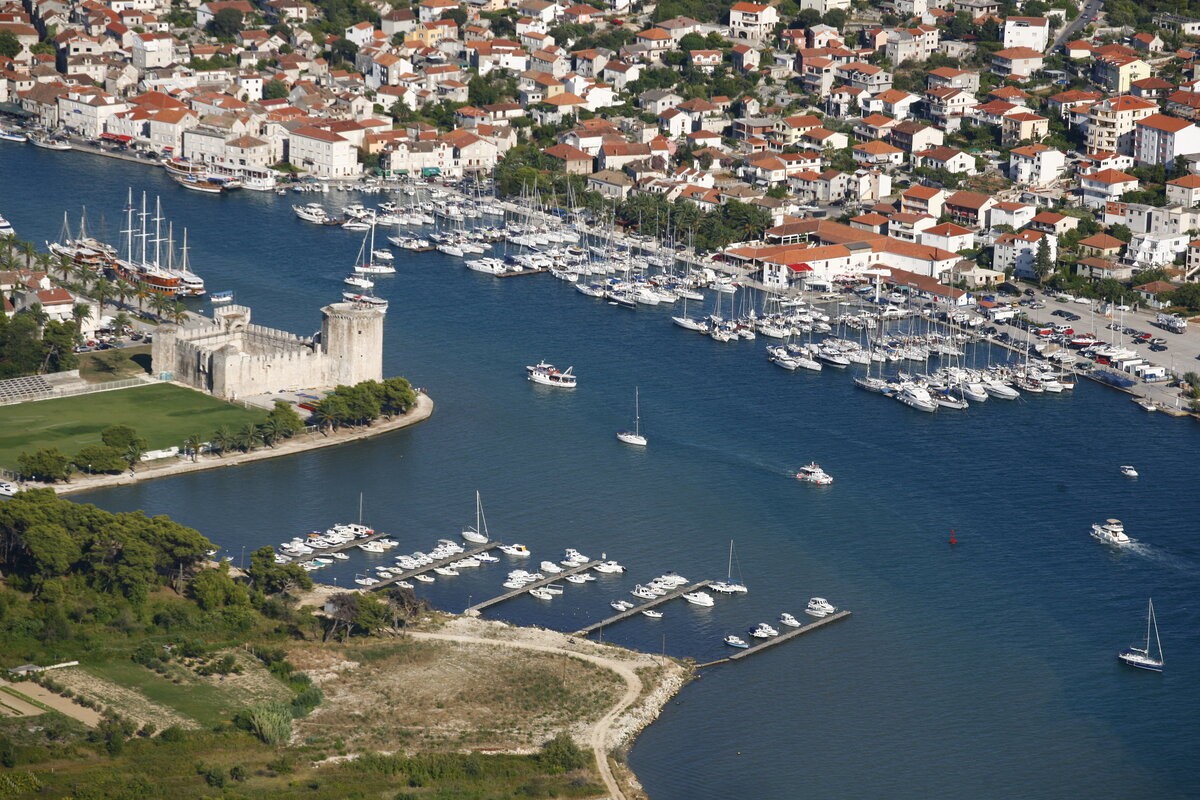 Explore the core: Once you’re in the historic center of Trogir, it’s hard to miss the St. Lawrence Cathedral. This Romanesque-Gothic cathedral took over four centuries to build (beginning in 1213) and boasts Radovan’s portal, one of the most important monuments of this art period created by master sculptor Radovan. You can also find the Chapel and Baptistry of St John in this cathedral, built in 1468, and don’t forget to walk to the top of the belltower! Just outside of the Cathedral, you can’t miss the 14th-century City Loggia, a Renaissance square with St. John and St. Lawrence reliefs, and some of the most famous works by Croatian sculpturist Ivan Meštrović. Ćipiko palace is also found across from the Cathedral, a Venetian-Gothic-Renaissance palace that was once home to Trogir’s nobles!

Coffee and people-watching on the promenade: Trogir’s waterfront promenade, locally known as the Riva, is arguably the best activity. Whether you post at a cafe for coffee or cocktails or sit back and indulge in dinner, this bustling waterfront becomes a spectacle for locals and tourists as mega yachts sail in, and artists light up the already electric atmosphere.

See a concert at Kamerlengo: This 15th-century fortress is more than a historical attraction. Kamerlengo sits at the end of the Riva and welcomes tourists to its top to find spectacular views of the waterfront and old town, but what makes Kamerlengo shine is summer events. Don’t miss out on catching a concert inside this castle, from opera to rock’n’roll!

Shop the markets: If you want the best insight into Trogir’s local life, there is no better way than to visit its markets. Located just outside the busy town center, Trogir’s green and fish markets come alive with animated sellers convincing you that their product is the best. From the freshest fish and vegetables picked that morning to cured meats and cheeses, homemade olive oil, and honey, there is nothing you can’t find at Trogir’s markets - and if you're into bargaining, you’re in luck!

Stroll the alleyways: Trogir is a town marked by masters, which today can be found inside galleries, shops, and ateliers. Gena, for example, crafts 19th-century suits worn by Bernie Ecclestone, while Mišel has been making red coral jewelry for over 100 years. Open Atelier Uremović is home to the work of Trogir’s most famous painter Željko, while Trogir’s signature sweet, rafioli, can be found in most of the gelaterias and bakeries! Trogir’s center may be small compared to other Croatian coastal towns, but it packs a punch with what it has to offer. Don’t be afraid to dig in.

Makarska - 'One of the Adriatic's Most Alluring Locations'