Meet Croatia’s second-largest city, the capital of Dalmatia, and the former retirement home of Emperor Diocletian. Does it get much better than that?

Located on the eastern shore of the Adriatic Sea, Split extends on a peninsula and is marked by Marjan hill, the remains of Diocletian’s Palace, the bell tower of Saint Domnius Cathedral, and a vibrant waterfront promenade where Mediterranean vibes thrive.

Today the main hub to the central Dalmatian islands and Croatian coastal towns, Split quickly rose to fame as one of Croatia’s most popular tourist destinations. And it’s not hard to see why. 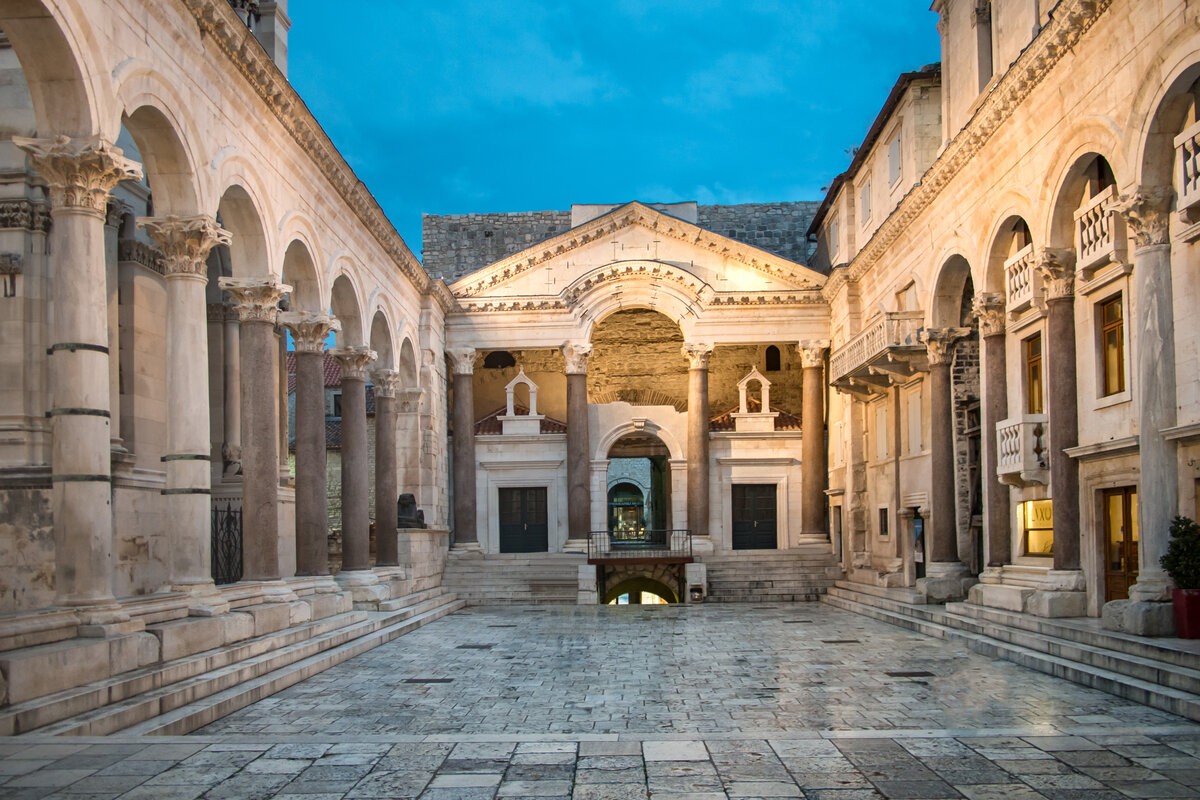 While you may think Split’s decorated history started with the Romans, it was founded as the Greek colony of Aspálathos in the 3rd or 2nd century BC (no one is 100% sure). Roman Emperor Diocletian, however, is Split’s most famous citizen and was responsible for putting the city on the map.

Namely, Roman Emperor Diocletian built his palace, or retirement home, in Split in AD 305. Some say it’s because the area was a good source of sulfur, and he was looking to cure his rheumatism. Whatever the reason, Split thus became a prominent settlement and even succeeded Salona, the then capital of the Roman province of Dalmatia. Roman refugees settled in the famous palace after the Avars and Slavs destroyed Salona in the 7th century.

Split then became an integral part of the Byzantine Empire, with a changing political autonomy, and later part of the Republic of Venice and the Kingdom of Croatia. From 1420, the Venetian Republic took over the city and ruled until 1797. During this time, Split developed into an important port with essential trade routes with the Ottoman territory inland. Split also became the center of Croatian literature, and many palaces were built during this period.

Once Venice fell to Napoleon, the city was ruled by the Habsburg Monarchy, the Napoleonic Kingdom of Italy, and was part of the French Empire in 1809. The Austrian Empire was in power until 1918, when Yugoslavia was formed.

Following the invasion of Yugoslavia by Nazi Germany in April 1941, Split was occupied by Italy, liberated by the Partisans, and then re-occupied by Germany. After World War II, Split became part of post-war Socialist Yugoslavia with the rest of Croatia until the country gained independence in 1991. 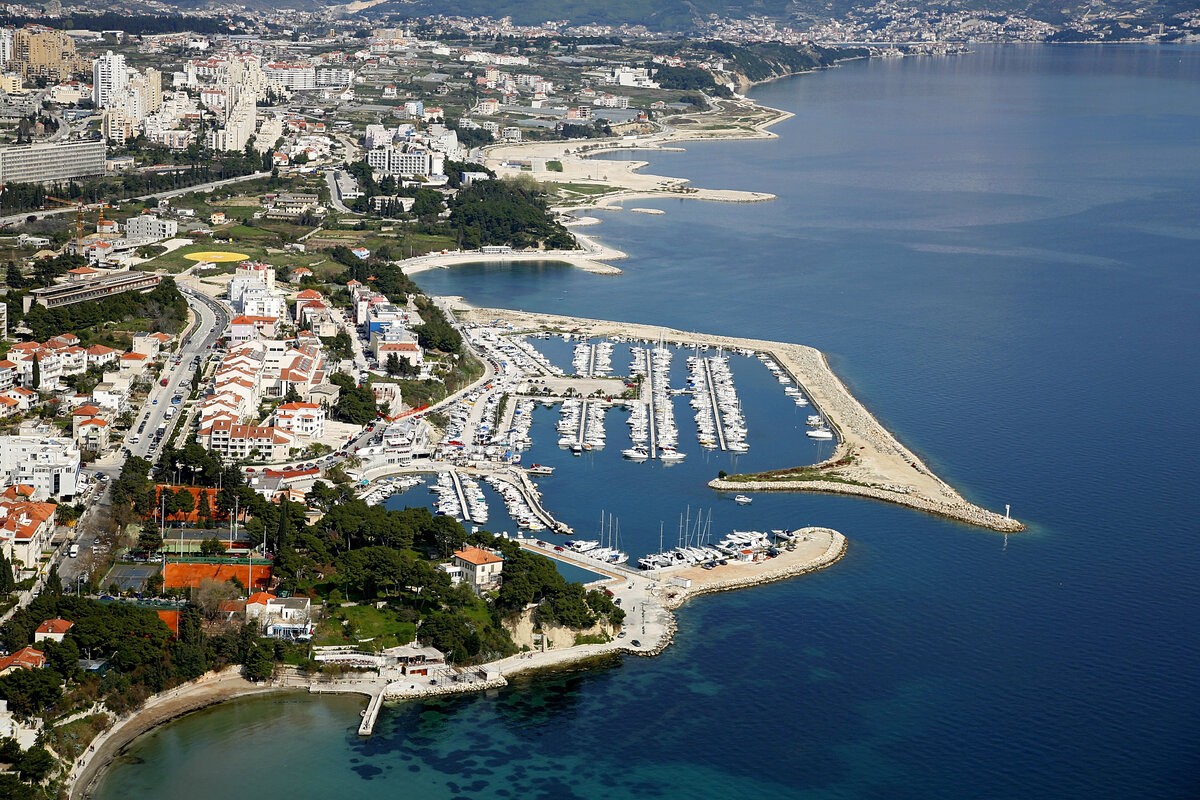 It’s pretty easy to know where to dock in Split, as the centrally-located ACI marina Split boasts 318 berths for boaters. Protected from southerly winds and choppy seas, this ACI marina looks onto Split’s historic center, its famous waterfront promenade, and, of course, Diocletian’s Palace. ACI marina Split was awarded the “Tourist Flower – Quality for Croatia” in 2017 for one of the best medium marinas on the Adriatic and also proudly carries the prestigious Blue Flag Award. Let’s not forget that it is also the starting point for the Split Lungomare, the longest promenade in the Adriatic!

But this isn’t the only marina option in Split. There is also the enormous marina Spinut with 780 berths, while the stunning Le Meridien Lav marina offers 74 sea berths for vessels up to 40m. The hotel also has berths on its outer shore in the summer, serving as a super transit berth for mega-yachts. 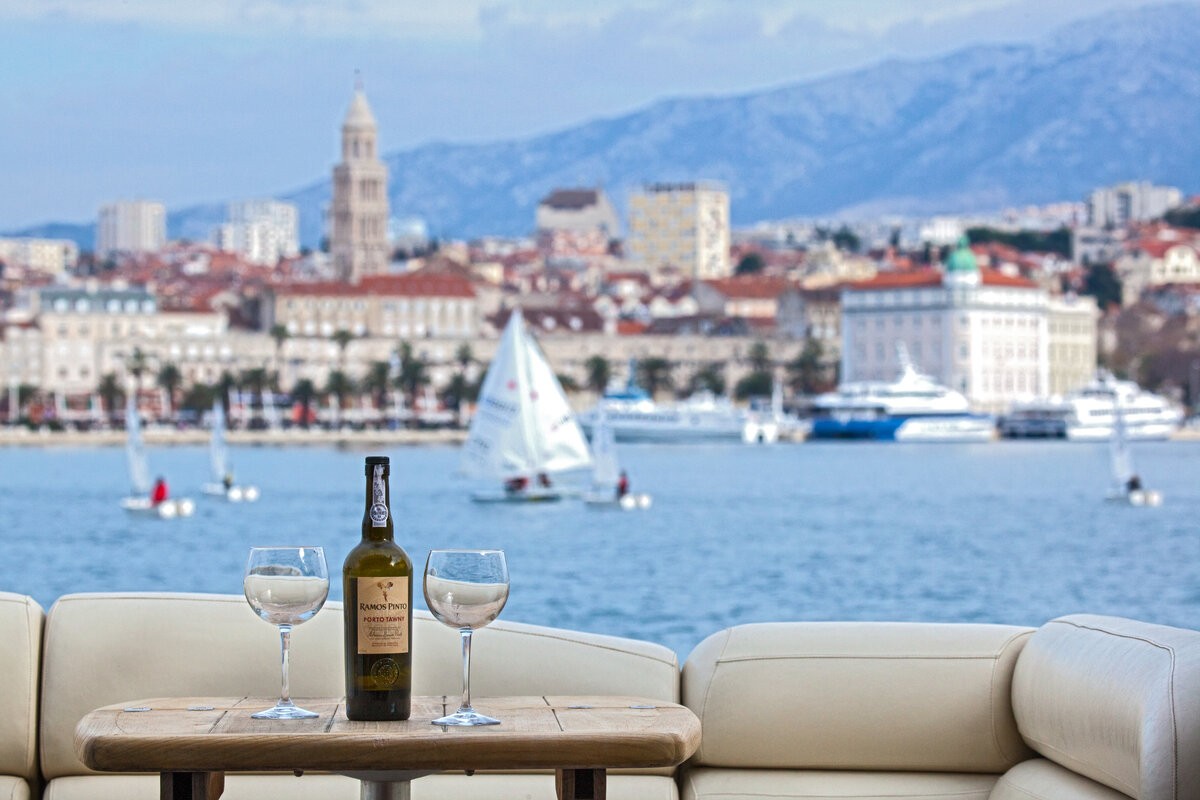 Thousands of restaurants can be found in Split, which isn’t surprising considering there are 250,000 inhabitants to feed. However, most of the city’s famous restaurants are found in its historic core.

Dalmatians aren’t necessarily known for being breakfast people, but that doesn’t mean the meal can’t exist. Being the tourist center of the region, Split locals have gotten clever to feed the hungry morning souls used to their western breakfast trends. Brasserie on 7, for example, is a Riva hotspot that takes the best of Aussie breakfast and local ingredients to offer eggs benedict, French toast, and healthy granola and smoothie bowls. On the other hand, Fig brings southern California breakfast burritos to Split and the ever-famous poached eggs and avocado toast or shakshuka. And if you’re looking for something quick, did you know that there is even a New York bagel spot?

Or lunch and dinner?

Split has it all when it comes to dining options, from casual locales to fancier eateries with several international flavors on offer, too!

If you’re looking to taste homestyle Dalmatian fare in family-run institutions, head to the hand-written menus of Villa Spiza or Varoš favorite Otprilike Ovako. And for an authentic konoba (tavern) with traditional specialties? Konoba Hvaranin, Fetivi, or Nevera.

To explore Split’s modern take on Dalmatian cuisine, dig into the rooftop terrace of Artičok, embrace the culinary prowess of one of Croatia’s best chefs at Dvor, and soak up the sauces at Šug, or enjoy the wine cellar experience of Matoni! If you want to try the best cuts of meat in Split, Chops Grill and Maestro Grill are your go-to's, while the flavors of Asia run rampant at Silk, Adriatic Sushi, and Mini Bota.

And if you just want something you know well, Napoletana-style pizza pies are currently king in Split, with Bokamorra and Basta being loved by tourists, while locals suggest you visit Split’s oldest pizzeria - Galija!

And these hardly scratch the surface.

But where to wine?

Split, as expected, is not just about its restaurants - its bars sometimes take more of the credit! If you’re looking for the best wine and dine spots, head to the most popular Bokeria or Zinfandel Food & Wine Bar. Craft cocktails are done best at Sistema, Noor, or The Daltonist, while you can’t go wrong sipping a drink at any of the cafe bars on the Riva.

Who says a city can’t have spectacular beaches? Split is living proof!

Split is adorned with standout swimming spots thanks to the Marjan peninsula, and Kašjuni is one of Split’s best. Located on the southern side of Marjan Forest Park, Kašjuni is a picturesque pebble beach protected from the wind, which transports beach-goers into a summer oasis with food & drink, beach chairs, umbrellas, and DJs on deck!

Located about 100 meters below the Ivan Meštrović Gallery is Ježinac, another Marian peninsula gem. The sea is clean and calm, protected by concrete breakwaters and medium-size pebbles, while a small cafe offers locals and tourists a place to recharge.

And if you’re making your way back into the Split center, don’t miss a stop at Zvončac, an almost-secret cove situated below a concrete plateau with easy access to the sea thanks to a ladder.

Located on the opposite side of Split is a strip of popular beaches, from the famous sandy city beach Bačvice to local hotspots Ovčice & Firule, the manicured shores and cozy cabanas of Radisson Blu’s beach in Trstenik, and the family-favorite Žnjan, all offering amenities for swimmers and sun-seekers alike. 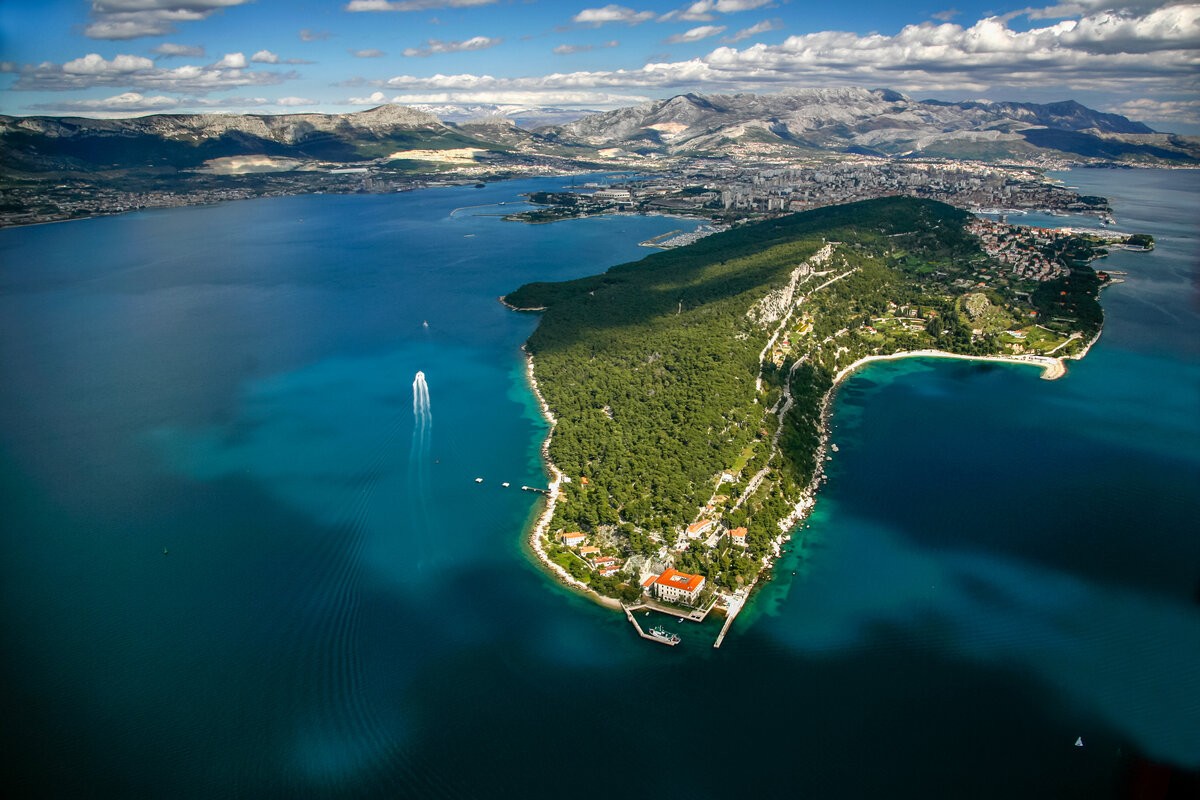 Diocletian's Palace: A no-brainer, we know, but it would be foolish not to explore one of Europe’s best-preserved remains - Diocletian’s Palace. Part of the historical core of Split, which was included on UNESCO'S World Heritage list in 1979, the Palace boasts numerous attractions, from the substructures to the Golden, Silver, Iron, and Brass gates, the old palace entrance at the circular Vestibule, or the former central square of the Palace - Peristyle. You also can’t miss the Temple of Jupiter, which Scottish architect Robert Adam called one of the most beautiful European monuments, or the 3500-year-old well-preserved sphinx on Peristyle!

Marjan Hill: Known as the ‘green lungs of Split,’ Marjan Forest Park is a nature reserve that tops the city's western side with stairs leading up from the historic Varoš neighborhood. An excellent way to stretch your legs for a day, the 123-meter high Marjan allows you to escape from the city bustle into nature. Stop and have a coffee with a side Split’s best view from Cafe Bar Vidilica, or visit the Jewish Cemetery, zoo, or centuries-old churches scattered around the grounds.

Galleries: Split already feels like a museum town thanks to its ancient architecture, but there are many museums and galleries you can visit, too. Meštrović Gallery is located on Split’s West coast on the Marjan peninsula, housing the works of Croatia’s most famous sculptor Ivan Meštrović. The stunning grounds were actually the sculptor’s residence in the 1930s! Get a feel for the history of Split at the Split City Museum, founded in 1946 in a Gothic palace once owned by the Papalic family, and delve into Split’s heritage at the Ethnographic museum, housed in what was once the emperor's bed chambers!

Local life at markets: If you want to live like a local, there is no better way than visiting its two busiest central markets - the Green Market (or ‘pazar) and the Fish Market (or ‘peškarija). Both bustling bazaars are adorned with locals promoting their craft, from agriculture to fishing, wine production, and homemade products. Take an early morning to dig into the finest crops of Dalmatia and negotiate with a seller or two over fresh fish or the best tomatoes!

Alleyway shopping: Split wouldn’t be the city it is without its maze of central cobblestone alleyways embellished by boutique shops, from art to Croatian clothing and jewelry designers and, of course, local olive oil, lavender, and wine. Take an afternoon of ‘me-time’ to shop around - you’ll notice Split’s main shopping street Marmontova boasts some more prominent designer brands, too!

Coffee on Riva: And finally, the one experience everyone must have in Split is the most simple - coffee on the Riva. Grab a seat at any cafe and park there for a while, watching people stroll down the long waterfront promenade dressed to the nines all of the time. Don't be sorry if you stay for hours - your coffee will likely turn into wine.