Šibenik - a pearl of Dalmatia and Renaissance town set on the Adriatic Coast. It was the first city on the Adriatic founded by Croats and the only Croatian city with two monuments registered on the UNESCO list of protected cultural heritage. And it is a dream for travelers who want to explore a mix of Mediterranean nature, history, and nautical tourism. It boasts two national parks nearby, over 2,450 kilometers of groomed trails in the area where you can enjoy its historic fortress around the Krka River, archaeological sites, prehistoric remains, and the outstanding 15th-century St. James Cathedral. This ancient city is one of the most beautiful cities in the Mediterranean, and we’re here to tell you why. 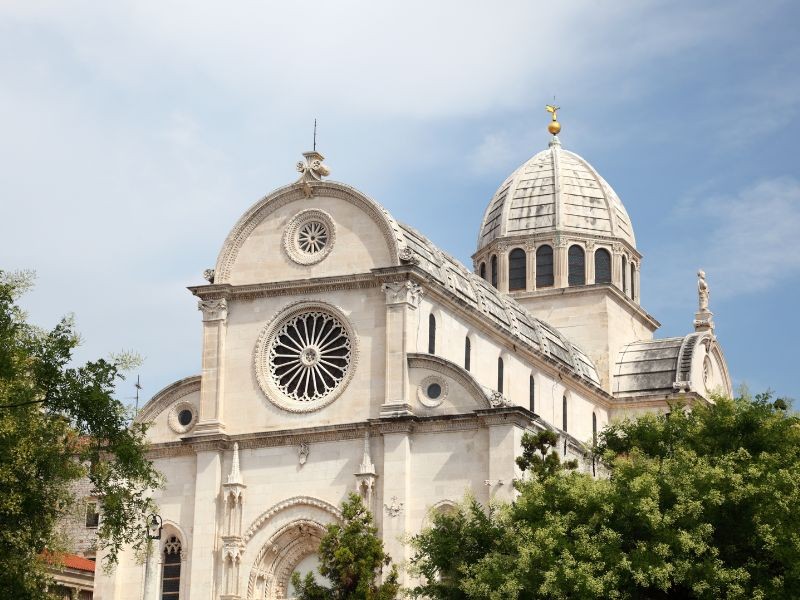 The ancient city of Krešimir, known today as Šibenik, has always worshiped the heavenly archangel St. Michael. The town's patron saint is a symbol of strength and victory, depicted in the city’s coat of arms. But how did we get here?

Šibenik was founded under St. Michael’s fortress, which still dominates the city today. The town was mentioned for the first time in 1066 in a document penned by the most important ruler of the Croatian state - King Petar Krešimir IV. Šibenik finally received the status of a city in 1290 when the diocese of Šibenik was established.

After Croatian and Croatian-Hungarian rulers, the 15th century launched almost 400 years of Venetian rule in the city, and Šibenik’s most significant cultural and historical monument - the famous St. James Cathedral, was built in the 15th and 16th centuries.

During that time, Šibenik was one of the most important Croatian humanistic and Renaissance centers, with many writers, musicians, historians, painters, inventors, and sculptors living in the town. The most famous was scientist and visionary, lexicographer and storyteller, philosopher and theologian Faust Vrančić, the most significant Croatian Renaissance personality. Vrančić not only wrote the first Croatian dictionary, but he authored the famous book of projects and inventions, Machinae novae (New machines). Among his many ideas is the homo volans (flying man) drawing, the first printed depiction of a parachute flight in history. Today, the traditional International Children's Festival Šibenik bears witness to the lively and contemporary cultural creativity of Šibenik.

And that hardly scratches the surface of what you can explore here. 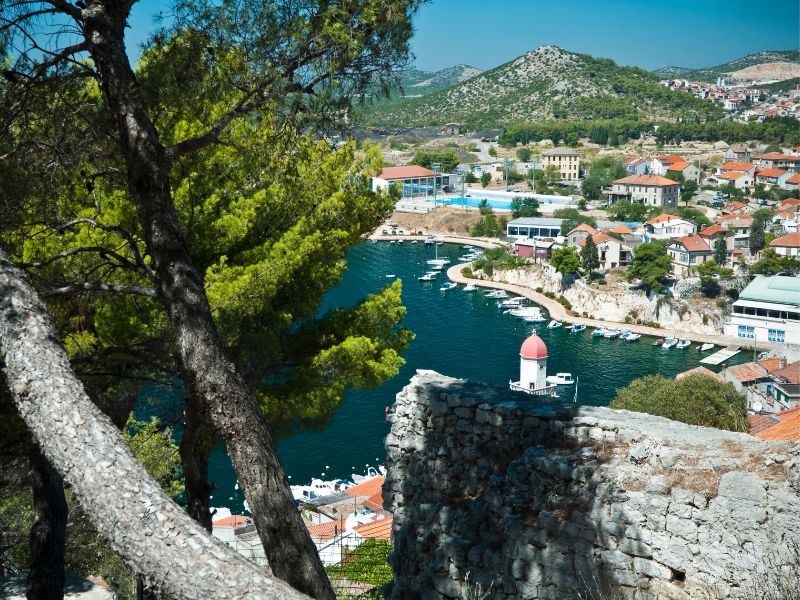 The breathtaking Šibenik archipelago boasts 242 islands, islets, rocks, and reefs with around ten island settlements. The most famous among them are certainly Zlarin, Krapanj, and Prvić, the latter of which was once a popular destination for many Šibenik nobles.

A boater’s dream, which Šibenik marinas are best?

Mandalina Marina is Croatia's only marina designed for superyachts. It’s also the only marina recognized by The Yacht Harbor Association of London (TYHA). A product of D-Marin, this marina is also one of the safest berthing places in the Adriatic. With room for 440 yachts from 10m to 70m, it is also catamaran-friendly and features several restaurants, bars, cafes, shops, a wellness & spa center, and two outdoor pools!

With 248 berths that can welcome 15m to 16 m boats, Amadria Yacht Marines is part of the Amadria Park resort, located in the bay right next to the Amadria Park Šibenik Camping and Villas Kornati. The resort offers many hotels, restaurants, shops, and entertainment for guests, while a small island in the middle of the marina includes the Captain’s Club coffee bar where you can freshen up! 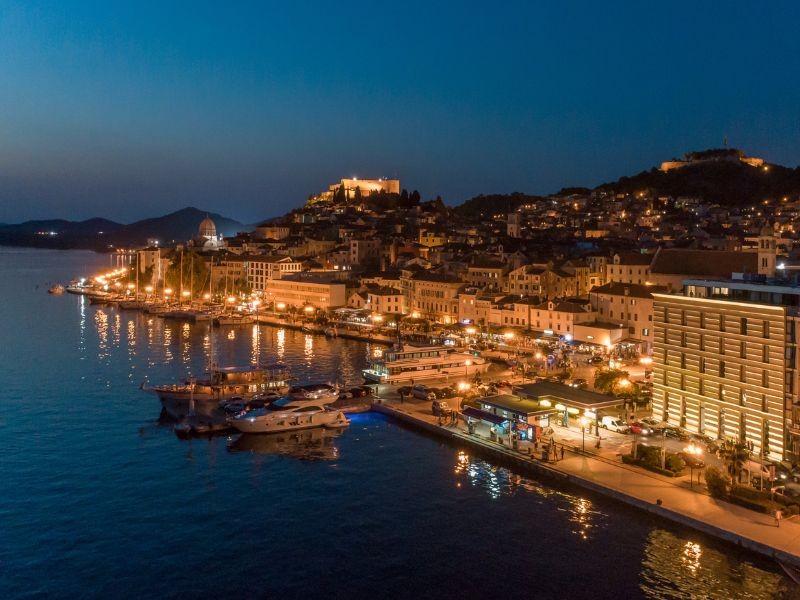 And when you’re ready for dessert? YUM Pastry Shop can’t be missed, known for desserts shaped into the Šibenik Cathedral, pineapples, tea cups, and more!

Those looking to kick back with a cocktail should visit Azimut on the waterfront promenade next to the Šibenik wells, built in 1453. The wells then contained 5 million liters of water and meant life to medieval Šibenik! The space today pairs its cocktails featuring exhibits of contemporary artists, art installations, and live music. 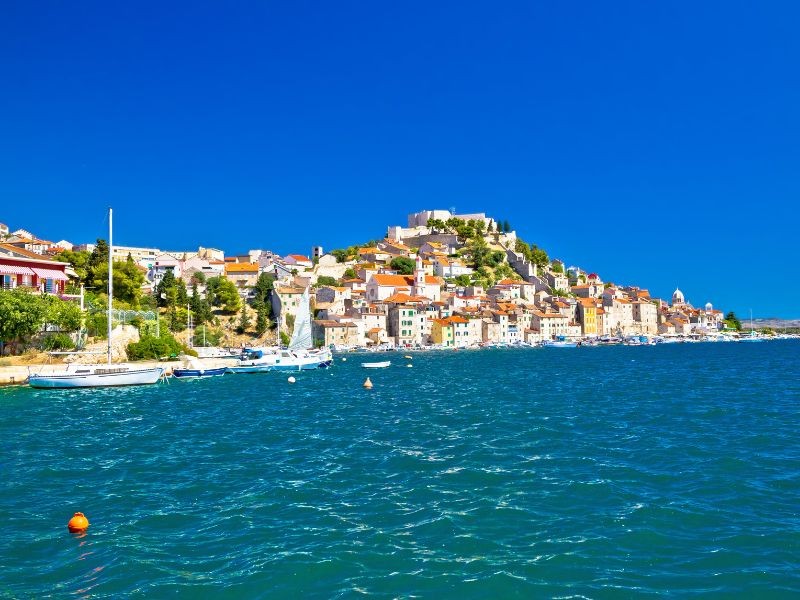 The most popular Šibenik beach is Banj, just ten minutes from the St. James Cathedral and old town with stunning city views. There is plenty of entertainment for beachgoers, including cafe bars, restaurants, and content for children. White Beach is also one of Šibenik’s most beautiful beaches, part of the Amadria Park resort. Set on a mix of pebbles and sand, beachgoers can sit back in sun loungers and enjoy plenty of cafe and restaurant options. And for a more local feel? Jadrija beach is just a few kilometers from the old town, located on St. Anthony’s. It’s also known as one of the oldest bathing areas in Šibenik.

But what if you’re looking for something off the beaten path? Then, head to the island of Murter, specifically Kosirina, where a dream for divers awaits. 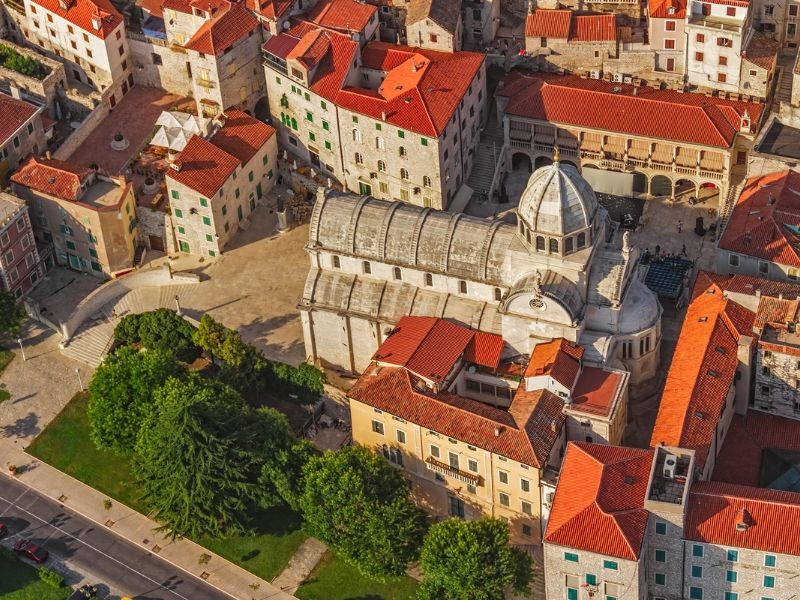 The quaint Šibenik old town is a stone sanctuary of narrow alleyways, boutique shops, cafes, art galleries, and museums. The town’s Republic Square and City Loggia (built from 1533 to 1542) sit next to the Šibenik Cathedral and are a foolproof stop for a coffee and people-watching!

In the heart of Šibenik sits its elegant stone symbol - the UNESCO-protected St. James Cathedral. A unique monument of European sacred architecture built in the 15th and 16th centuries, the cathedral’s construction took more than a hundred years, beginning in a Gothic style and ending in Renaissance style. It is the only cathedral in Europe built exclusively of stone without binding material and is the only cathedral whose exterior appearance fully matches the shape of the interior spaces. It is an absolute must-see when visiting the historic town.

But that isn’t the only church in Šibenink - did you know there are 24 churches in the city? St. Krševan boasts the oldest bell in Croatia (13th century) though you can’t miss St. Francis and the Croatian National Shrine of St. Nikola Tavilić, the first Croatian saint and patron of the Croatian people. St. Lawrence and its monastery and medieval gardens should also be high on your list.

The medieval St. Michael’s fortress was built from the late 8th to the early 9th century on a sixty-meter-high, steep stone hill that dominates the surrounding area. This fortress is important because the city of Šibenik developed under its walls. Today, it is a permanent open-air stage boasting over 1000 seats with many concerts throughout the year.

Barone fortress was built on a hill above the city by Baron Degenfeld, who commanded the defense against the Ottomans. The fortress was built in less than two months in the shape of an irregular star. Today, the fortress offers one of the best views in town as well as an augmented reality experience where one of the most decisive moments in Šibenik’s history has been modernly brought to life.

St. Nicholas Fortress is located at the entrance to St. Anthony’s Channel and has been on the UNESCO list since 2017 as a protected world heritage site. The fortress was built in the 16th century and led by military engineers Michele and Giangirolamo Sanmicheli. The fortress was built on the site of the former St. Nicholas monastery. This fortress never fully fulfilled its function as it was never active in combat or defense, though while it was being built, Šibenik was one of the most important cities on the eastern Adriatic Coast.

St. John’s Fortress was built in 1646, about 120 meters above Šibenik’s old town. This fortress was also quickly constructed (in just 58 days) as a new defense system before the great Ottoman attack.

The St. Nicholas Fortress takes you on a promenade through St. Anthony’s Channel, which connects Panikovac bay and this famous fortress. Shaded by pine trees and oak forests, the promenade is about 4.5 kilometers long and is a great way to stretch your sea legs.

Near Šibenik are two national parks and one nature park, making this town a paradise for nature lovers.

Krka National Park spans 109 km² along the Krka River, with vibrant cultural and historical heritage. Kornati National Park is located in the Kornati archipelago, where 152 islands and islets make up one of the most indented coastlines. Thanks to their incredible geomorphology and rich marine ecosystem, a group of 89 islands has been declared part of the national park. And let’s not forget Vransko jezero Nature Park, the largest natural lake in Croatia and a unique ornithological reserve with 256 bird species.

The perfect place to start or end your Kornati archipelago sailing trip, Šibenik has it all at its fingertips.

What to Pack for a Low-Season Sailing Charter in Croatia?