A rocky stone oasis that imitates the look of the moon, this island is also famous outside of its appearance. Where internationally-awarded cheese, world-famous music festivals, salt production, and tourism mix on the ‘moonscape’ - meet Pag.

Is there life on Mars? Well, we’re still trying to figure that out - but one Croatian island comes pretty close to imitating space. Meet Pag, the fifth-largest island in Croatia. Stretching nearly 60 kilometers long, Pag is bare-boned, unlike the densely forested pines that traditionally decorate most Dalmatian islands. 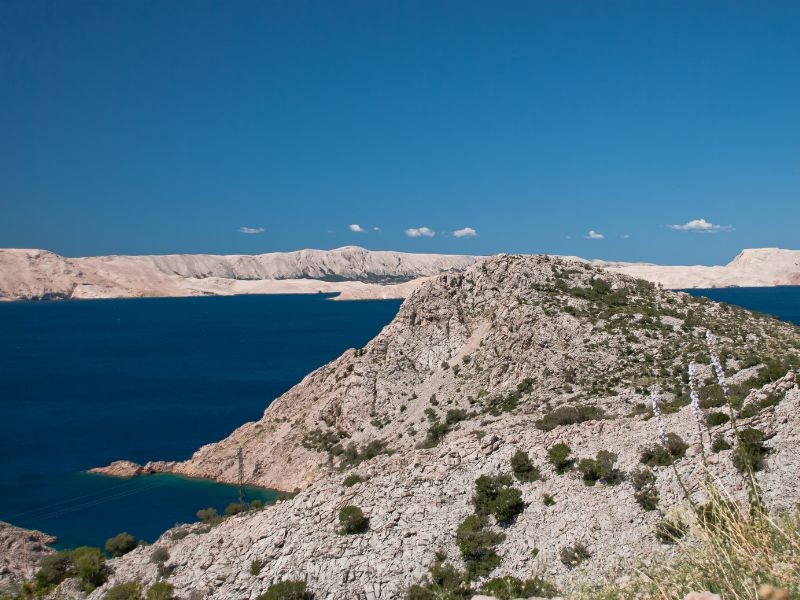 The island of Pag was already inhabited in the New Stone Age, but the first known inhabitants were part of the Liburnian Illyrian tribe. Liburnian remains in the form of necropolises and fortified settlements are still found on the island today.

The Romans penetrated the island and conquered the Liburnians in the first century BC. Numerous traces remain on the island from that period, too, among which the most famous is the aqueduct, whose well-preserved underground parts are in Novalja. In addition, a document with the first written mention of the island further proves the Roman conquests.

In the 7th century, Croats settled on the island, and Pag became part of the Croatian state in the 9th century. The first villages established were Dinjiška, Stara Vasa, and Vlašići. Croatian-Hungarian, Venetian, Austrian and French rule alternated in the following centuries, and the island became an administrative unit during the Habsburg Monarchy.

After phylloxera ravaged vineyards all over Dalmatia, including on Pag, there was a mass emigration of the population, mainly to overseas countries, at the beginning of the 20th century. But Pag island was hardly forgotten.

Pag’s unrivaled beauty was allegedly first discovered by tourists from the Czech Republic and Poland in 1925, and during its first ‘real’ tourism year, Pag recorded 6,580 overnight stays! But tourism flourished on the island with the construction of the Pag Bridge in 1968, connecting the island and the mainland with a clearance navigable by the largest yachts. This bridge also acts as a backdrop for the brutally-strong bura wind, which blows over the Velebit massif on the island’s eastern side. Hitting over 200km/h, this wind is one of the island’s most dangerous attractions, but also responsible for creating its internationally known symbols. We’ll tell you more about that later. 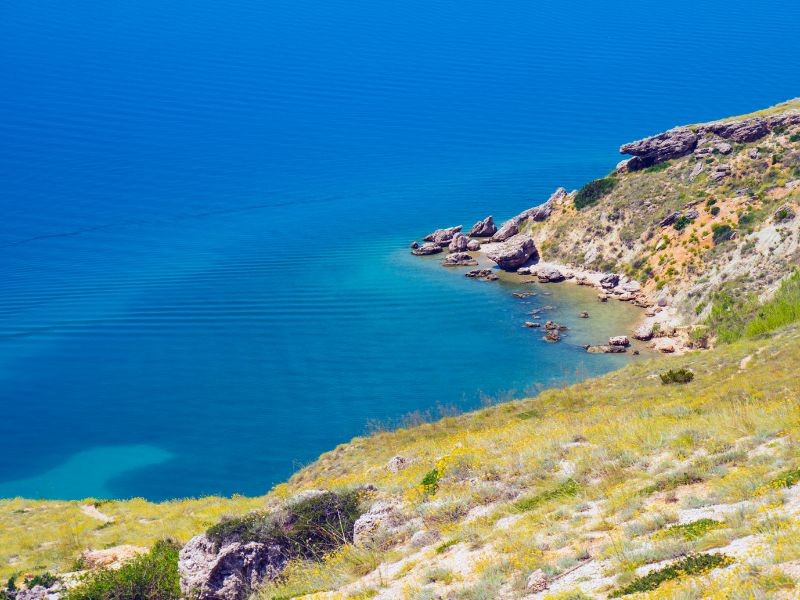 Located to the west of Pag Island in the Maun Channel is ACI Marina Šimuni. Some consider this marina the north entrance to Dalmatia and the last marina in the Kvarner archipelago. Situated in the small fishing village of Šimuni, this ACI marina boasts 191 sea berths. It is open year-round, with amenities ranging from restaurants to grocery stores, toilet and shower facilities, and a nearby fuel station. The Šimuni tourist resort is also fun to explore, with many camps and tourist resorts. And if you’re with the family, there is plenty to do.

But if you’re looking for somewhere to anchor a bit off the beaten path? Don’t miss the quiet and relaxing bays of Proboj and Košljun - a dream for swimmers! 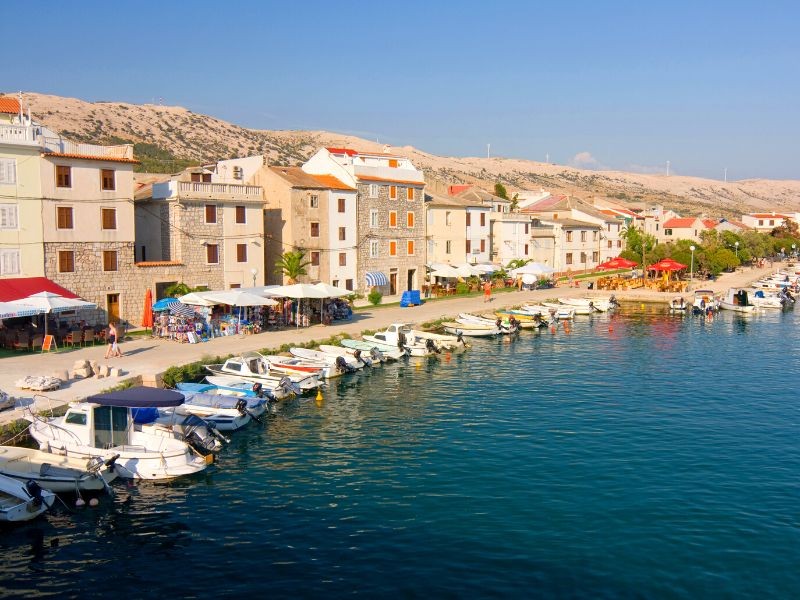 For the finest dining experience on the island, head to the hotel, restaurant, and winery Boškinac, located inland in the town of Novalja. A go-to destination for gourmands, Boškinac runs off carefully selected local seasonal ingredients and creativity, highlighting the flavors and aromas of the island. And did we mention they’ve carried a Michelin star since 2020?

But if you’re looking for something a bit more hearty and homestyle, head to Bodulo, a tavern in the town of Pag, where tradition runs deep. Expect local specialties, pasta, seafood, and generous portions.

And if you just want a snack? There is no better stop than Trapula Wine & Cheese Bar, set in the main square of Pag town. With local cheeses (the highlight of which is the famous Paški sir), wines, olives, and prosciutto, this tapas-style spot is the perfect place to get a taste of the island.

Pro tip: Don’t forget to taste Pag lamb, considered among the finest specialties on the island because of its unique flavor. 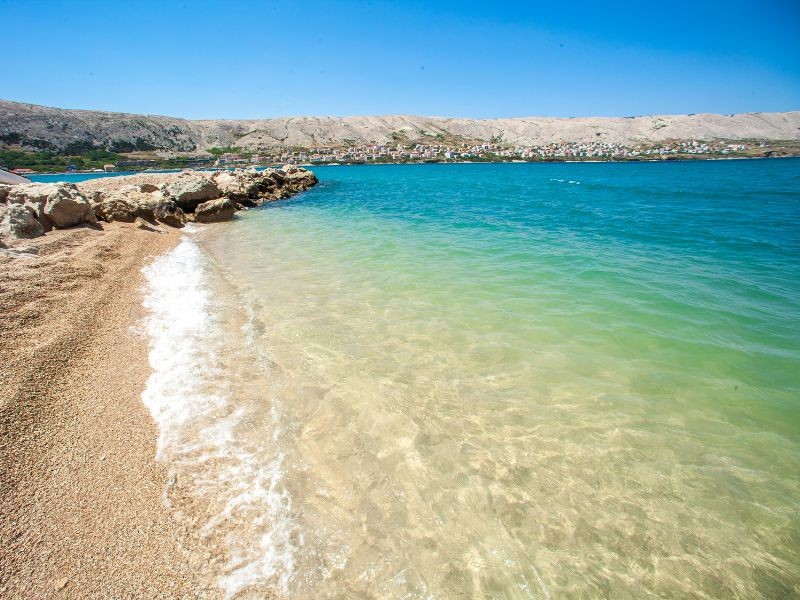 Did you know that the Bay of Pag has 27 km of beaches?

Hands down, the most popular and picturesque beach on Pag island is Ručica, and once you see a photo, you’ll know why. Located in Metajna, this sandy beach blends into its rocky vegetation - and the only negative is that there is no natural shade. If you’re heading here, bring an umbrella and SPF.

Slana Beach is another breathtaker, where the lunar-like surface is especially prominent. Accessible by boat or bike from Metajna, this beach sits near the Pag Gate, which connects Pag Bay with the Velebit Channel. With a view looking north, enveloped by rugged and rocky cliffs and finely pebbled shore, Slana is a showstopper.

Last but not least, you can’t visit Pag without seeing Beritnica, not far from the town of Novalja. One of the most idyllic bays on the island, Beritnica is marked by three large rocks in its shallow sea. But this natural art installation isn’t all that’s worth visiting. Above Beritnica is the famous Stogaj cliff climbing rock, one of the most spectacular stone towers in the Adriatic! 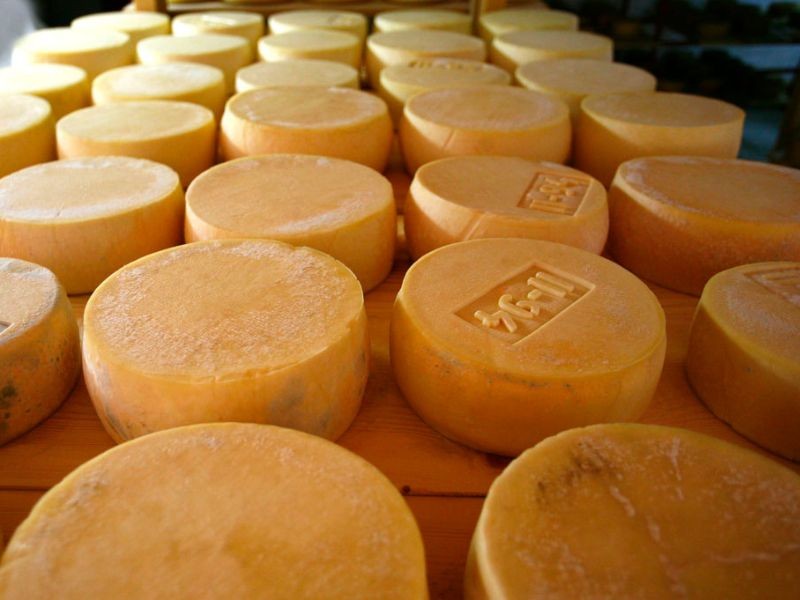 As we mentioned earlier, Pag is quite famous worldwide thanks to a few particular symbols that have given the island international fame. The first of which is most important - its cheese.

Pag cheese, or Paški sir as we call it in Croatia, is the island’s ultimate culinary brand. But this cheese isn’t like any other. It’s unique in that it is made exclusively from the milk of Pag sheep and sea salt that sweeps over from Velebit and onto the island's vegetation. Namely, the native Pag sheep feast on this salted vegetation, producing unique milk that forms into Pag cheese. You’ll find many small family farms around the island selling this delicacy, while one of the more memorable experiences on the island is visiting the multi-awarded Gligora Cheese Factory in the town of Kolan. Not only do you learn about the factory’s story and the ins and outs of Pag cheese, but you get a tour of the production facility and the cheese cellar and the chance to taste and buy these favorite products!

But Pag has a few more celebrities, like its salt production, one of the oldest traditions in the eastern Adriatic. Thanks to its local micro-climate, a high number of annual sunny days, constantly blowing winds, and bare vegetation, Pag sea salt is known for its appearance, granulation, and non-astringent flavor, among other things. And with over a thousand years of practice producing salt on the island, it’s not hard to see why this is one of Pag’s most famous symbols. Pag’s salt pans were first mentioned in the 10th century though the production has been modernized since then, no longer using natural evaporation techniques. Solana Pag is the largest production plant in Croatia, with production spanning around 2 million square meters, featuring pans, clay pools, nine depots, and a plant floor. 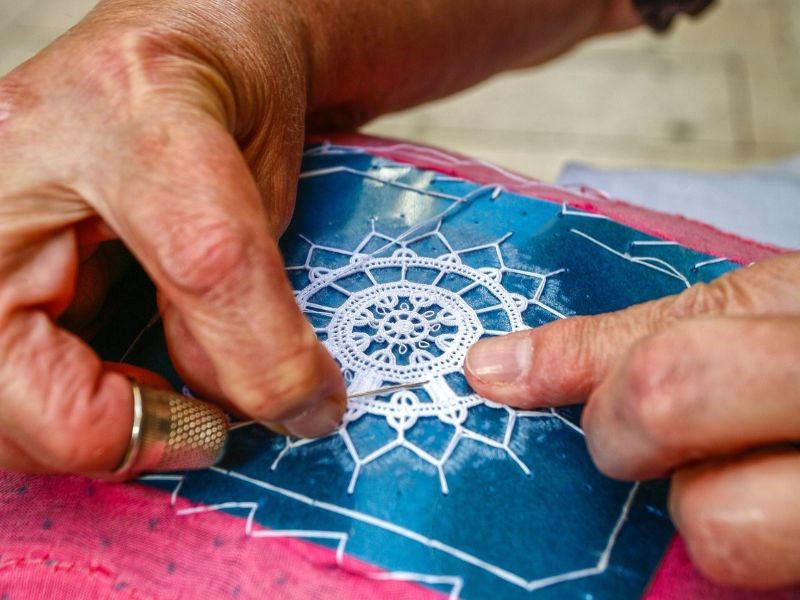 And we can’t forget to mention the history of lace-making on the island, known as ‘white gold.’ A craft that indeed took form in the city of Pag at the end of the 15th century, today, Pag lacemaking is inscribed in the UNESCO Representative List of the Intangible Cultural Heritage of Humanity. An international lace festival is even held in Pag town every June! In addition, visitors to Pag town can visit lace-makers and buy their products around the streets and squares, while the Pag Lace Gallery opened in the Rector's Palace on Petar Krešimir IV Square, right in the heart of town.

But what else shouldn’t you miss?

Pag town is a Renaissance town built in the 15th century with several preserved cultural monuments, restaurants, and cafe bars. Some not-to-miss spots include the Church of the Assumption of the Blessed Virgin Mary (Zborna crkva Marijinog Uznesenja), Knežev dvor, and Skrivanat tower. And if you are into more churches? Check out the Church of St. Francis, the Church of St. George, and the Benedictine monastery of St. Margherita.

Another town worth visiting? Novalja! Most famous today thanks to electronic music festivals that run all summer long, it is a playground for young tourists. Its prized beach is Zrće, often revered as one of Europe’s top party spots, adorned with a strip of nightclubs that run until the early morning hours. But if you’re not here to party? Novalja is a slow-paced island town with many quaint cafes, restaurants, and, of course, churches. Don’t miss the Church of Our Lady of the Rosary or the ‘Little Church’ by the locals. Better yet - just a few kilometers from Novalja is an incredible natural phenomenon - the Pag triangle, a megalithic footprint, discovered in May 1999!

In general, lovers of archaeology, history, and historical phenomena should visit the area of Caska, located on the western part of the bay of Pag and, according to some, the oldest place on the island. Namely, while there are only a few houses in Caska bay today, the sunken Roman city of Cissa city lies on its seabed. Other noteworthy remains are the fort and the Church of St. Jurja, the Church of St. Anthony’s, the stone tower of Tunera, the massive walls on the eastern slopes of the bay, and the impressive underground tunnel Pod bužu. In addition, the Blato swamp in this area is protected for its biological and landscape diversity.

As expected, Pag island is known for water activities, like diving and windsurfing. Visitors can find several diving centers on the island, while windsurfing is best during the maestral wind.

And these aren’t the only things you can do outdoors…

Did you know Pag has 14 bike trails ranging from 2 to 20 kilometers long? All routes run through the island's rocky terrain, stone villages, and larger towns. And one of the best lookouts on your bike ride is Vidikovac!

But Pag also has one of Croatia’s best hiking trails. ‘The Life on Mars trail’ spans 12 kilometers through Metajna, Kruna, Teplice, and Ručica, bringing you the cosmic beauty of Pag’s best beaches.

And finally, if you head to the northernmost point of the island, you’ll meet the town of Lun, a small village about 20 kilometers from Novalja. What this rather unassuming spot is regarded for, however, is quite impressive - thousand-year-old olive groves! You won’t want to miss the chance to taste olive oil here. It’ll be the perfect partner for your Pag cheese!