Two hidden gems for sailors frequenting the Šibenik archipelago are the islands of Zlarin and Prvić. Acting as the perfect day trips no matter where you are on the Šibenik Riviera, be it in Primošten, Tribunj, Vodice, Rogoznica, or the city of Šibenik, Zlarin, and Prvić sit just off the mainland. But what makes these two islands worth visiting, apart from their accessibility? We’re here to entice you. 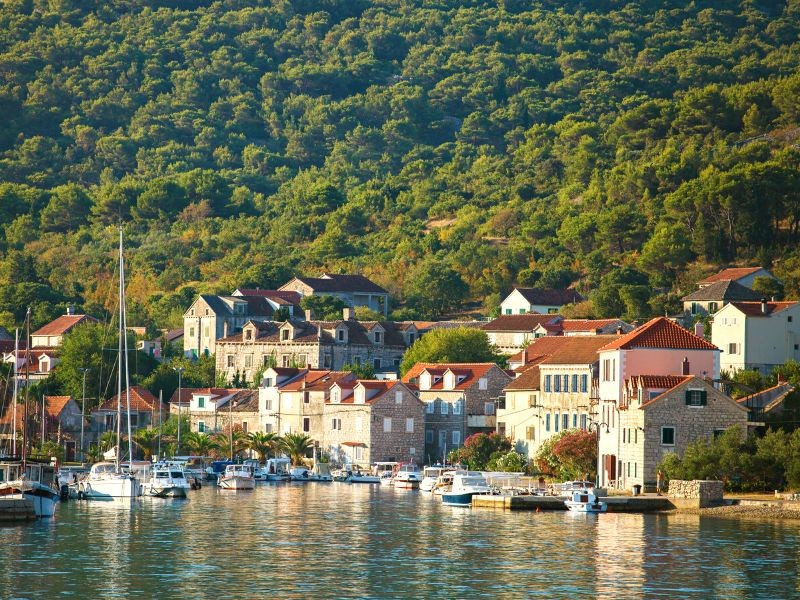 Zlarin lies southwest of Šibenik and covers 8.05 sqm. It is separated from a series of small islands in the southwest by the Zlarin channel and the neighboring mainland by the Šibenik channel. Just 6.1 kilometers long and about 2.1 kilometers wide, Zlarin is built from limestone and dolomites, with its highest peak reaching 170 meters. Its unindented coast boasts the larger bays of Zlarin and Magarna.

The only settlement on the island today is Zlarin, though settlers on the island date back to prehistory. The first mention of Zlarin is recorded at the end of the 13th century. From 1298 to 1843, Zlarin was controlled by the Šibenik diocese and was under the Venetian administration until 1797. At the time of the Ottoman invasions in the wider Šibenik area, Zlarin was inhabited by refugees from the mainland. Coral farming was first mentioned in Zlarin at the beginning of the 15th century, and today, coral is one of the island’s symbols.

Zlarin’s maritime history is also fascinating, primarily due to one ship named ‘Nirvana’. Built at the beginning of the 20th century in Korčula for the Venice Aleksandria regatta, the wine transport ship was owned by Vukov from Zlarin and stationed on the island. Its role changed from a tourist ship for sailing along the Adriatic to starring in films playing a part in the war. It left an indelible mark on Zlarin’s cultural heritage.

Next to Zlarin Island is Prvić, a tiny island with a surface area of only 2.4 sqm. The only settlements on the island are Šepurine and Prvić Luka, which were first mentioned in the 11th century. Prvić is also the only island that has two settlements in such a small area!

Šibenik noble families and church institutions owned Prvić in the Middle Ages. Like Zlarin, it was often a refuge for the people of Šibenik and refugees from the hinterland during the Ottoman invasions. From the 16th century, sponge harvesting, olive growing, and fishing developed there.

Prvić Island is also known as ‘Faust Island’ in honor of its most famous resident Faust Vrančić, or the ‘Croatian Leonardo da Vinci’. Namely, the famous Croatian scientist, inventor, and historian spent his childhood on the island, specifically in Šepurine, where his family home was located. While he died in Venice in 1617, his last wish was to be buried on Prvić Island, which he was, in the Church of Our Lady of Mercy in Prvić Luka. His gravestone inscribes “Faustus Verantius - Ep.us Chanadiensis - Novarum Praedicamentorum Et Novarum - Machinarum Ae Fragmentorum - Historiae Illyricae Ae Sarmatiae - Collector - An. Dom. MDCXVII.”

Prvić began to lose its population in the 20th century as disease killed its crops, forcing residents to emigrate to Australia and America. The two world wars didn’t help, though its declining population certainly played a part in preserving its old-Mediterranean charm. Prvić’s cultural heritage is protected by the Croatian Ministry of Culture. 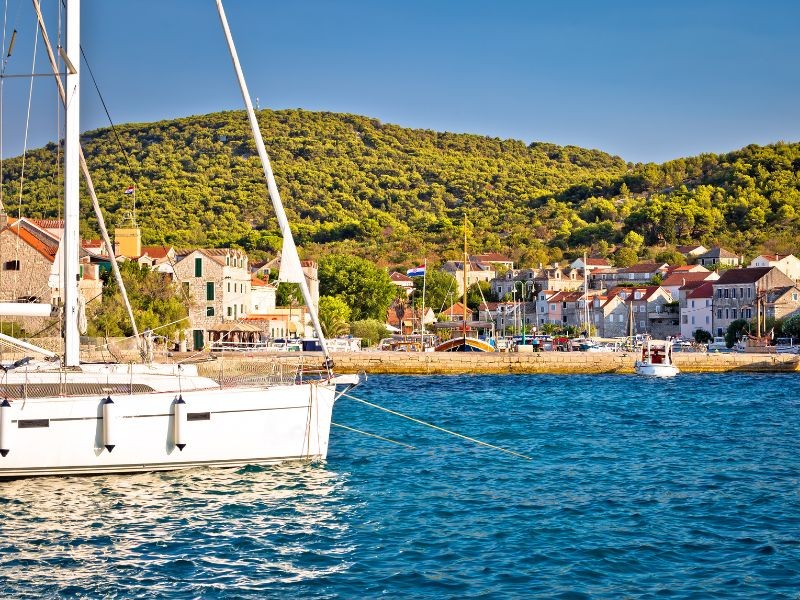 Zlarin is the third-largest island in the Šibenik archipelago and has always been the gatekeeper of the St. Ante Channel and the guardian of Šibenik, sitting less than three miles southwest of the Šibenik port. It’s also only three miles south of Prvić Island. The Zlarin port is on the northwest side of the island and is well protected from all winds except strong westerly and northwesterly winds. With room for around 20 yachts, the Zlarin port has some amenities, like water and electricity, video surveillance, and Wi-Fi, but most facilities are in the town. Visitors can find a few grocery stores, a handful of restaurants, cafes, small markets, and jewelry shops.

There are two small harbors on Prvić Island - in Prvić Luka and Šepurine. Prvić Luka is located on the southeastern end of the island, just opposite the islet of Lupac and Zlarin to the southeast. With room for around 10-12 yachts, this harbor has water and electricity connection points and is well-protected apart from southerly and southeasterly winds. The town offers markets, restaurants, and cafe bars for food and entertainment.

Prvić Luka and Šepurine are connected on land by a one-kilometer-long road. However, there are no cars allowed on the entire island. Šepurine, located on the island's western side, has a small harbor with room for a few yachts and is mainly overtaken by fishing boats. One trick is to dock at Konoba “Bare” so long as the crew has a meal, too. Otherwise, the town has a small market and limited amenities. 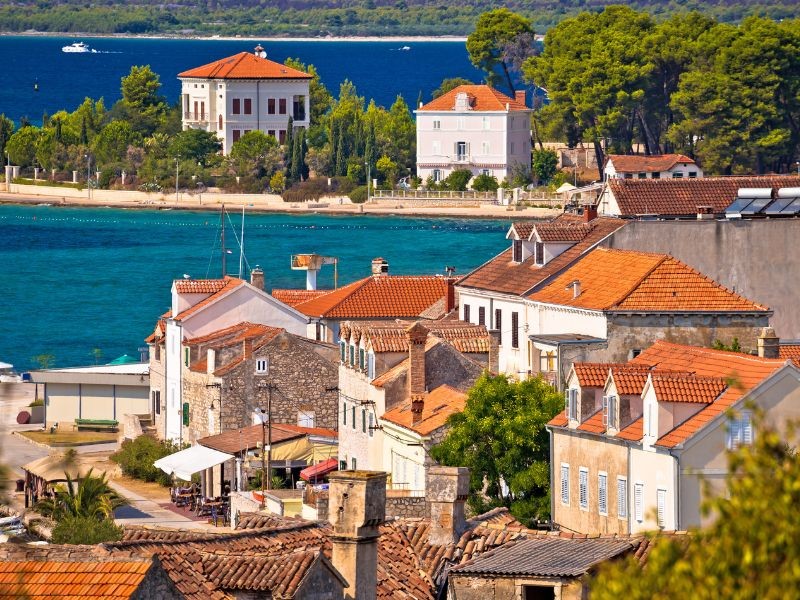 Konoba Prslika is a gem on Zlarin Island that takes pride in super local fare and Dalmatian tradition. Seafood is king here, especially their tuna steak, but the menu abounds in many other local flavors, from homemade cheese and cured meats to pâtés, pasta, and risotto. Did we mention the quaint garden setting?

Another Zlarin go-to is Konoba Aldura, located on the marina promenade with a view of the port. Aldura’s menu is also focused on local specialties and seafood dishes, while its interior is authentically decorated with brick, wood, and stone.

And for a spot right on the sea? Konoba Val takes traditional dishes to the next level with a sea view setting that’s hard to beat. Of course, seafood rules here, too, but if you’re looking for meat delicacies and preferably peka? Head to Stara Makina!

Konoba Bare is most popular in Šepurine. Among their seafood specialties, the bonito fish dish is the most famous, cooked in olive oil, vinegar, parsley, and garlic and served with local wine. And don’t forget, docking here may be an option! 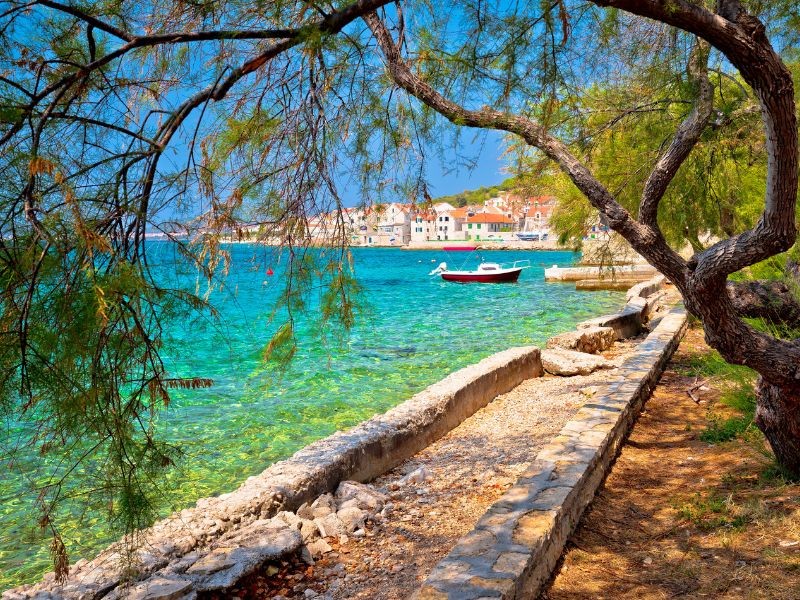 Did you know that Zlarin welcomes 2700 hours of sunshine per year? At that rate, it’s one of Croatia’s sunniest islands. Beachgoers meet Zlarin’s natural and wild world at Malpaga and Vela Oštrica Beach. The most popular beach on Prvić Island is Trstevica, located in the cove of the same name near Šepurine.

And the best anchorage for boaters? Uvala Kobila is just 500 meters south of the Šepurine harbor! 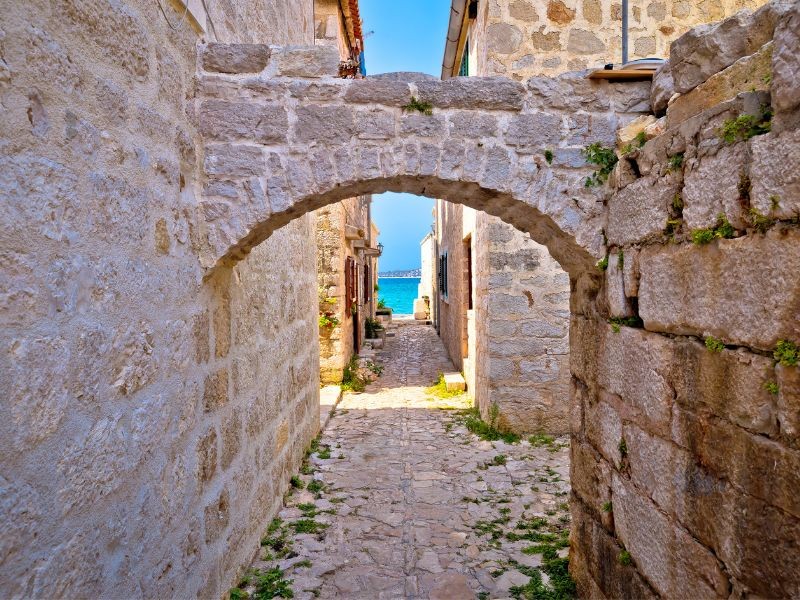 We’ve already mentioned that Zlarin is one of the sunniest islands on the Adriatic coast, which means there are plenty of outdoor activities to enjoy - like hiking to Zlarin’s highest peak Klepac. Standing almost 170 meters tall, hikers are welcomed with views of the Šibenik channel, the Velebit mountain, and the volcanic island of Jabuka. And if you want to stretch your legs without the hike - did you know that Zlarin also has the longest waterfront of all Croatian islands?

Given Zlarin’s coral history, there is a small coral museum in the town where you can join a workshop to learn about corals, their history, diving and farming, and the grinding and processing of corals. Visitors can also check out the Assumption of Mary parish church (circa 1735) with relics of St. Fortunate, protector of the island. And don’t miss Our Lady of Rašelj (circa 1714) and admire the Leroj clock tower, which marks the center of town.

The town of Šepurine on Prvić Island may be off the tourist track, but that doesn’t mean it lacks content. Visitors can explore the small medieval church dedicated to St. Jelena of the Cross and the 19th-century church of the Assumption of the Virgin Mary. The old summer house of Šibenik’s noble family Draganić-Vrančić has also been preserved.

The most interesting attraction on the island is in the town of Prvić Luka - the Faust Vrančić Memorial Center, dedicated to the first Croatian lexicographer and inventor. Opened in 2012, the Memorial Center uncovers the life and work of the famous inventor with educational games for children and models of his designs for suspension bridges and parachutes. Many 18th and 19th-century mansions also decorate Prvić Luka, as well as the 15th-century Our Lady of Mercy parish church.

Hiking, trekking, and cycling are also popular on the island, with trails that pass through olive groves, vineyards, orchards, viewpoints, and the always aromatic Mediterranean vegetation. Charming old stone houses decorate both towns. Given their proximity to one another, it’s easy to explore both!

And if you’re sailing at the end of summer? The Burtiž regatta of old traditional boats is held at the end of August or the beginning of September every year!

What to Pack for a Low-Season Sailing Charter in Croatia?