Only nine nautical miles away from Split, Šolta is the closest island to Diocletian’s kingdom. However, it is a lesser-known tourism destination praised for its royalty of olives, honey, and indigenous wine. Due to its proximity to Split and Trogir, it’s hard to believe that an island as easy-to-reach as Šolta has yet to be trampled by the tracks of tourists - but we’ll gladly keep it that way.

An unparalleled destination for boaters thanks to its vibrant maritime heritage and 24 bays, Šolta is also decorated with charming inland and seaside settlements. The town of Nečujam even inspired the father of Croatian literature, Marko Marulić, who used the island as his peaceful writing sanctuary, while esteemed Croatian poet Petar Hektorović wrote, ‘Fishing and Fishermen’s Talk’ here, too.

From Illyrian legends to medieval poetry, thriving agriculture to heritage hotels that celebrate the spirit of its past, Šolta is one of Dalmatia’s best-kept secrets, and we’re here to tell you why. 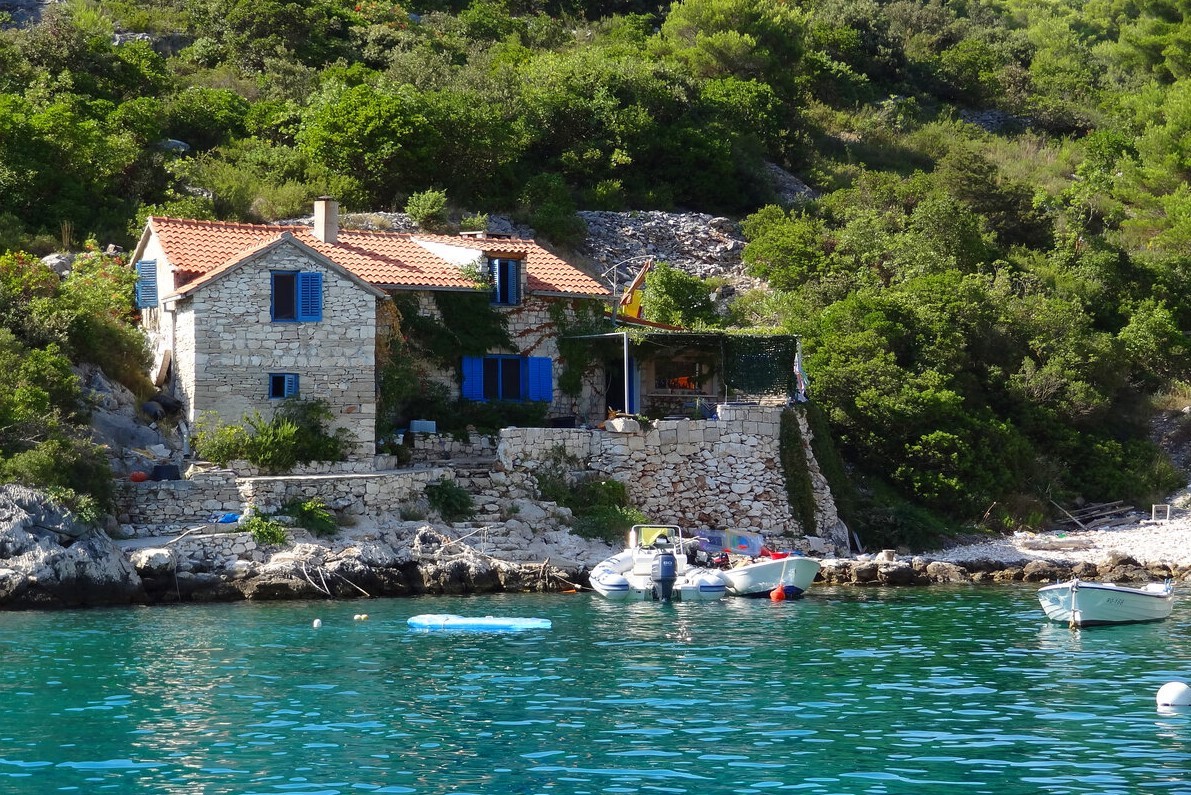 Šolta’s history traces back to Neolithic times. The oldest legends connect to the Delmati Illyrian tribe and Queen Teuta, who built Mir castle above Senjska Bay for one to find peace and inner strength.

The name of the island, however, is related to the Greek word Olyntha, or unripe fig, first recorded by Greek geographer Pseudo-Scylax in the 4th century BC. The Romans called the island ‘Solenta,’ blending salt and sun, which is why Croatian poet Petar Hektorović called Šolta ‘Sulet’ in ‘Fishing and Fishermen’s Talk.’ The name was Romanized with the arrival of the Venetians, and thus ‘Šolta’ was coined. Šolta’s inhabitants have proudly paid tribute to the many origins of its name by carrying on its agricultural traditions.

The Romans left their mark on the island, which can be seen in villa rustica near Donje Selo, Rogač, Gornje Selo, and Nečujam. Because Šolta inhabitants have long embraced Christianity, visitors can also find a basilica and sarcophagus lying next to the Church of St. Stephen in Grohote. Šolta experienced ​​a population boom when the Avars raided Salona, the capital of the Roman province Dalmatia, back in 614 AD. The island experienced several rulers and occupations in the centuries that followed.

In the 14th century, Šolta’s inhabitants primarily worked in agriculture and were merchants or seafarers, with the town of Stomorska breeding generations of skilled seamen and ship owners. Under Venetian rule, the first fortified towers on the island were built in the 15th century, first in Grohote and Gornje Selo, primarily for the battles between the Venetians and Ottomans. ​​

World War II brought more change to the island, as 1800 inhabitants abandoned Šolta for a refugee camp in El Shatt, Egypt. The Municipality of Šolta was ultimately re-established in 1952, with improved living conditions thanks to electricity, schools, roads, and health clinics. In addition, the hugely successful Jugoplastika manufacturing plant on the island employed most of Šolta’s inhabitants. Today, Šolta continues to depend on agriculture, while its inhabitants also dip into the flourishing world of tourism. 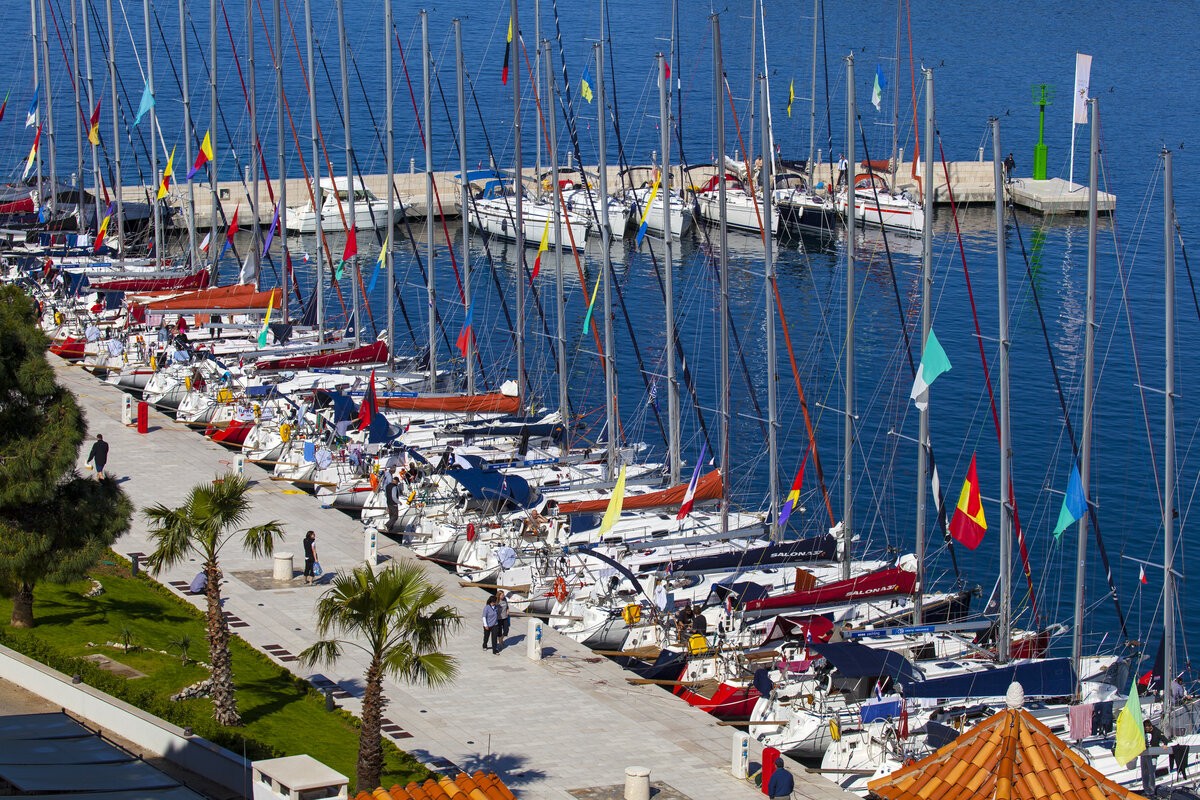 Šolta may not be on everyone’s sailing map - but it should be. And at just nine nautical miles away from Split, it’s a shame not to stop and explore this still somewhat undiscovered gem.

Šolta’s main towns are equipped with marinas, albeit smaller, but they do the trick. The marinas in Rogač, Stomorska, and Nečujam have limited moorings, are well-protected from winds (apart from bura), and boast some restaurants, bars, and shops available in the towns themselves. But as you can imagine, these few spaces quickly fill up in the summer months.

Your most lavish option is mooring at Martinis Marchi in Maslinica. Built in 1703 by the three Marchi brothers as a stronghold against pirate attacks, the former castle has transformed into a heritage hotel with a stunning marina and restaurant. After a state-of-the-art upgrade in 2012, the marina boasts 50 berths for yachts up to 30 meters in the well-protected Maslinica Bay, with room for up to 7 megayachts outside the breakwater. With all of the amenities you’d ever need and a grocery store a few mins away, it’s hard not to choose Martinis Marchi.

And if you opt against a marina? Šolta boasts 24 bays! Not far from Maslinica is one of Šolta’s most popular sailing areas - Šešula Bay. Near Šešula are the charming beach bays of Poganica and Tatinja, while Donja and Gornja Krušica Bays are best if you’re looking for absolute peace. 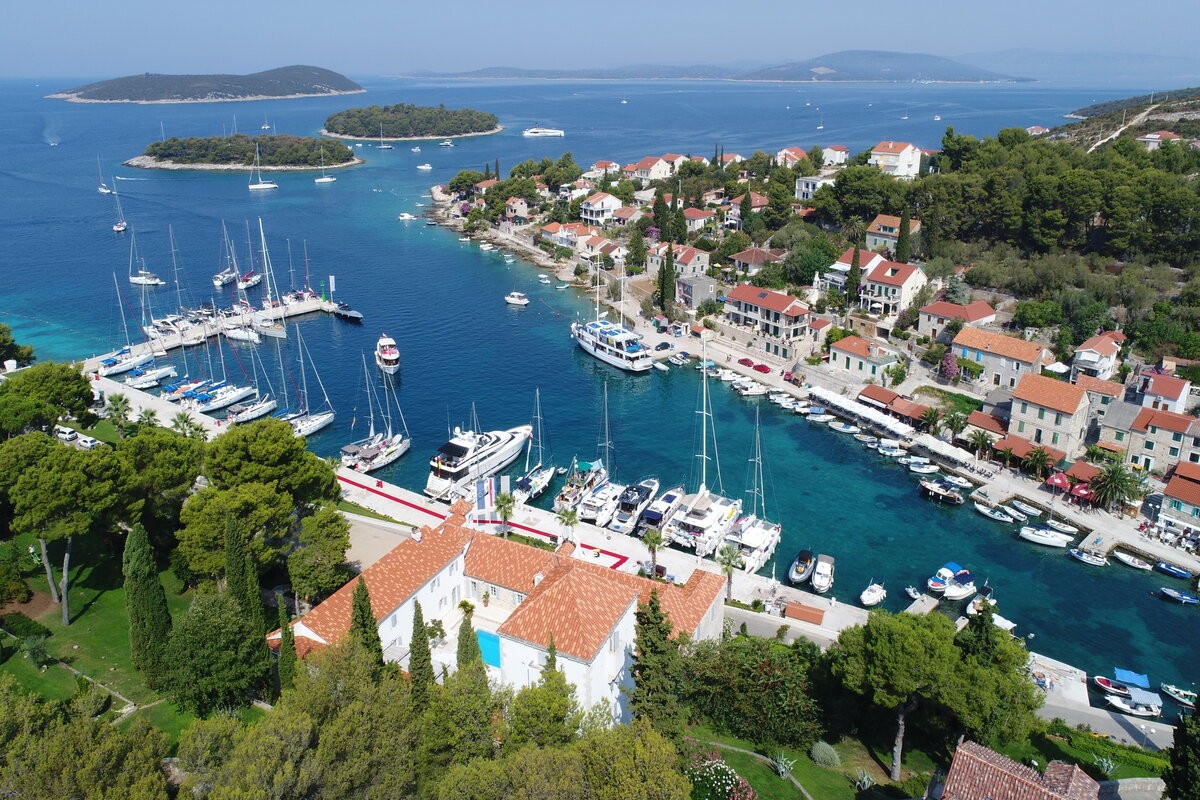 Šišmis: If you’re looking to dine with a view, there is no better spot than Šišmis in the sailor’s paradise of Šešula Bay. Serving a mostly seafood menu with a contemporary twist, Šišmis also offers guests a local wine list and free moorings.

Martinis Marchi: If you’re looking for a more luxurious dining experience, head to Šolta’s most famous castle! Crafting traditional local dishes using high-quality and healthy ingredients that are the heart of Mediterranean cuisine, Martinis Marchi even produces their own olive oil! And did we mention their terrace has garden and marina views?

Pasarela: But what about if you’re sailing by Rogač? Do not miss Pasarela, one of the island’s best restaurants and named one of Croatia’s best in 2019! A casual, no-frills restaurant built into the Rogač rocks provides diners with open views of the sea and standout local specialties and sharing plates that’ll have you wanting more. 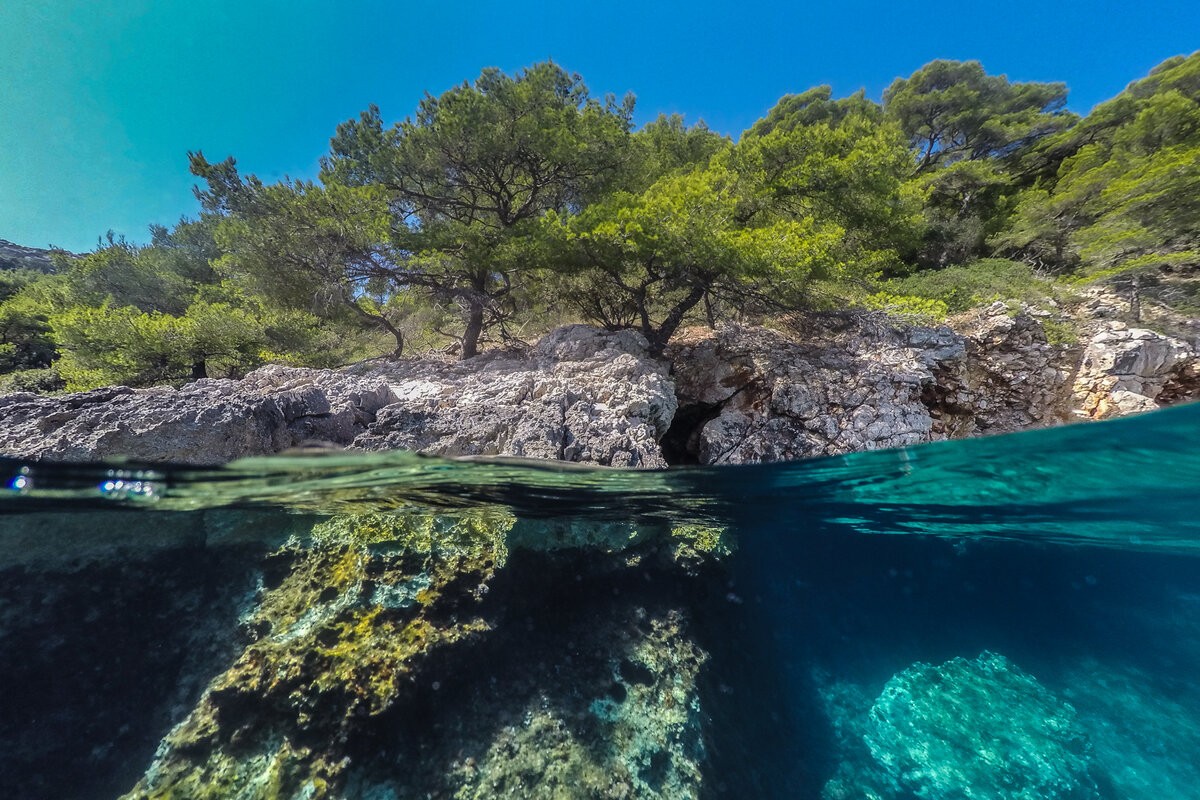 Sipova beach: This fine sandy beach on Šolta is arguably the island’s most beautiful. Sipova is located near Maslinica, surrounded by a pine forest with extended views of the Adriatic. A true natural paradise that is amenity-free, come to Sipoiva and stay awhile, but make sure you come prepared.

Krušica beach: If you’re on the north side of Šolta Island, you’ll want to head to Donje Selo, specifically Krušica, yet another natural wonder and one of the island’s hidden gems. Still unknown to tourists, Krušica doesn’t offer more than its spectacular location. Still, it promises to be one of the most relaxing beaches on your Croatian sailing holiday.

And if you’re looking for bustling local life and more amenities? The pebbled Nečujam beach is famous for families with the option to rent beach chairs and umbrellas. Stomorska beach is located in the center of this island town, with many restaurants and cafes within walking distance. The blissful Banje beach is just 10 minutes outside the Rogač harbor, while the magical Maslinica beach is located in the same town with a small bistro cafe if you need to refresh and recharge. 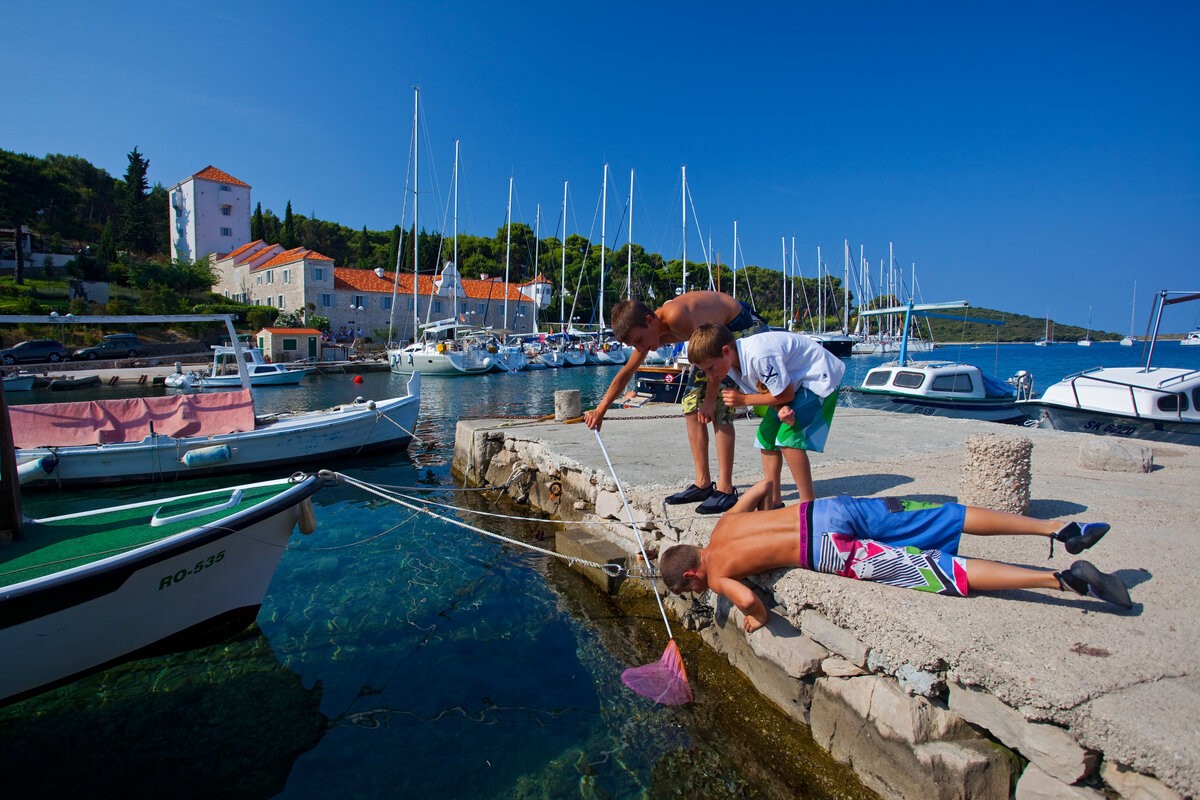 Wine tasting: You may not have known that Šolta has an indigenous grape variety, but that’s not surprising as it isn’t widely known in Croatia, either. Namely, Dobričić is the predecessor of the famous Plavac Mali and was brought back to life by locals in 2005. This dark red wine has been around since ancient times, with Hungarian King Bela IV and Marko Marulić as two famous figures that enjoyed it in the past. Do yourself a favor and visit a local winemaker, especially during the grape harvest at the end of August!

Explore award-winning olive oil: Did you know that Šolta has olive trees that are over 1000 years old? Or that Šolta olive oil has won several international awards? This is all due to the Zlatna Šoltanka Association, recognized with gold medals from New York to Tokyo and Dubai! Šolta olive oil has also been protected as a Designation of Origin since 2016, and we recommend you visit any olive oil producer on the island to taste Šolta’s liquid gold.

Sweet as honey: But wine and olives are just part of Šolta’s story, which expands into honey made from wild rosemary! Used since ancient times as one of the oldest traditions on the island, Šolta today boasts many beekeepers who offer honey workshops for visitors to gain deeper insight into this age-old production.

Enjoy the outdoors: Šolta is a gem for those looking for an outdoor adventure, from biking and hiking to kayaking or scuba diving! Hikers can especially enjoy the trek to the island’s highest point, Vela Straža, which rewards you with breathtaking views of the surrounding islands from its 237-meter-high peak.

Bike routes on the island lead from Maslinica to Stomorska. This tarmac mountain bike trail travels from Donje Selo, Srednje Selo, and Grohote with a detour to Nečujam before ending in Stomorska, passing through olive groves and dry stone fields on the way.

And if you want to dive into the underwater world? Several Šolta Island bays have become unique diving locations, mainly thanks to ancient artifacts. Šolta’s most famous diving spots are the underwater caves of Jorja and Senjska, while Livka and Stračinska offer gorgonians and coral reefs. In addition, a shipwreck can be found around Stomorska and Maslinica, while an ancient Roman wall adorns Piškera in Nečujam, where Roman Emperor Diocletian built a fishpond in 295 BC!

Blue Lagoon: While Šolta’s bays are a dream for sailors, just outside of Šolta on the small island of Drvenik Veli is Krknjaši Bay and the unreal Blue Lagoon, a cerulean oasis for boaters where multiple hues of blue glisten in the sunlight! Is there really any better way to spend your day?

Makarska - 'One of the Adriatic's Most Alluring Locations'