A masterpiece of the Mediterranean you may otherwise skip on your next sailing holiday, we’re here to tell you why Cres is one of the best.

How much do you know about the second-largest island in the Adriatic? An island mostly untouched, rugged, and hardly developed next to its counterparts? Meet Cres, a jewel of northern Croatia that sits in the Kvarner Gulf. Carpeted in dense forests and outlined by a jagged and indented coastline, Cres is praised for its ideal sailing conditions and pristine landscape, decorated by pebbled beaches and standout bays. 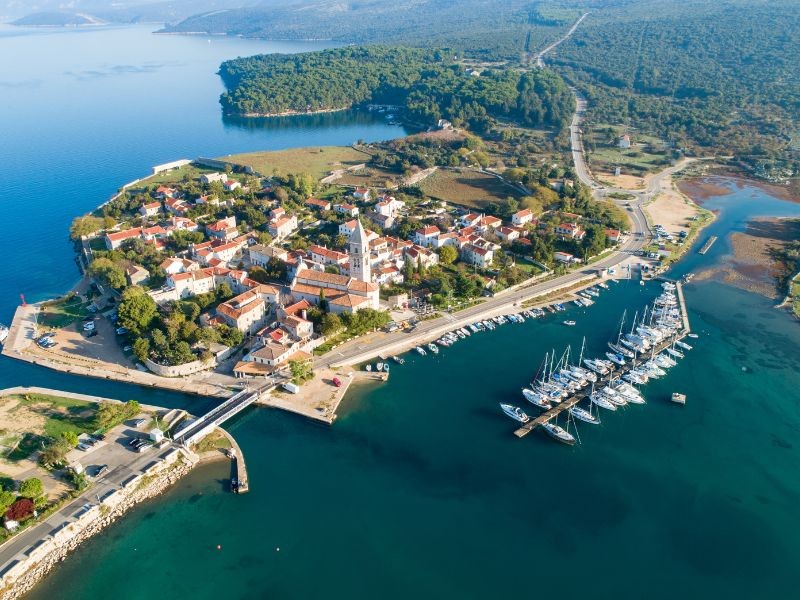 How can an island with only 3,000 inhabitants have such a vibrant history? This sparsely populated gem created of limestone and dolomite has actually been inhabited since prehistoric times. The Jami na Sredi cave site is a testament to the Paleolithic and Neolithic eras, while numerous castle settlements and graves originate from the Bronze and Iron Ages.

After the Liburnians and the Romans, the island was briefly ruled by the Ostrogoths and, after them, by the Byzantines. During the Middle Ages, the island was continuously inhabited by Croats, and in the 10th century, it was part of the Croatian state, as is evidenced by numerous Glagolitic inscriptions. However, Venice ultimately took control, ruling until 1358, and until 1409, Cres was under Croatian-Hungarian occupation.

It didn’t take long for the Venetians to return, controlling the territory from 1409 to 1797. Cres flourished in the 19th century due to the Austrians when Istria was part of the Austrian littoral. In 1920, it belonged to Italy, and after World War II, it was annexed to Croatia.

Cres is an island that has survived on agriculture, animal husbandry, and its dense forests. Shipbuilding and fishing began to develop after Venice ruled, allowing living conditions to improve. However, due to the increasingly strong development of steamships and the outbreak of phylloxera, a continuous decline in the island's population was inevitable. This pattern was steady even after 1945.

Sheep farming, olive growing, and viticulture are responsible for the island’s economic progress, while a shipyard, factories, and an oil mill opened after World War II. In the 1960s, a water supply system was built from the freshwater Lake Vrana, and electricity was brought in via an underwater cable. The main island road Porozina-Cres-Osor-Mali Lošinj was modernized in 1968, creating the essential prerequisites for the economic and social transformation of the island. Hotels and tourist facilities ultimately opened, and tourism thus came to life.

And how does Cres welcome nautical tourism? Thanks to its stunning ACI Marina! Namely, this year-round marina offers 440 berths for boaters, located just a few minutes from the heart of Cres town. But its stunning location is only part of its appeal. ACI Marina Cres is a multi-awarded marina named the best in the Adriatic in 2009 and 2010! A year later, it was recognized as the best marina with over 450 berths, and two years later, it took 3rd place in the same category. This Blue Flag beauty is a go-to for boaters traversing the northern Adriatic and is also applauded for its standout staff year after year (yes, it has won awards to prove it).

The island’s indented coastline provides good shelter with many sandy bays for swim stops. Some of the best anchorages on Cres are Krušćica, Meli, and Vrč, located on the extreme southeastern part of the island, north of Kolorat. 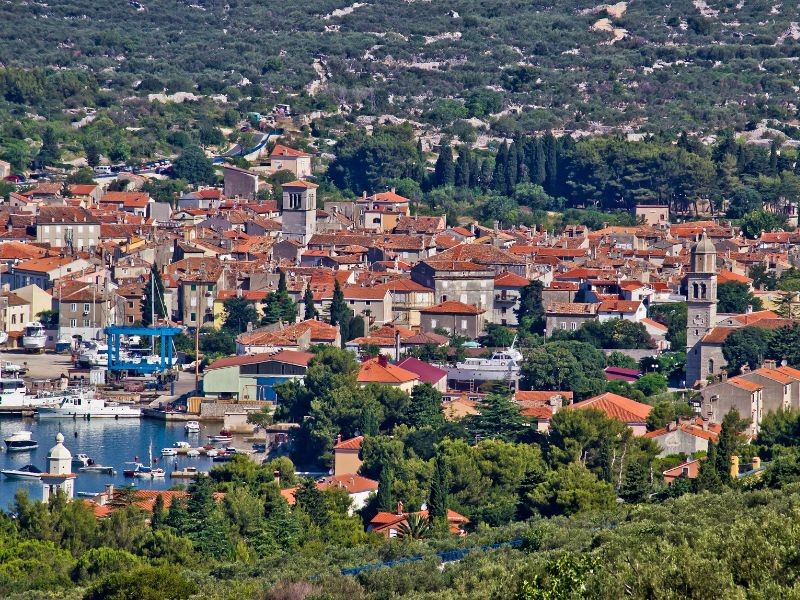 As we’ve already mentioned, Cres residents primarily engage in agriculture and animal husbandry, so you can imagine that Cres cuisine is a force to be reckoned with. For starters, you can’t visit Cres without tasting its lamb, sheep cheese, and, of course, olive oil. But that’s even without mentioning the seafood, which ranges from clams and crabs to lobster!

If you want a feel-good meal, head to grandma’s tavern, or Nonina Konoba, located in the town of Stivan. Lamb here is undoubtedly king, like lamb goulash and grilled lamb, but peka can also be pre-ordered, and their marinated fish platter is a great starter.

And if you want to continue on the lamb train, you can’t miss Konoba Bukaleta, located just outside Cres town in the village of Loznati. This family-run restaurant raises their own lambs and serves them in several ways, like on a spit! You can also count on homemade everything here, like the bread and olive oil, and you’ll love the rustic and homey interior.

If you're looking to eat seafood seaside, head to Santa Lucia, situated on the Cres town waterfront. Often praised as one of Kvarner's favorite restaurants, you can enjoy your lobster with a side of live music in the summer, too! 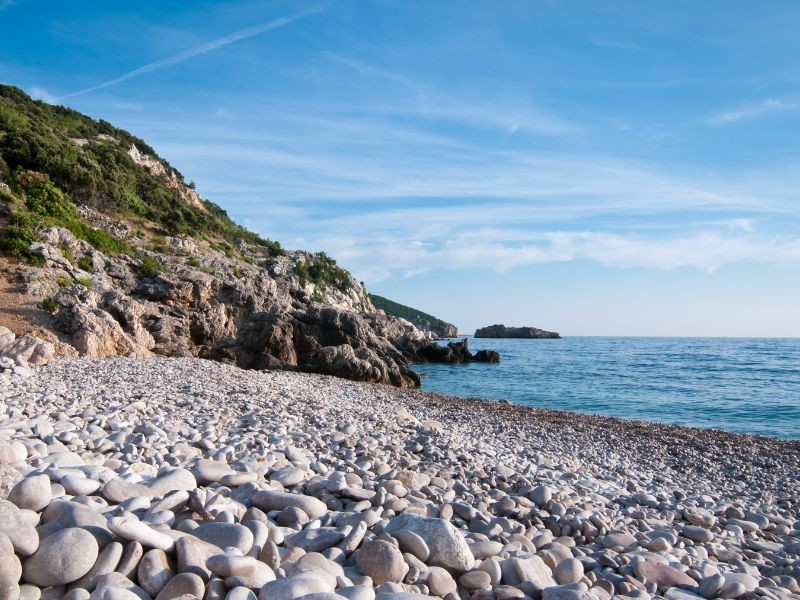 But where to beach? First up is Stara Porozina, a hard-to-reach gem that secludes itself even in summer. Situated in a well-sheltered bay near the small port town of Porozina, this pebbled beach is perfect for those looking for a peaceful swim, but make sure you come prepared - you won’t find any amenities here.

Mali Bok is another amenity-free jewel best visited in the early morning. Located near the village or Orlec, this idyllic cove is enveloped by tall rocks, but that doesn’t mean they provide any shade. Be sure to bring a parasol if you’re camping out for the day. We think the mesmerizing turquoise sea color will make the sunburn worth it.

And finally? Krušćica bay is close to the town of Merag and boasts a small pebbled beach known for its biodiversity. Wrapped by dense forest, it doesn’t get more picturesque than this! 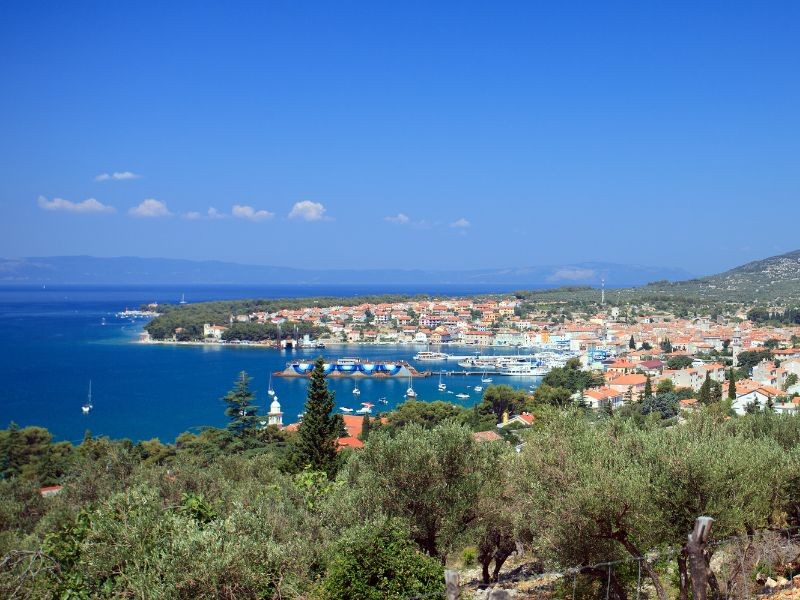 Whether you visit Cres town, Lubenice, Osor, Beli, Martinšćica, Valun, or Punta Križa, the island has much to explore.

Cres town is the largest settlement on the island, with foundations that first sprung up in the 1500s. A famous fortified town until the 20th century, Cres town today has a few landmarks worth visiting. Like the Gradska Vrata, Mala Vrata, and Vrata Sv Mikule, all intact city gates. The oldest patrician palace in Cres, Arsan Palace, also houses the Cres Museum, where you can learn about the town’s history.

Lubenice, on the other hand, is less lively than Cres town (which says a lot), though its impressive 4,000-year-old history makes it stand out. Located on a hilltop 378 meters above sea level, Lubenice was once of geostrategic importance to Kvarner in the Middle Ages. As a result, medieval remnants and several chapels, including a Romanesque chapel, mark the village today.

And if you’re near Lubenice? Head to Plava Grota, Cres island’s own ‘blue cave’ in Žanje Bay. Around 20 meters long, this cave erupts into an illuminating light show when the summer sun hits the crack in the cave just right. Two entrances allow visitors to swim or dive in, and if you feel like hitting the beach, Sv. Ivan is a pebbled paradise nearby.

You can’t miss the town of Osor, a cultural gem that separates Cres from Lošinj. Osor was once the second-largest Roman town on the Croatian Adriatic and a famous trading port. There are only 60 or so inhabitants in the town today, though it's worth visiting because of its central square. Namely, Osor’s bronze garden sculptures are based on the theme of music, laid when Osor’s musical evenings were held. A unique sculptural arrangement was created in many respects with reproductions of the most famous Croatian sculptors, such as Ivan Meštrović, Fran Kršinić, and Vanja Radauš, to name a few.

Did we mention that Cres island boasts the freshwater Lake Vrana, too? Not only does this lake supply drinking water to Cres and Lošinj islands, but it's also home to over 70 pairs of griffon vultures, protected in two ornithological nature reserves since 1986.

And this isn’t the only protected area on Cres. Tramuntana is a forested dream, with marked hiking trails, tourist trails, and cycling trails that stretch 100 km. Tramuntana has everything if you want to see abandoned villages, caves, caverns, pools, and sculptures.

And at the end of the day, if you still can’t escape the sea? Dive to Kvarner’s famous shipwreck - the Lina! This British-built freighter sunk 55 meters deep and has been underwater since 1914. Experienced divers can even explore Lina's engine room and the remains of its wooden cargo.

No matter where you are on the island, Cres is a sparsely populated spellbinding dream - and its stunning scenery is second to none.