Tucked into Šibenik’s inland hills are two gems you may think of skipping on your next sailing trip, mainly because they don’t stick out for sailors like the imposing UNESCO-protected towns along the coast. And while Krka National Park is widely known to tourists in Croatia thanks to its picturesque waterfalls, the small town of Skradin that sits next to it is often overlooked, even though it is the gateway to one of Croatia’s most sought-after attractions. No sailing trip should end without a visit to either of these two standout destinations, and we’re here to tell you why. 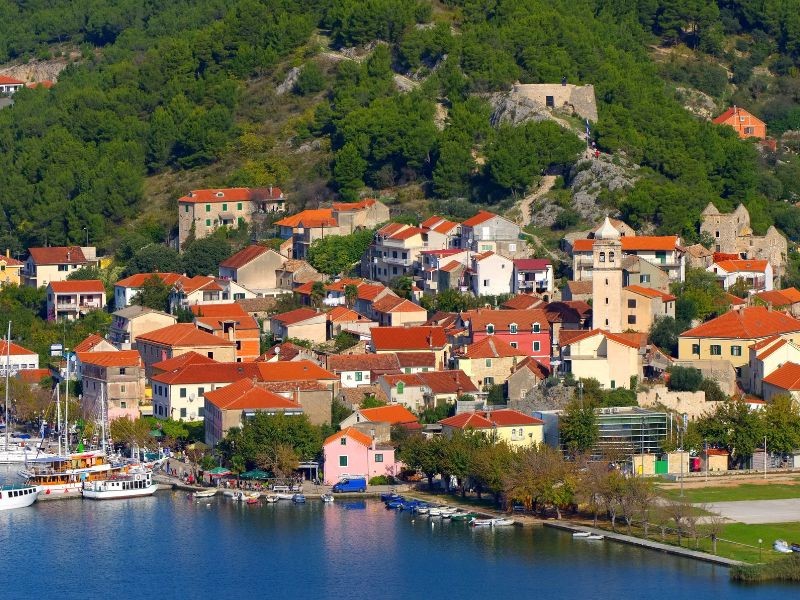 Let’s talk about Skradin first. Located on the right bank of the Krka River, this medieval town was born from the Roman town of Scardona, with roots that date back to the Iron Age. Pliny the Elder even called Scardona one of the most important cities of the time. Proof that Skradin existed during the Illyrian and Roman eras is thanks to several archaeological findings in the area.

After Scardona was devastated by the Goths, Skradin turned to Christianity and became an episcopal center. Migrations, raids, and devastation of many tribes marked the medieval period, which weakened Skradin economically and politically and did away with much of its Roman culture. And with the Ottoman invasions, Skradin continued to experience an economic and cultural decline.

Skradin ultimately came under Austrian rule, during which it lost its place as an episcopal center. Moreover, its economic and demographic trends continued to worsen, especially during Yugoslavia. A tourist boom hit the larger cities on the coast, including Šibenik, Zadar, and Split, while Skradin faced the negative consequences of economic migration and intellectual resources.

Skradin suffered significantly during the Homeland War, primarily from material destruction and population migration, though positive economic trends found their way back into this small town. Today, it's a hotspot for anyone visiting Krka National Park. But we’ll get more into that attraction later.

What about the marinas? 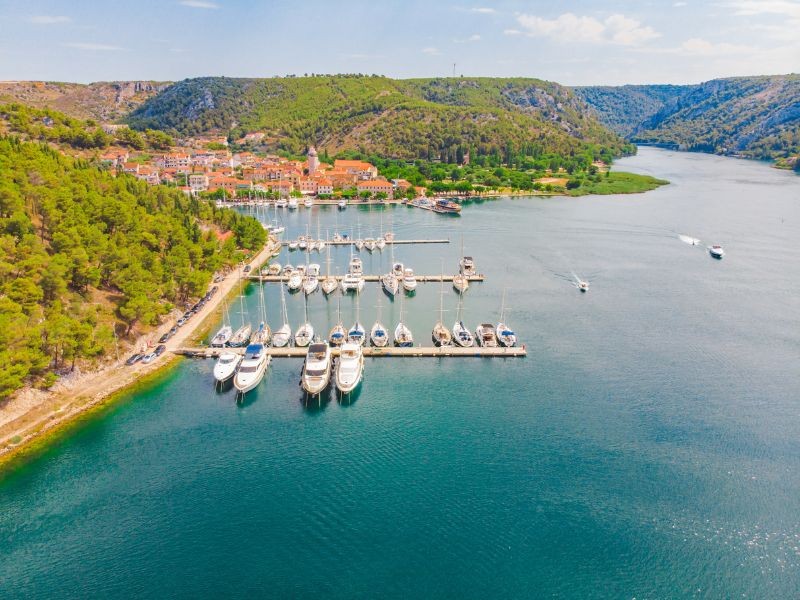 You may be wondering where you can park your yacht when coming into Skradin - the ACI Marina, of course! The picturesque ACI Marina Skradin is naturally connected to the town, strategically located, and well protected, with many amenities for its visitors. Especially appreciated by wooden boat owners who opt for sailing in the winter months, this marina has everything you need, from sanitary facilities to ATMs, laundry and reception, gourmet corners, and wine shops. Not to mention all of the restaurants, cafes, and shops in the town of Skradin itself. Open year-round with 180 berths, ACI Marina Skradin also boasts 24 anchoring buoys.

There is one specialty you must try when you’re in Skradin: Skradinski rižot (or Skradin risotto). And one place you have to try it is Cantinetta. This famous local tavern runs off tradition and is serious about serving authentic Skradin cuisine. Cantinetta is proud to be among the few in Skradin that know how to prepare this traditional meat risotto, which takes all day to make!

Another culinary treat in the town is Restoran Zlatne školjke, or ‘Golden Shell’, which opened in 1974. Located close to the ACI Marina, this is another restaurant that uses long-standing cooking traditions to prepare local specialties. Whether you’re looking for high-quality seafood, Dalmatian pašticada, traditional mullet, salted fish, or Skradin risotto, Zlatne školjke honors the best of local cuisine. 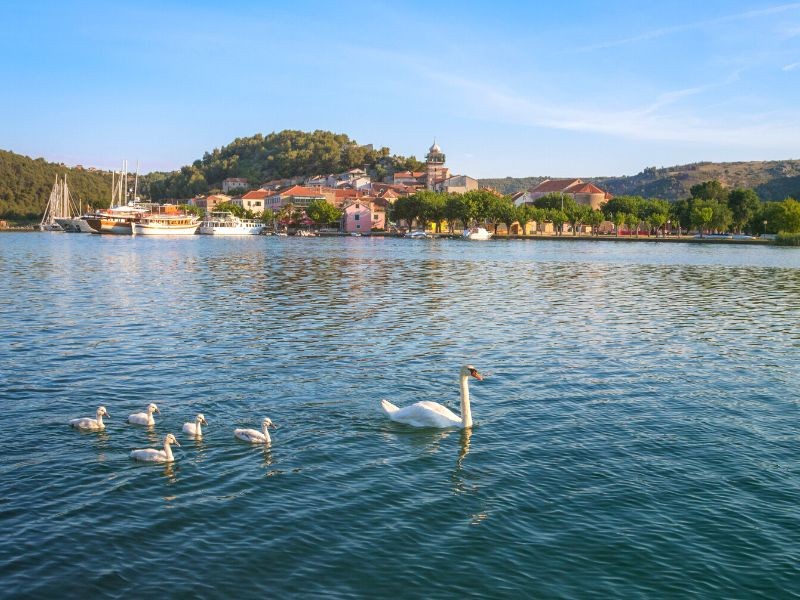 Skradin beach is the most popular. This well-maintained ​​pebble beach thrives in a natural environment just east of the Skradin bus stop. In addition to umbrellas and a children’s playground, there is an ice cream shop and a bar where you can kick back with refreshing drinks. And if you’re looking for a quick dip? Dive in at the concrete beach near the ferry!

What should you do when you’re in the area? 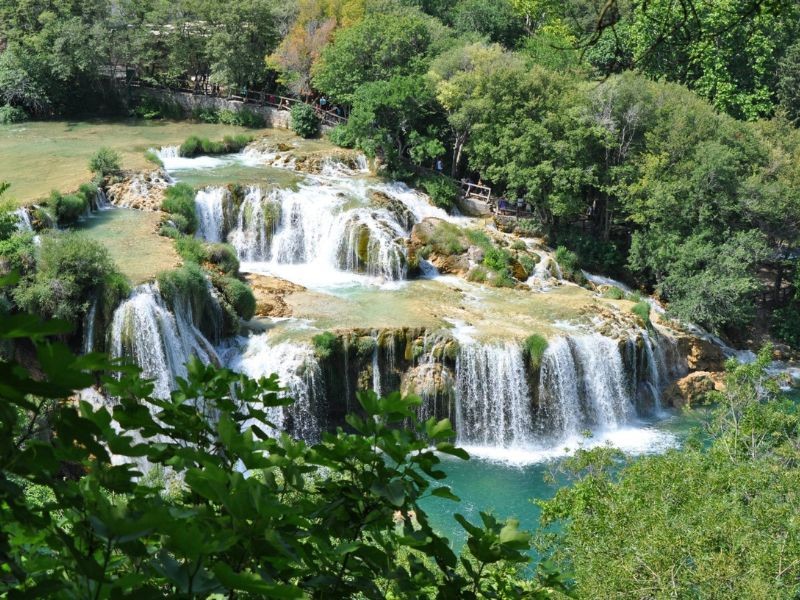 Krka National Park includes the area along the Krka river, which flows through a deep and colorful 75 km long canyon, forming seven travertine waterfalls. The most famous is Skradinski buk - the largest travertine barrier in Europe, which you could swim in until 2021. But that doesn’t mean you should forget about visiting Bilušića buk, Miljacka, Brljan, Rošnjak, Manojlovački, and Roški slap.

Two cultural and historical monuments stand out at Krka National Park, erected shortly after Krka was first mentioned in the 14th century - the Franciscan monastery on Visovac island and the Krka Monastery. Visovac island flows into a karst plateau, harmoniously combining natural and historical heritage. Surrounded by the hilly Miljevac plateau, monks transformed this island into a paradise of trees, colorful flowers, fruits, and vegetables after centuries of diligent work. After settling in 1445, Franciscans built the Our Lady of Mercy monastery and church, which was remodeled in the 18th century. But that hardly scratches the surface of what you can see at Krka National Park.

For example, did you know that this national park also boasts 470 kilometers of cycling trails, which wind around 1022 plant species and 175 animal species? Or that stone water mills from the 19th century and an Ethno village complete this natural karst phenomenon?

But that’s not all you can do in the Skradin area, and attractions within the town should not be missed.

Namely, Skradin was fortified in the 10th century, with the central fortress erected on the hilltop in the center of town in the 13th and 14th centuries. Thus, the Turina Fortress is one of the oldest buildings in the city, constructed during Pavao Šubić’s rule. This attraction is reached by walking uphill from the town, thanks to a handful of different paths. The easiest way is next to the Clock Tower Campanile, where you can reach the top in around 10 minutes. On the other hand, Clock Tower Campanile is a symbol of the town built in 1872! And you really can’t miss this one, as its tower can be seen from afar.

There are a few churches in Skradin, too, including the 18th-century baroque Church of the Blessed Virgin Mary (Crkva Male Gospe) in the center of town. You can also visit the Church of St. Jerome (Crkva Sv. Jere na groblju Skradin), located in the town cemetery, and the Serbian Orthodox Church of St. Spiridon (Hram Svetog Spiridona), circa 1878.

And if you want to venture slightly outside of Skradin? Don’t miss the wineries in the area, especially Bibich Winery, made even more famous when Anthony Bourdain visited for his popular culinary TV show ‘No Reservations’. Located in the village of Plastovo just 15 minutes outside of Skradin, this winery has a tradition of over 500 years and features the native Debit and Babić wines, with tastings hosted in the standout tasting room or outdoor terrace.

Another 15 kilometers from the town of Skradin is Bribirska glavica, one of the most important archaeological sites in Croatia (or "The Croatian Troy"). Covering an area of ​​about 72,000 square meters, this cultural attraction allows you to trace life back to prehistory, the Liburnian age, Early to Late Antiquity, and Early Croatian to Early and Late Middle ages!

Oh, and one last thing! Four kilometers downstream from Skradin is Croatia’s second-largest lake - Prukljan, formed at the beginning of the Holocene Epoch 10,000 years ago when the sea level rose by a hundred meters. You can find the tiny island of Stipanac in Prukljan Lake, which was connected to the mainland by a dam during Roman times. The remains of the Romanesque church of St. Stephen’s can be found on the island, with many other traces of ancient habitation in the area, like Middle Paleolithic and Upper Neolithic stone to villae rusticae, a Roman aqueduct, and the ruins of an early Christian basilica.