Rab is an increasingly bustling tourist spot and a paradise for boaters, with several stunning bays to anchor, tiny islands, favorable winds, and ACI marinas. It’s also the second greenest island in the Adriatic after Mljet National Park! But why else should you sail Rab?

It’s time to meet the ‘Happy Island’. Introducing Rab, an island that sits off the northern Croatian coast in the Gulf of Kvarner, stretching 22 kilometers long and 11 kilometers wide. Separated from the mainland by the Velebit channel, Rab is close to the islands of Krk and Pag and stands out due to its unique landscape - the northeastern side of the island is mostly barren, while the southwestern side is carpeted by the last oak forests in the Mediterranean! Once known as ‘Arba’ due to its dark green and forested scenery, Rab was first mentioned in 360 BC, and the island has come a long way since its ancient beginnings. 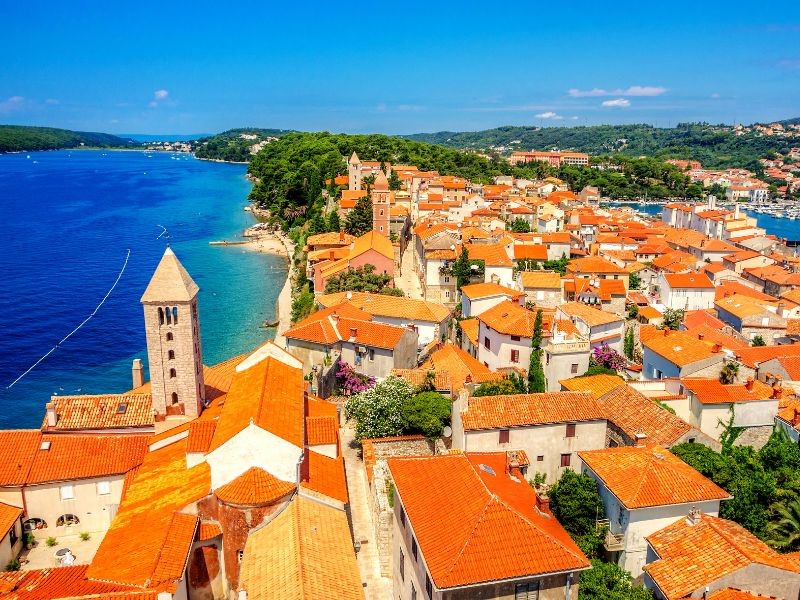 Rab Island was first settled by Illyrians in 360 BC, after which it became a Roman municipality in the 1st century BC. From the 11th to 13th centuries, it was governed by Croatians before it was sold to the Venetian Republic and called ‘Arbe’.

Venice ruled Rab until the 18th century when Napoleon briefly visited. Then came the Habsburgs in 1815, who stayed until 1918. Italy decided to cede Rab to Yugoslavia in 1921, resulting in most of its Italian-speaking population leaving for Istria and Italy.

However, Italy still left its mark, and during World War II, they established a concentration camp on the island. A memorial in the village of Kampor commemorates this former site today.

But what really stands out about Rab’s history? Interestingly, Saint Marinus, a stonemason better known as the founder of San Marino, was born on the island. He’s also the patron saint of Lopar and plays a crucial part to the town’s locals.

And even more interesting? Rab is a historically famous naturist destination, made especially famous after King Edward VIII and his future wife Wallis Simpson stripped down in the bay of Kandarola on the Frkanj peninsula in 1936! 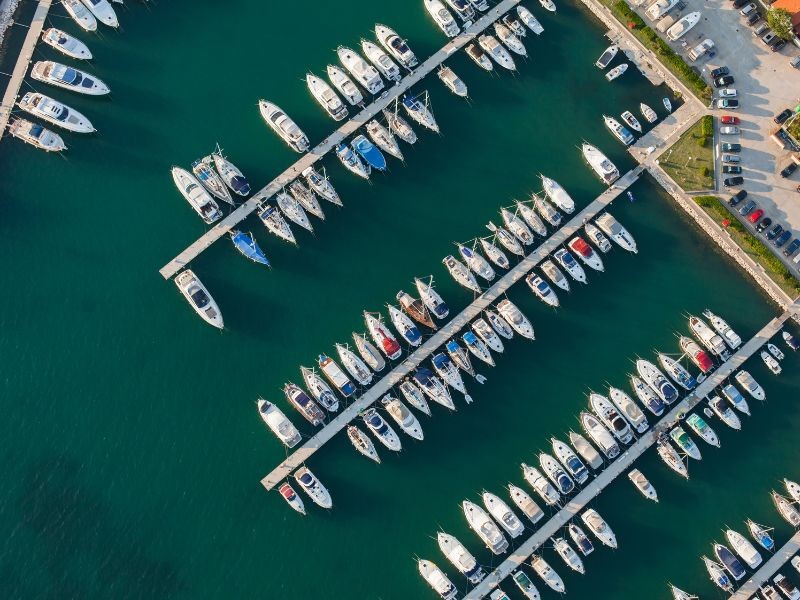 The island of Rab is known for having two ACI Marinas - Rab and Supetarska Draga. ACI Marina Rab is located in the Rab town harbor, equipped with 134 berths. This marina also boasts a restaurant and maintenance and repairs shop among its amenities.

Rab’s second ACI Marina, Supetarska Draga, is located in a small fishing village and one of the oldest settlements on the island at the end of Supetarska Draga Bay. Supetarska Draga is open throughout the year and offers 344 wet berths. It's also famous for its restaurant Vojko which has been operating for over 20 years!

If you’re not eating at Vojko, don’t fret - the island of Rab has many other gems. Like Santa Maria, just around the corner from Rab town’s main square. What makes this restaurant extra special is that it's housed in a mansion from the 1800s. Surrounded by stone walls, with some tables boasting a sea view, the food is pretty good too, and seafood is undoubtedly king.

Restaurant Ana is another must-visit dining spot just 5 minutes outside Rab town. It is run by a local family where fresh seafood and local ingredients run the show. You’ll want to try the seafood platter here, and you won’t be sorry.

Gostionica Feral is another go-to on the island, located on the north side of Rab island, not far from the Lopar ferry port. An institution that’s been operating since 1971, this family-run joint also prioritizes seafood with a homestyle touch. Don’t forget to pre-order octopus peka, which is one of its standout meals!

Wherever you decide to eat on Rab (and trust us, this list hardly scratches the surface), you must order Rab cake. Made with almonds and Maraschino liqueur and traditionally baked in a spiral, you’ll thank us for crowning your meal with this treat later. 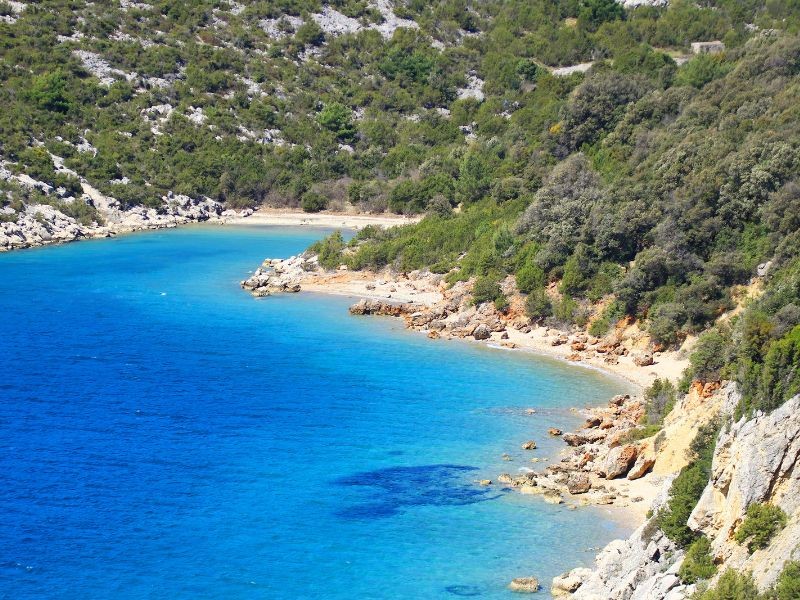 There is no lack of breathtaking beaches on Rab, but that’s not surprising. The most popular is surely the sandy Rajska Plaža, or ‘Paradise Beach’ to make it flow easier off the tongue. Facing the islet of Lukovac on the southern side of Lopar, Rajska Plaža has it all - from restaurants and cafe bars to volleyball and parasailing. Stretching nearly 2 kilometers and shaded by pines, this beach was also named one of the world’s 100 best beaches by CNN! Did we mention that it has proudly carried the ‘blue flag’ for cleanliness since 2003, too?

As we have already mentioned, Rab is known for its naturism, meaning there are a few secret spots where you can strip down to your birthday suit. Follow the footsteps of Edward VIII to test out Kandarola beach, or head to the slightly more remote sandy Sahara beach just north of Lopar. Don’t expect any amenities here, though you will stumble upon several other beaches in the area.

The island's south side is also known for many swimming gems, like Pudarica near Barbat, where the sea can’t get any clearer. And near the village of Kampor is arguably the most beautiful spot on the island - Suha Punta. Swimming on Rab does not disappoint. 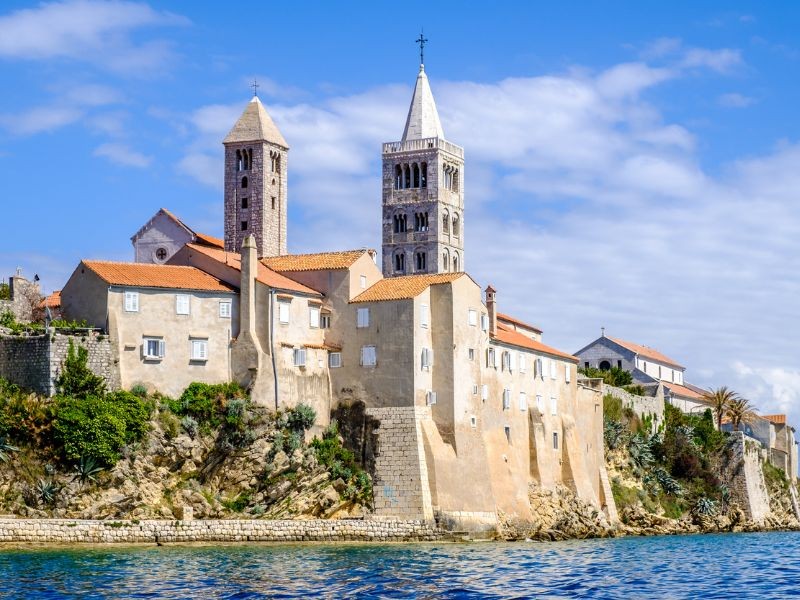 As you can probably gather, Rab town is the hotspot to visit on the island. It is its namesake, after all. Not so surprising, Rab town has been awarded as one of the Adriatic’s best tourist destinations. Ancient city walls and the bell towers of four church towers make this town recognizable, namely the church of the Assumption of the Blessed Virgin Mary, the church of St. John the Evangelist, the church of St. Andrew the Apostle, and the church of St. Justine, where you can find the skull of St. Christopher, the patron of the island. And if you’re into sacral art and artifacts, you can’t miss the Franciscan Monastery of St. Bernardin, which also has two churches.

If you head slightly inland from Rab town, you’ll be greeted by a natural oasis of Cypress trees, oaks, and Aleppo pines - Komrčar park. Beat the heat in the shade and wander down the paths that lead to the many beaches. There is no better way to cool off after a warm day.

And if that’s not enough for the nature lovers in the group? Head to the Dundo botanical reserve on the Kalifront peninsula, where the holm oaks date back centuries! The well-manicured trails are great for all ages, too.

Okay, back to the cultural attractions. We can’t forget to mention Veli Zvonik, the ‘Great Bell Tower’, which was built in the 12th-13th centuries (the exact year is still under debate). This Rab town Romanesque-style tower stands 26 meters high and can be climbed by visitors for stunning sea views.

And if you’re a fan of heights? Don’t forget to hike to Rab’s highest point, Kamenjak, which sits 408 meters above sea level. While the road up is steep, you’ll be rewarded at the top with a restaurant open in the summer months.

The Monastery of St. Euphemia is one of the island's most important historical attractions. Just a 2.5 km walk along the seaside promenade from Rab's old town, this Franciscan gem dates back to the 13th century and can be explored by a tour.

But what about Lopar? Twelve kilometers from Rab town is where you’ll find a paradise of natural sandy beaches, enveloped by small islands and islets, and the winner of the Blue Sail award for the best small town in Kvarner bay. Not far from Lopar is Geopark Rab, an area of ​​significant geological heritage where you can hike, bike, or walk through 50 marked geological points.

And if you think you’ve done it all, don’t forget to take the promenade from the beaches of Banjol to the neighboring village of Barbat. Only then can you say that you’ve explored all that Rab Island has to offer.