Sailing our way into Šibenik-Knin County are three lesser-known pearls compared to its more famous coastal counterparts - Primošten, Tribunj, and Vodice. Small seaside tourist towns applauded for their charm, Primošten, Tribunj, and Vodice may not have all the bells and whistles of larger tourism destinations on the Dalmatian coast - but that doesn’t mean they should be missed on your next sailing holiday. 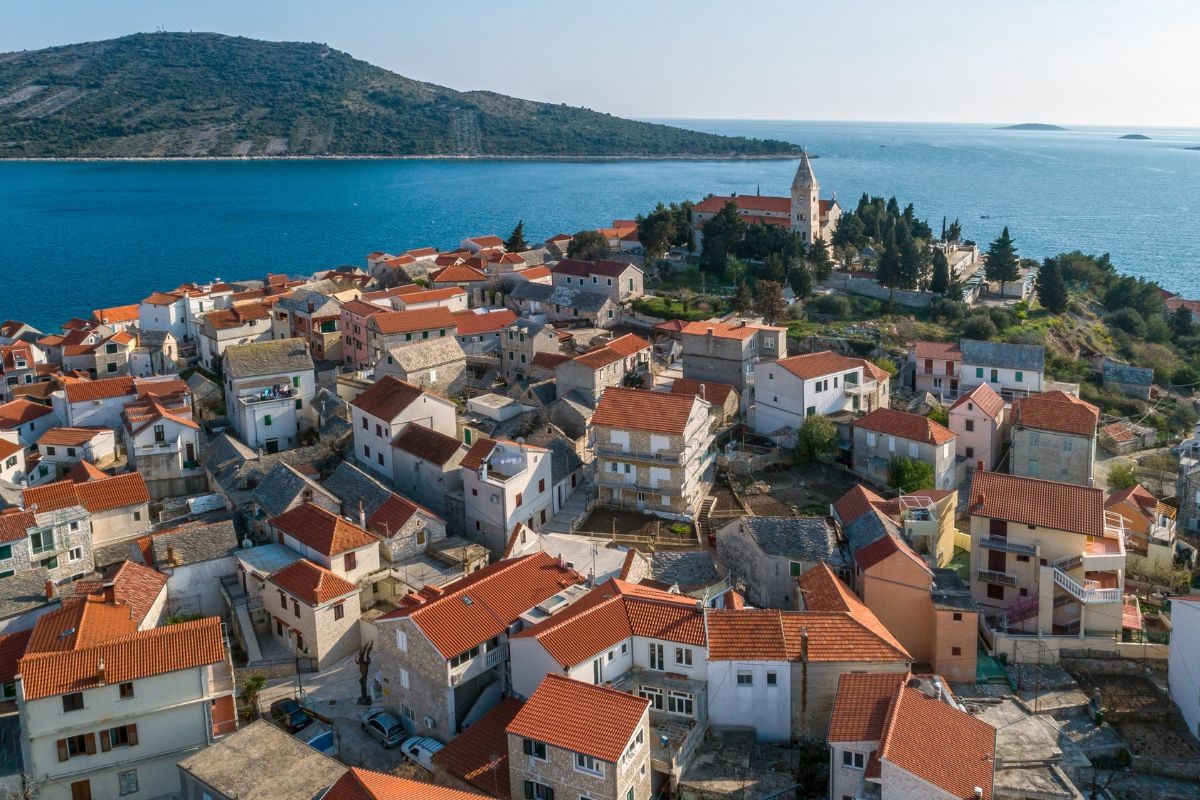 Traces of early Illyrian, Greek, and Croatian settlements are known in the Primošten region. In the Middle Ages, this region was called Primorje (Parathelesia), and until the end of the 19th century, known as Bosiljine. Two regions were ultimately created from Bosiljine: Primošten and Rogoznica, which today is about 8 kilometers away from Primošten by car.

Residents of the Primošten area took refuge from the Turkish troops in the 15th century and founded a new settlement - Primpšten. The settlement, which was built on the islet, was first mentioned under the Croatian name Primošten in 1564.

Primošten expanded at the beginning of the 19th century, and its standout natural features, Velika and Mala Raduča coves, and especially Porat, are extraordinary natural shelters. After World War II, many of Primošten’s residents turned to winemaking, and several young vineyards with the well-known ‘Babić’ variety can be found there today.

In the second half of the 20th century, Primošten was discovered as a haven for Esperantists under the motto "Sun, sea, friendship, health", making it a destination for international people of good will, regardless of color, race, religion, stature, appearance, authority and power. This was the real beginning of tourism in the area.

After residents laid the foundations for tourism, Restaurant "Kremik" opened in 1956, and locals began renting rooms. A camp opened in 1962, and the first Raduča hotel came after that, with tourism expanding to the Raduča peninsula. Primošten’s first luxury hotel opened in the beginning of the 1970s and was a paradise for naturists until 1991. After the Homeland War, Primošten’s tourism boomed once again.

The oldest part of the town is located on Sv. Nikola hill, on top of which the medieval fortress Jurjevgrad was built. ‘Jurjevgrad’ was Tribunj’s former name from 1298 until the end of the 17th century.

Today's Tribunj was built on an island, which was later connected to the mainland by a stone bridge. It was first mentioned in 1463 under the name Tribohunj. Also once known as Trebic, Trebiste, Trebunj, Tribohunj, Tribohum, and Trebocconi (its Venetian name from 1684), it is unknown whether the town’s name comes from the sun god of the pagan Croats or the Slavic word meaning "place of sacrifice".

At the beginning of the 20th century, the remains of the Jurjevgrad fortress were discovered, which was built during the Venetian rule to defend against the Turks.

Tribunj’s residents were mostly engaged in agriculture and produced good wine and olive oil, and because the area abounded in cherries, it gained interest from Zadar, which bought its cherries to make liquor.

Tribunj transformed into a vacation destination in the 18th century, welcoming upper-class captains and commanders from the region and Venice. Today, fishing, olive growing, and tourism feed the economy, and most of its 1,600 permanent residents offer quality and affordable private accommodations.

According to archaeological findings, the hinterland of Vodice was inhabited in prehistoric times, and during the Roman Empire, it was an important commercial intersection of roads with the nearby settlements. The first mention of the name Vodice, however, was in 1402.

The first significant development and settlement of the center of today's Vodice can be traced back to the 15th century, when Turkish invasions forced the population from the fields to the sea, with high walls and fortifications built to defend against the Turks. Among the oldest monuments in the center of Vodice is the Parish Church of St. Cross (1746-1749) and the Čorić tower.

In the 17th century, Vodice’s residents were known for producing extremely high-quality olive oil, wine, and excellent sour cherries. They also sold their drinking water, for which ships arrived from Zadar until the end of the 19th century. The ever-improving living conditions ultimately caused the town to expand beyond the city walls and Vodice was part of the Municipality of Tisno until 1891.

After the Homeland War, tourism began to develop alongside agriculture - and after more than sixty years of tourism, it is the most significant and developed branch of the Vodice economy today. 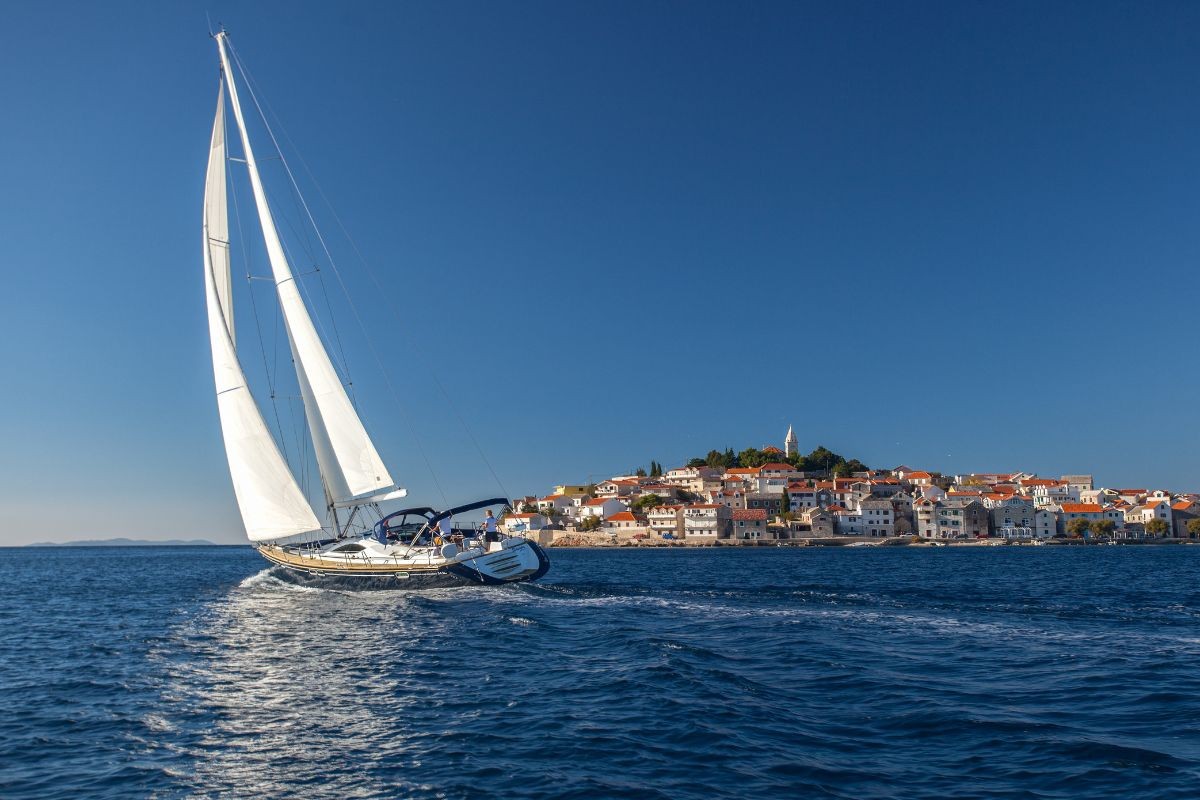 Marina Kremik is located near Primošten as one of the most protected ports in the Adriatic. The marina boasts 393 sea berths and is fully equipped with water and electricity, parking, showers, toilets, restaurants, a mini market, reception and exchange office, ATM, boat shop, and petrol station.

D-Marin Tribunj is one of the newer marinas on the coast. Located in a town with a rich maritime tradition, D-Marin has 220 sea berths, a petrol station, top-quality boat service, and accommodations. D-Marin Tribunj was the company’s fourth D-Marin destination in Croatia and fifteenth in total.

Located in the center of town (Vrulje Cove), Marina Vodice is an acclaimed marina in Dalmatia that was awarded third place in the “Tourist Flower – Quality for Croatia” for the best medium marina on the Adriatic in 2017. With 393 sea berths and many amenities, ACI Vodice really gains its appeal thanks to its central location, keeping boaters in the middle of the summer buzz. 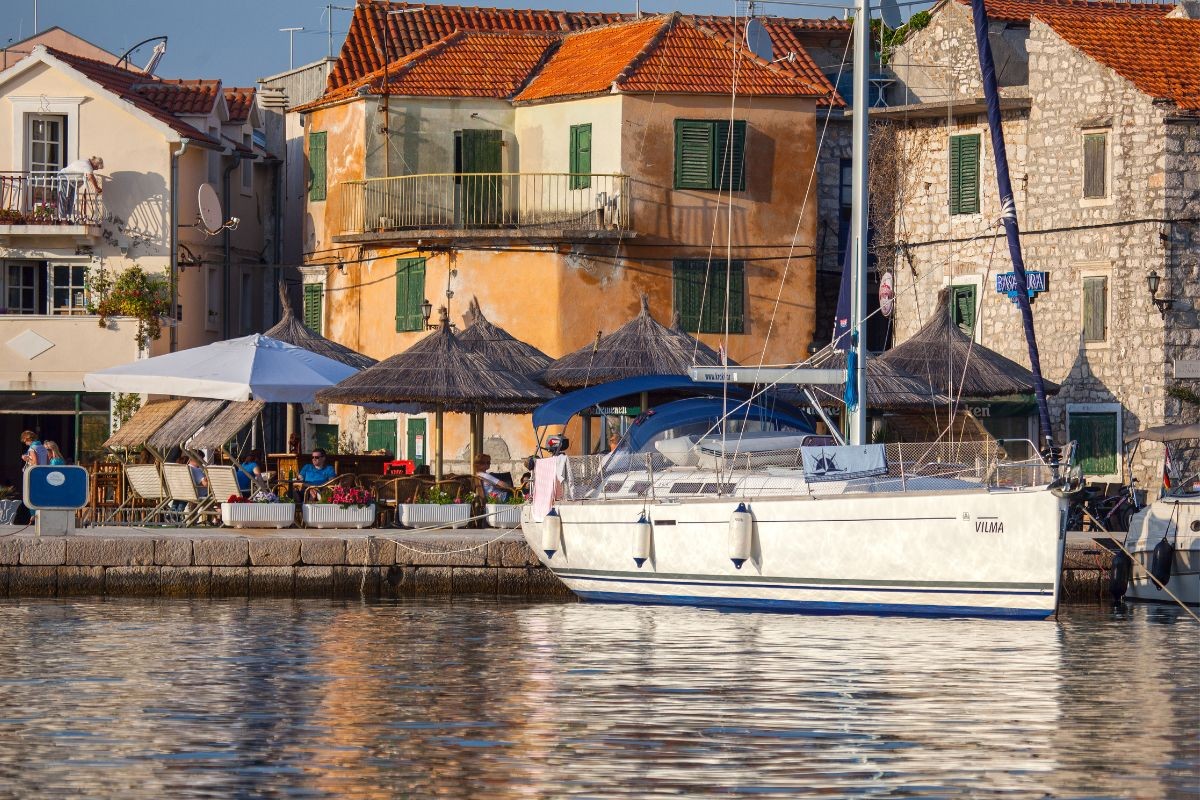 Gostionica Varos is a family-run restaurant just off the main beach street. With only 20 seats offered in a garden setting, this dining spot specializes in Dalmatian cuisine, from black risotto to local favorite buzara.

Konoba Dvor is located in the heart of the old town near the Church of St. George, and far enough away from the hustle and bustle of the marina. This intimate hidden gem is also a seafood sanctuary, with many local classics to enjoy.

Off the beaten track and away from tourist traps is Šarićevi Dvori, located in the hills above Primošten. This farmhouse restaurant offers fresh food following grandma’s recipes and is also the best place to try traditional peka, or meat cooked under the bell!

Plavi Val is slightly hidden away from the more popular tourist areas and tucked into a bay with sea views. From lobsters to grilled fish and Dalmatian meat dishes, Plavi Val’s homestyle cooking can be felt on each plate.

Tri Piruna is one of Vodice’s first restaurants, opened on May 1, 1973. Owned by the Alfirev family, Tri Peruna has around 55 seats, decorated by wood and local stone, and authentic old Dalmatian objects from tablecloths to chandeliers. Bringing local ingredients into the modern world for a rustic yet contemporary dining experience, this restaurant is also Michelin recommended.

And finally, Karmelski Dvori-Konoba Okit has endeavored to give Vodice market-fresh ingredients, honest cooking, and an enjoyable atmosphere since 2014. All dishes are made in-house by talented chefs, and their dry-aged Simmental beef is certainly most popular! 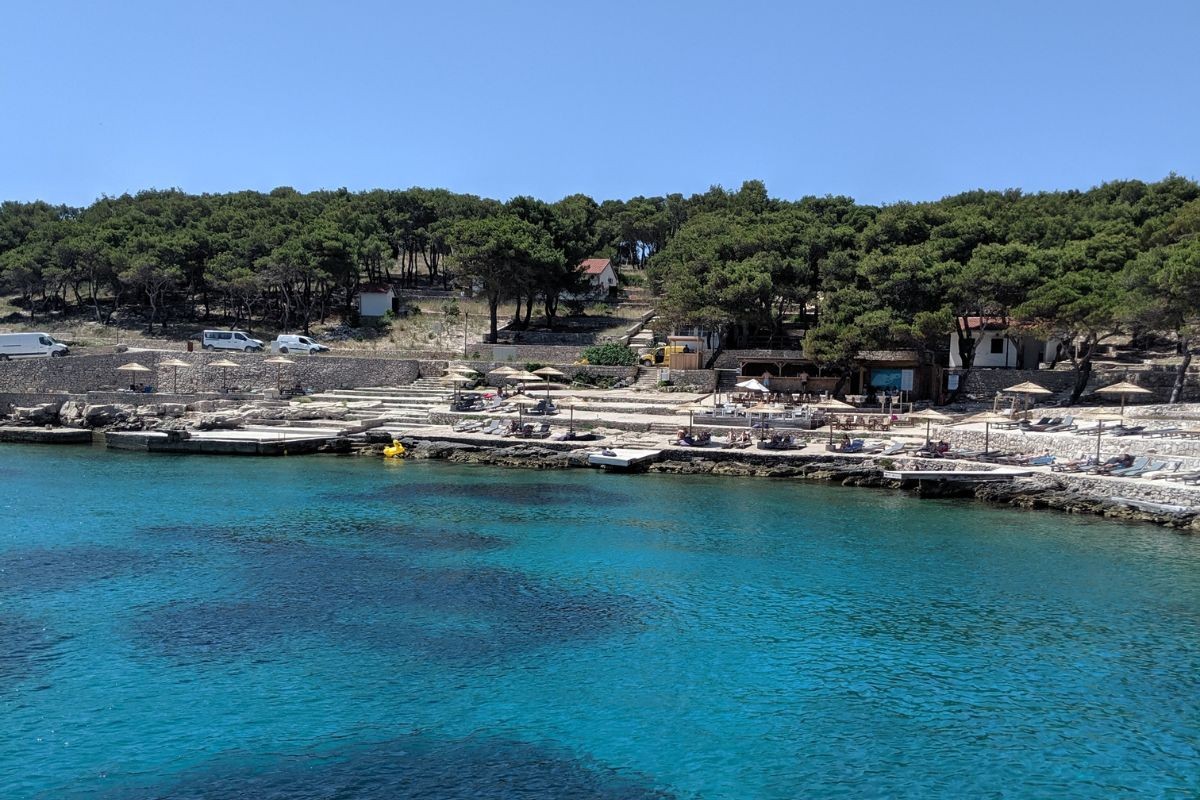 One of Primošten’s most popular beaches is Velika Raduča, located on the eastern side of the Raduča peninsula just across from the old town. The longest beach in Primošten is also great for families with kids and is a short walk from the center of town.

Dagna Beach is a quieter option about 15 minutes on foot from the old town. This hidden bay is a local secret and go-to spot for snorkelers thanks to its incredible visibility. You can also visit Bau Bar if you get thirsty!

The longest beach in Tribunj is Bristak Beach. A natural beach manicured by the nearby hotel, Bristak is a top choice for families with children with lounge chairs and umbrellas for rent.

Plaza Zamalin is located at the north of Tribunj. Enveloped by pines, this beach has a little bit of everything - from pebbles to concrete and stone. There are even easy entry points for swimmers that need an extra hand. In addition to beach bars and a few restaurants, Zamalin also offers natural shade.

Another popular beach in Vodice is Plava Plaza (Blue Beach). Located about 1 kilometer from the center, this pebbled and sandy beach is an aquamarine oasis that is applauded for its cleanliness and facilities. It was even awarded the Blue Flag!

One of Primošten’s only historic sights is the Church of St George, a three-nave stone church built in 1485. Set on a hilltop offering a stunning view, you can also explore the bell tower and tombstones in the cemetery.

A newer attraction is the Our Lady Of Loreto Statue built in 2017. While it may not have the vibrant history the rest of Croatia’s coast boasts, it’s hard to miss. Included in the list of Our Lady shrines, this statue sits atop Gaj hill, about 2 kilometers from the center of town. The hike to the top is not for the faint-hearted, and could take 15-20 minutes until you finally reach the statue, but once you do, you’ll be greeted with a 17.5-meter-tall Virgin Mary - and did we mention the view?

Primošten is also a great place to go diving, with around 50 dive sites taking you around caves and cliffs to World War II wreckage! Experienced divers can dive to see the German Stuka plane and the Italian cargo ship ‘Francesca di Rimini’.

And don’t forget about wine tasting! Primošten’s inland area is decorated with vineyards, where you can taste the native Croatian Babić variety.

St. Nicholas hill rises 60 meters behind the old town, which also features St. Nicholas church, built in 1452. One of Tribunj’s most important landmarks is a 10-minute hike to the top, but we promise it’s worth it.

Cycling is also one of the more popular activities in Tribunj, with several manicured trails that take you through vineyards and olive groves, drystone walls, farms, and plenty of panoramic views.

Don’t miss the Parish Church of St. Cross, built by Dalmatian Baroque master Ivan Skok and consecrated in 1760. It is one of the most important baroque churches in Dalmatia today. Also be sure to check out the altar and altarpieces with frescos of the Holy Family, the Heart of Jesus, and saints Vinko the Martyr and Stanislav Kostka.

Cycling is also big in Vodice, as are casual strolls along its coast, with plenty of water activities to be had, especially in the nearby lagoons of Logorun and Lukovnik. And if you want to put your sea legs to work? Hike up to the Okit hill! Yes, you’ll be greeted with a view there, too.