Yo ho, yo ho, it’s a pirate's life for anyone visiting the town of Omiš! Once a base for buccaneers in the 12th and 14th centuries, this picturesque town is set at the mouth of the Cetina River, between the busier cities of Split and Makarska.

A nostalgic coastal town fixed in front of the flourishing Cetina River Canyon, charming stone houses and the traces of its past are sprinkled throughout its historic core.

Where the Cetina River meets the Adriatic Sea, Omiš today is a popular tourist resort known as a haven for adventure tourists and outdoor enthusiasts; a playground for travelers looking to exercise their sea legs. And it is one Adriatic escape you’d be a fool to miss. 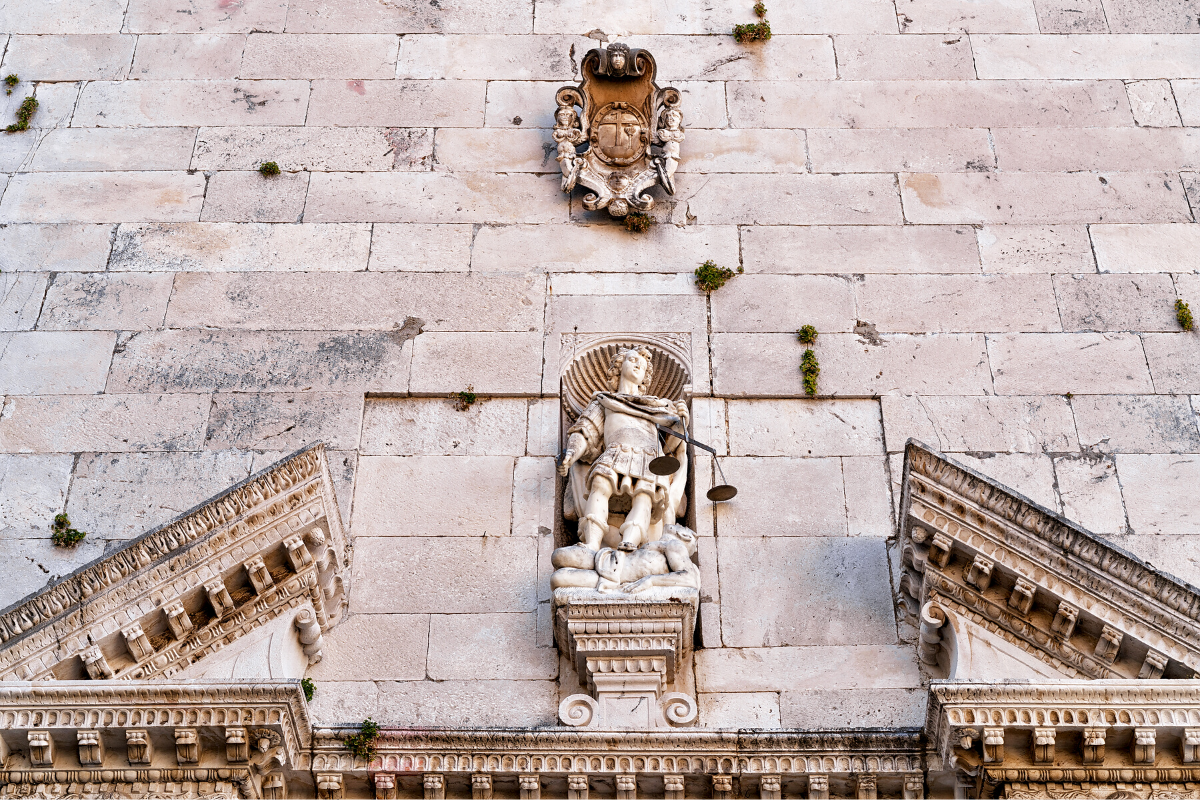 While the origins of the name ‘Omiš’ aren’t totally clear, with some sources saying it derived from the Illyrian-Greek word Onaion, meaning “place on the hill," and others from the Proto-Indo-European almissa, or "rock," "cliff", we do know that Omiš has a long and vibrant history.

Piracy was an essential means of acquisition for the people of Omiš during the Middle Ages, which was made possible thanks to its first-class seamen and fast boats called ‘Omiš Arrows.’ In addition, Omiš pirates pumped money into the town, which resulted in constructing fortified walls in the 12th century to prevent potential invaders and the threat of the largest military forces.

Omiš pirates protected the town for over 400 years until Ladislaus of Naples sold Dalmatia to the Venetian Republic in 1409, wholly doing away with its powerful pirate past. Omiš recognized the rule of the Venetians in 1444, which it remained part of until 1797.

After the fall of Venice, Omiš belonged to Austria until 1805 and to French rule from 1805 to 1813. After the fall of Napoleon, Omiš was occupied by the Austro-Hungarians, where they remained until the end of the First World War.

The first hotels in Omiš were erected during this time, and quick steamship lines saw Omiš as the chosen destination for male travelers from Split, who would visit the Cetina River already in spring. After WWI, Omiš was a tourist destination for both locals and foreigners, with the first tourist guide published in 1929. Once the Adriatic Highway came into play in the 1960s, Omiš saw even more significant tourism growth, with the number of beds in town increasing in hotels and private accommodations.

Travelers from Germany, Austria, and the Czech Republic have long been the most loyal guests in Omiš, which today is a summer resort that lives off tourism. 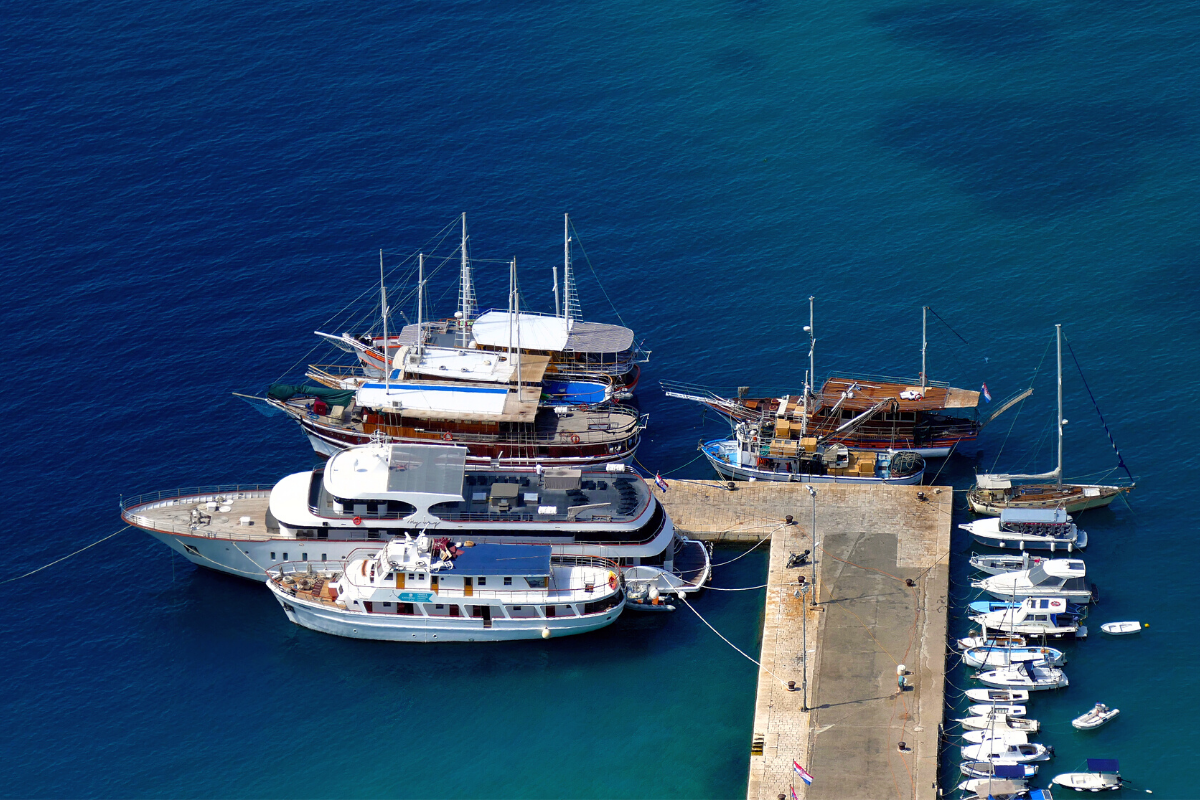 Omiš does not boast a grandiose marina for megayachts and large cruisers, but that adds to its quaint coastal appeal. Instead, Omiš has a small jetty with just a few berths for yachts, though you’ll find it’s mostly occupied by local boats.

Omiš is known for attracting the gusty bura wind, though if you sail here during more mild weather, you can anchor just south of the small harbor at a depth of about six meters. And while the marina may be nothing special, Omiš is a super stop for boaters looking to indulge in local restaurants or stock up in supermarkets.

Where to eat and drink 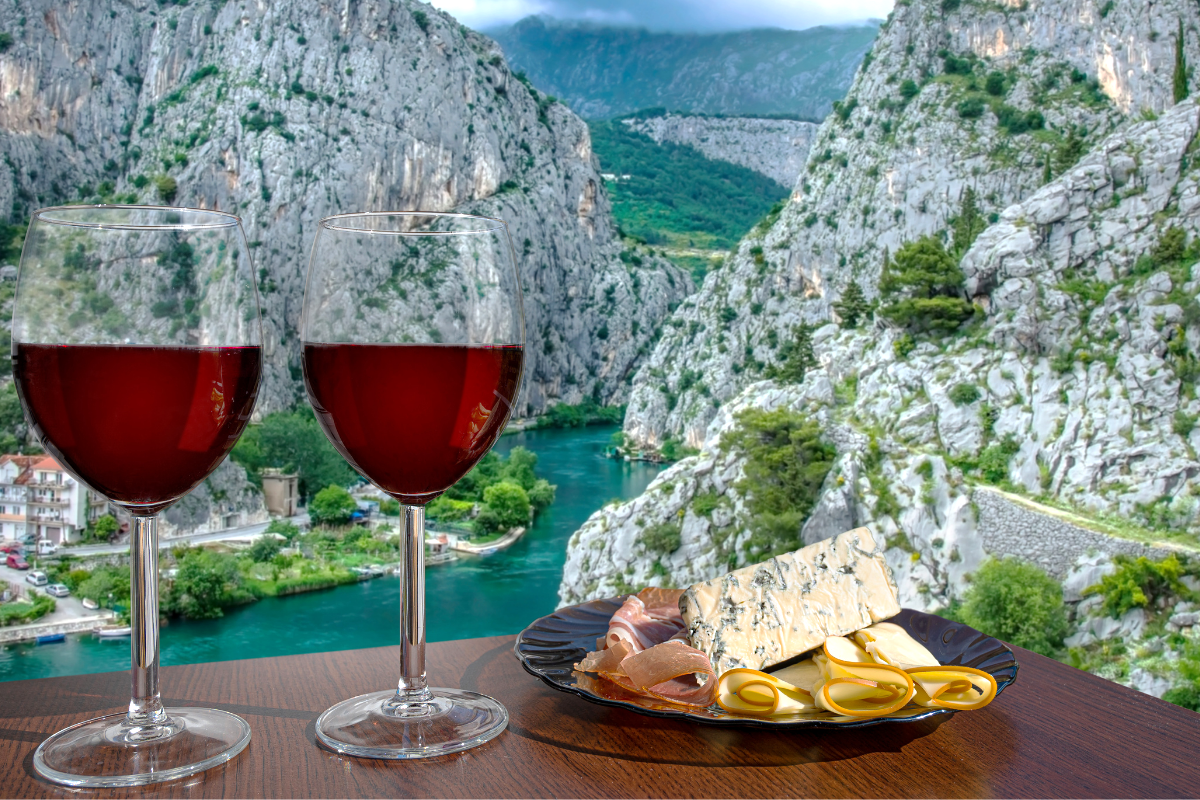 Founded in 1967, Pod Odrnom is a family-run restaurant and staple of the town. With Dalmatian and Mediterranean cuisine in focus, the Pod Odrnom menu honors local products and ingredients to craft meat and seafood specialties perfectly paired with Croatian wines. Located on a romantic street behind the town pharmacy and tourist office, Pod Odrnom is tucked away from the busier Omiš streets for a homestyle dining experience.

La Fabbrica is a Napoletana pizza dream located in an old pasta factory. The intimate ambiance allows guests to casually imbibe with Adriatic views from its sea-facing terrace. The perfect outing for those looking for a quick and quality eatery, La Fabbrica also offers craft beers, burgers, and tasty cocktails!

Located in a cobblestoned old town square, Cocopazza takes Dalmatian cuisine to the next level. From prawn risotto to octopus dishes, fresh pasta to homemade cakes, and steaks to pizzas, Cocopazzo has a taste of everything. And if you’re an early riser, they even serve breakfast!

Tasting house Arsana is one of the more unique establishments in Omiš, creating three daily tasting menus based on meat, fish, and vegan dishes, with wine pairings for each course. Inspired by the pirate tradition in the town, Arsana enhances homestyle Dalmatian classics, like octopus goulash, prawns and polenta, and gregada for one of the most memorable culinary experiences on your sailing holiday. 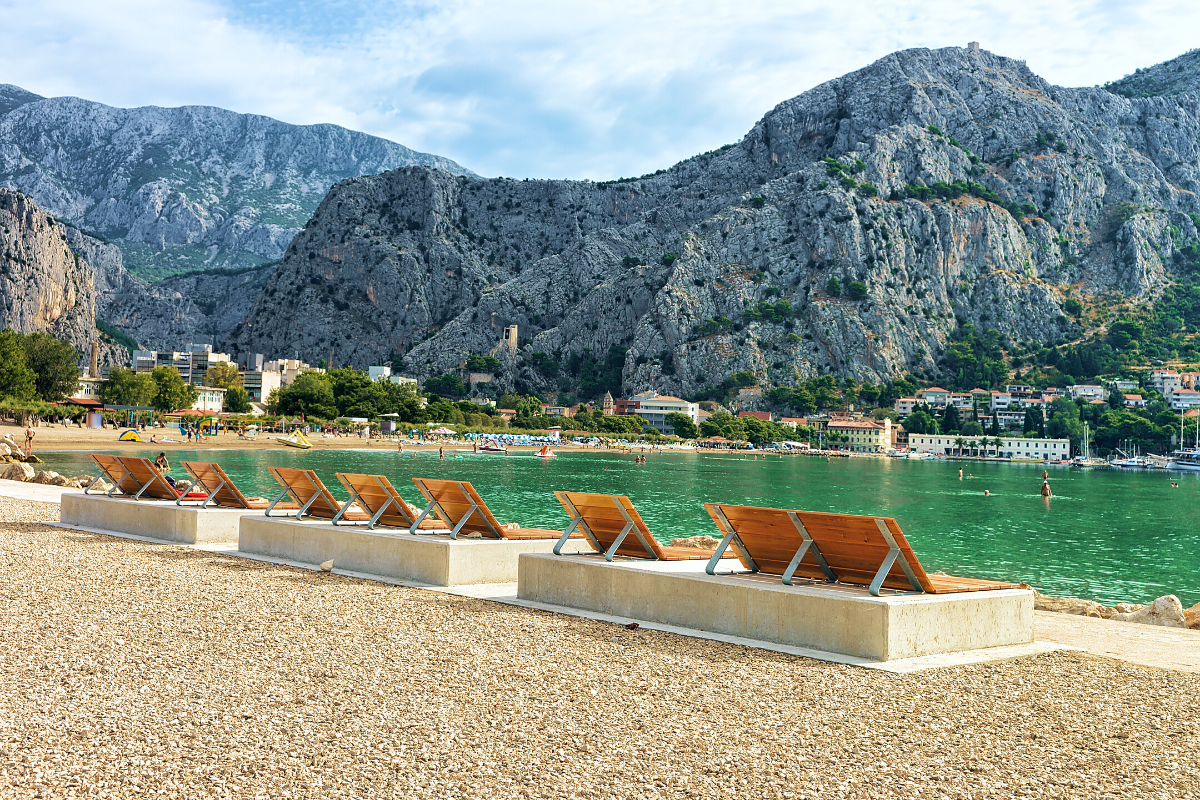 Did you know that the Omiš Riviera is 20 kilometers long? Here are some of our favorites.

Velika Plaža is indeed the most popular beach in Omiš, and it makes sense when its name pays tribute to its size (‘velika’ meaning ‘large’). Just minutes away from the historic old town, Velika Plaža measures 700 meters long, with plenty of beach day activities from water sports to volleyball. Velika Plaža is also an excellent getaway for the family, thanks to its shallow shore and many amenities on offer.

About 15 mins away from the city center is Brzet, a 400-meter-long pebbled beach shaded by dense pines. Known as one of the most beautiful beaches in the Omiš area, Brzet offers breathtaking panoramic views and a handful of restaurants and cafes where you can recharge!

Just a short drive from the center of Omiš is Duće, a small village on the sea with a stunning beachfront. But what makes Duće really stand out is Shooko Beach Bar, located on the only sandy beach in the Omiš Riviera! With after beach parties, concerts, and a food & beverage menu, Duće is a fantastic beach day outing just outside of the Omiš old town. 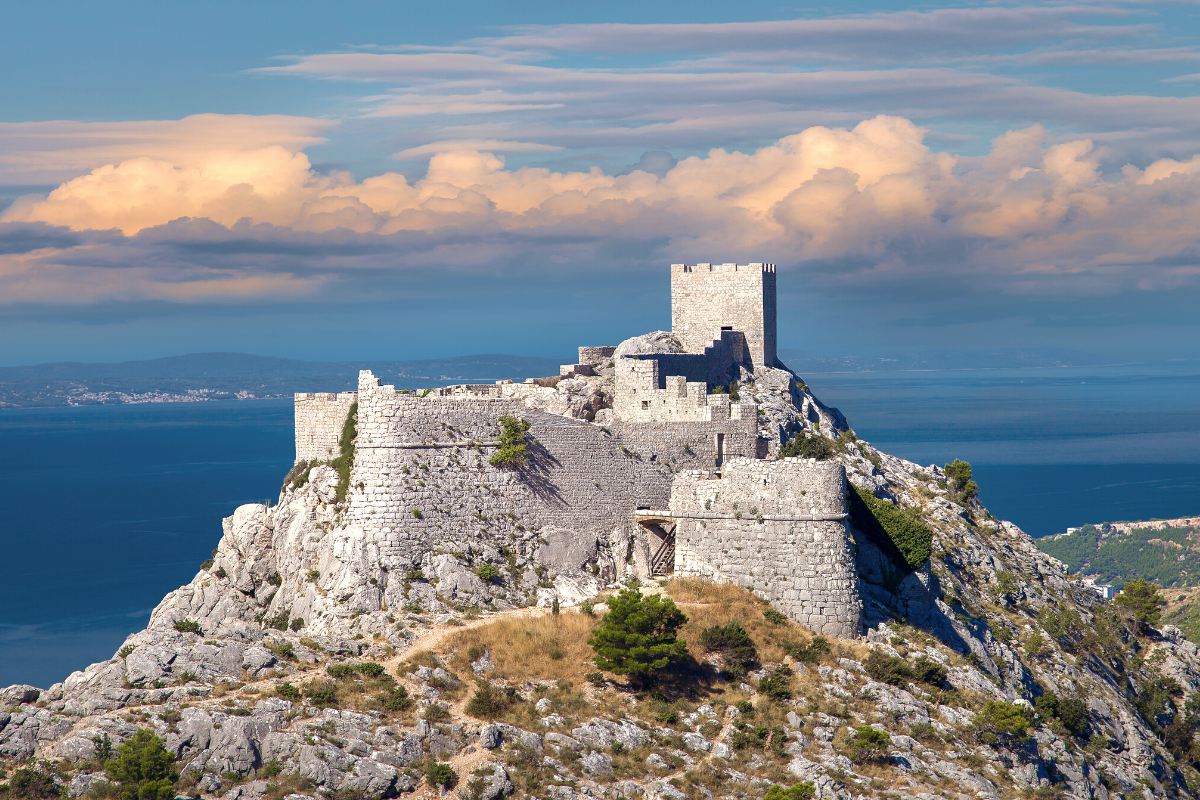 This 13th-century fortress perches 200 meters above the town and can be visited if you’re ready to take on a steep staircase. A 4-story fortress with a lookout point that stretches from the Omiš old town to the Brač Channel and the nearby Duće, Mirabella was once used as a refuge for Omiš pirates and is one of the city’s most famous symbols today!

About an hour-long hike from Omiš is the Starigrad (or Fortica) fortress, built in the 15th century during Venetian rule to protect from the threat of the Ottomans. Accessible only by a rocky hiking trail, this fortress rewards with priceless 360° views from its high cliffs.

One of the best attractions in the Omiš area is the Mila Gojsalić statue, created by renowned Croatian sculpturist Ivan Meštrović. A Croatian heroine known for taking down the Ottoman army, this tribute to Mila Gojsalić is located about five or so kilometers from the town of Omiš, up a winding road with breathtaking views of the canyon! 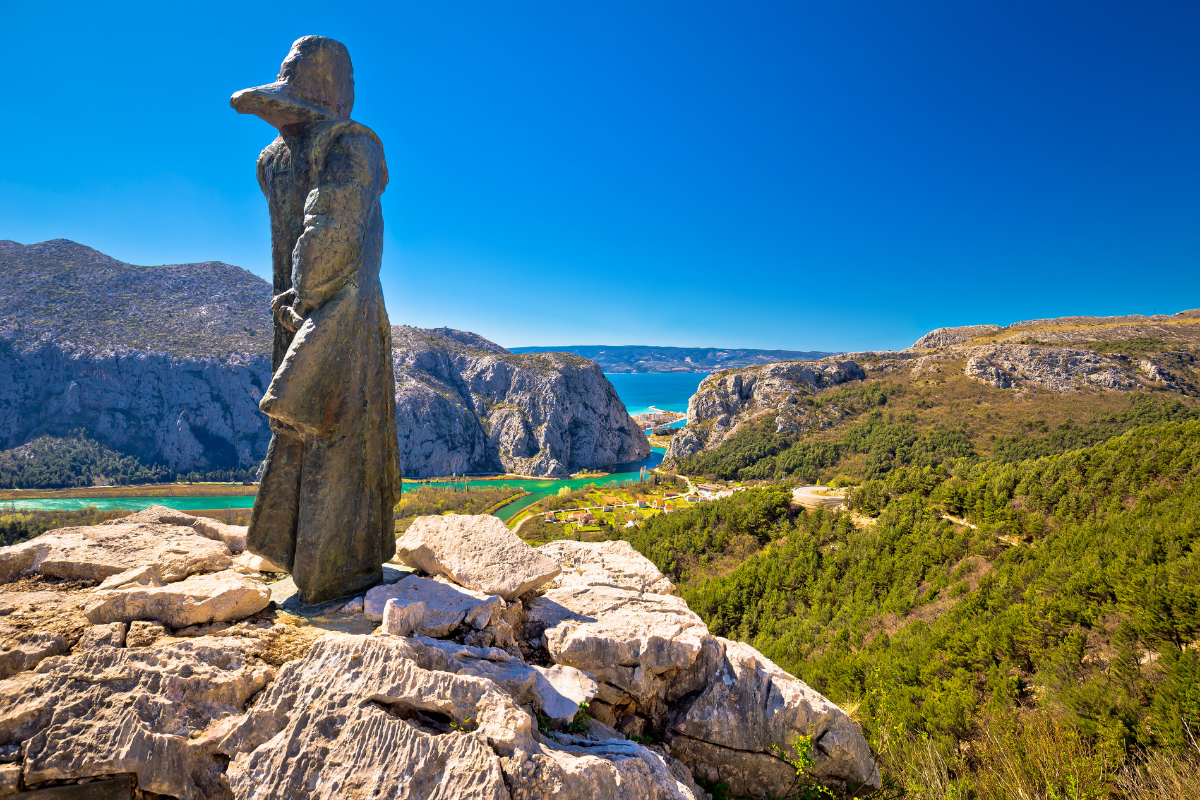 Speaking of the Cetina River Canyon, there is no better way to explore it than by canyoning! Cetina’s natural beauty is best shown by its canyon landscape at a depth of 150 meters, where you can cliff jump into natural pools and swim through rapids!

And for the real adrenaline junkies - ziplining! Located 3 kilometers from Omiš, zipliners can speed up to 65 km an hour on eight wires (the longest 700 meters) that are 150 meters above the ground!