Just 14.5 nautical miles and about 27 kilometers from Dubrovnik is the magical Mljet, the southernmost of the largest Adriatic islands which runs parallel to the eastern half of the Pelješac peninsula. Stretching an impressive 100 sqm, Mljet is honored as Croatia’s ‘green island’, and not without good reason - over two-thirds of the island is carpeted by dense forest, the northwestern half of which has been named a national park! But we will get more into that later.

Famous for its precious natural heritage, like historic sea caves and pristine bays, aleppo pine and holm oak forests, saltwater lakes, limestone and dolomite cliffs, and karst valleys, Mljet is pure paradise and one of Mother Nature’s finest creations. With its highest point reaching 514 meters tall and a rugged coastline that continues to surprise thanks to concealed coves, imperceivable islets, and radiant reefs, Mljet is a sanctuary for sailors and a must-see on every Croatian sailing holiday. 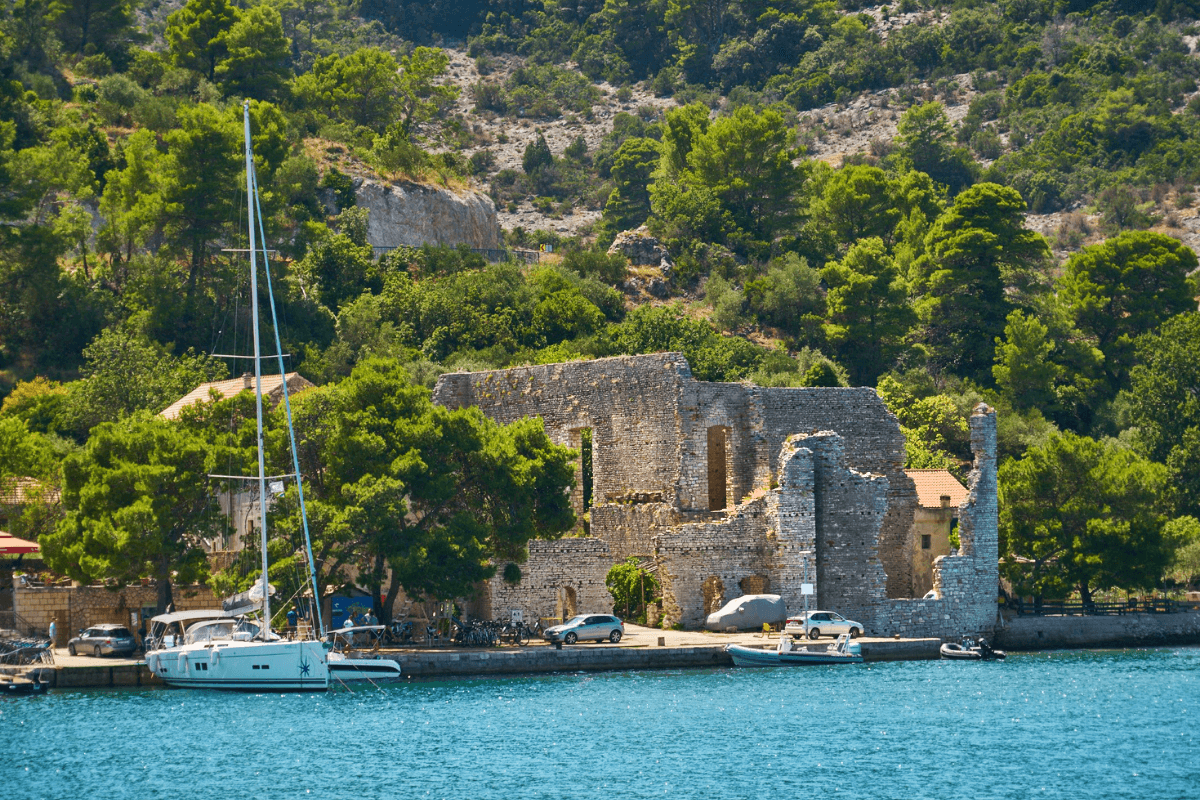 Literature buffs may already be familiar with Mljet as it played the island of Ogygia in Homer’s Odyssey, where the nymph Calypso kept the hero Odysseus captive for seven years. But even outside of Homer’s epic, Mljet still boasts impressive roots.

Mljet’s first inhabitants were the Ardiaei, an Illyrian tribe who traveled through the Prapratno port on the Pelješac peninsula some 4000 years ago.

However, the first historical records of Mljet trace back to the Greeks in the 4th century BC, confirmed by various Greek amphora and shipwrecks along the island’s coast, particularly in Okuklje, Sobra, and Polače. Mljet was seen as a sanctuary for Greek sailors escaping adverse weather when traveling to the nearby islands of Vis, Hvar, and Korcula.

As the Romans began to rule the region, it was inevitable they too would take control of Mljet, which was under their rule from 167 BC. However, the trace of the Roman Empire was mostly limited to a defensive 3rd-century palace built for the Roman governor of the territory.

It is interesting to note that the Neretvans traveled to Mljet from Pelješac and built the first Slavic settlement on the island called Vrhmljeće, above the present village Maranovići.

The 12th century welcomed the arrival of Benedictine monks from Puglia, who quickly established a feudal government, largely improved the island’s agriculture, and played a significant role in developing literacy on the island. A monastery on St Mary's island is a testament to their tracks today.

It wasn’t long before Dubrovnik’s rule expanded to Mljet, which was fully controlled by the  Republic in 1410 and remained so until 1808.

The fall of the Dubrovnik Republic welcomed a brief stint by Napoleon before the Austro-Hungarian Monarchy gained control, hugely developing infrastructure and a thorough sustainable development policy. Mljet became part of Yugoslavia in 1918 and Croatia after the country declared independence in 1991.

Each historic period permeates the island through relics, fortifications, Illyrian tombs, and Roman edifices, all of which pay tribute to the island’s vibrant past. 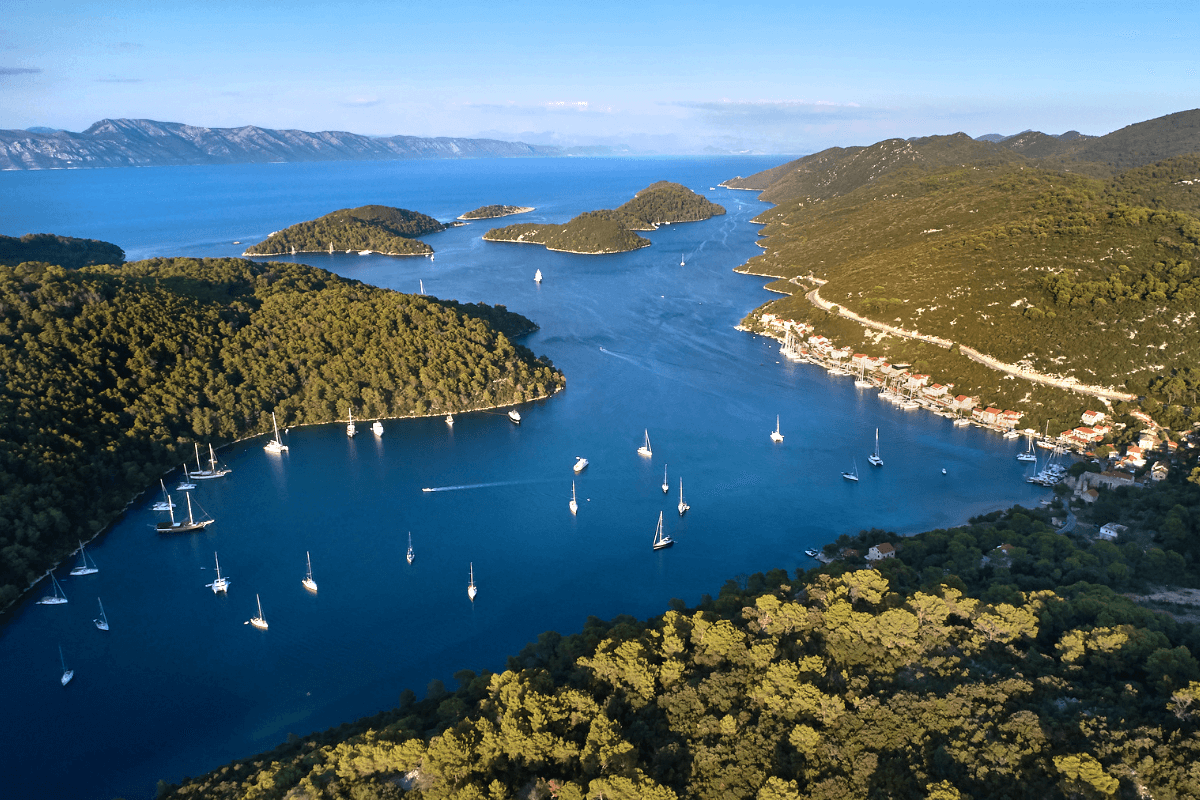 When sailing Mljet, you may notice that there are no marinas on the island, but several anchorages and small harbors primarily dominated by restaurant moorings, which compensate for any lost infrastructure.

Two harbors are most popular for sailing enthusiasts - Polače and Pomena.

Polače is situated in the northwest end of the island and is known as one of the best-sheltered harbors in the Adriatic. Located within the national park in a protected bay, Polače is also one of the official entrances to the National Park.

If your sailing group wants to eat ashore, you’ll want to head to the southern side of the bay, where there are many restaurant moorings, though beware that Mljet is no stranger to busy summer sailing crowds. Polače may not have many amenities, but visitors will find several restaurants, bakeries, and grocery shops should your sailboat need a stock up.

Pomena lies on the northwest coast of the island and is protected by the small island of Pomestak and is another easy way to visit Mljet National Park. Pomena’s secluded wooded setting means that it is not as developed as Polače, with fewer amenities for sailing guests. Should you wish to explore the area, you’ll find Hotel Odisej, a campsite, and day-trip boats from Korcula. And should if the easterly wind hits during your sailing trip, you’ll want to choose Pomena over Polače to stay safe!

Where to eat & drink? 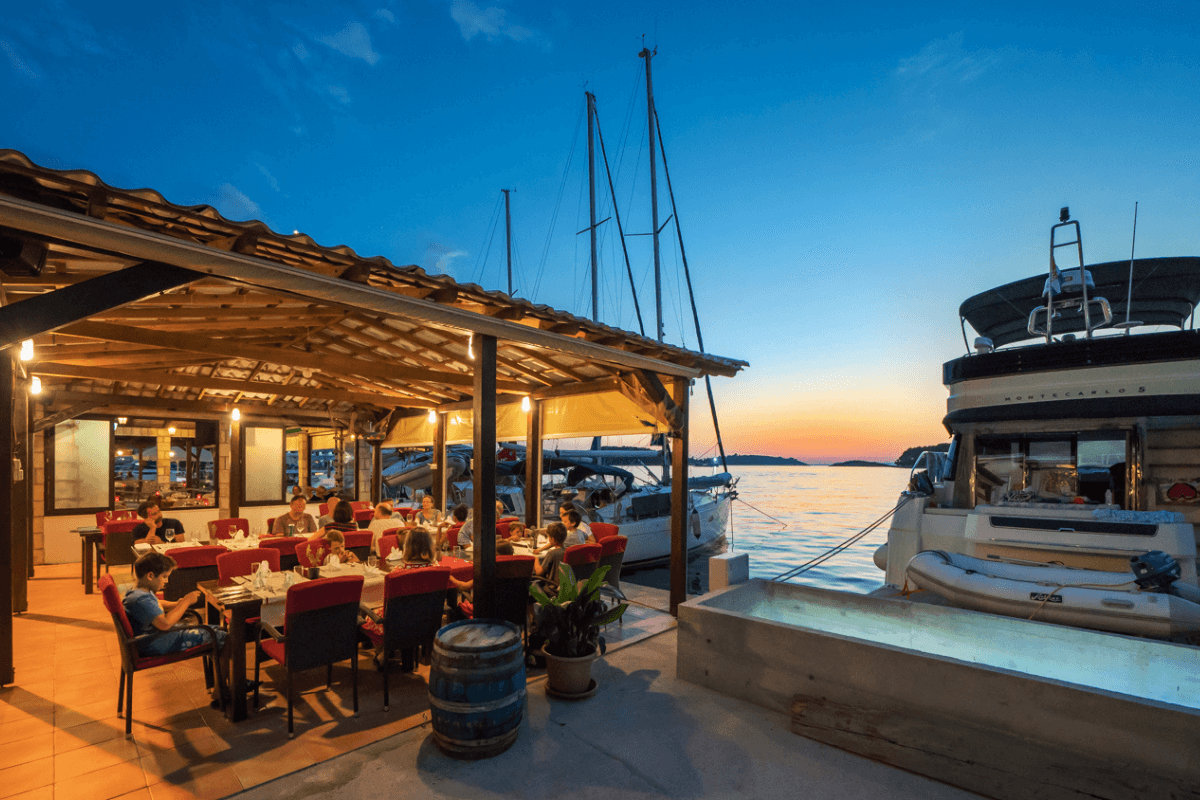 While Mljet is a no-frills island that wows thanks to its bare bones, some culinary wonders add to its natural awe. Most popular is Restaurant Maestral in Okuklje, where supreme seafood and stunning seascapes are in the spotlight.

Konoba Ribar in Pomena is praised for its homemade pasta, stellar sunsets, and local specialities like black risotto. However, Restaurant Stermasi in Saplunara is second-to-none, owned by the diligent Stermasi family that favors experience and quality over mass tourism menus.

Mljet isn’t mainly known for having much nightlife, but there are some lively local hangouts where you can unwind with a cocktail or two. Komarac, for example, transforms from daytime coffee orders to chilled cocktails in the evening, bringing a bustling ambiance to the rather sleepy town of Babino Polje in the summer months. 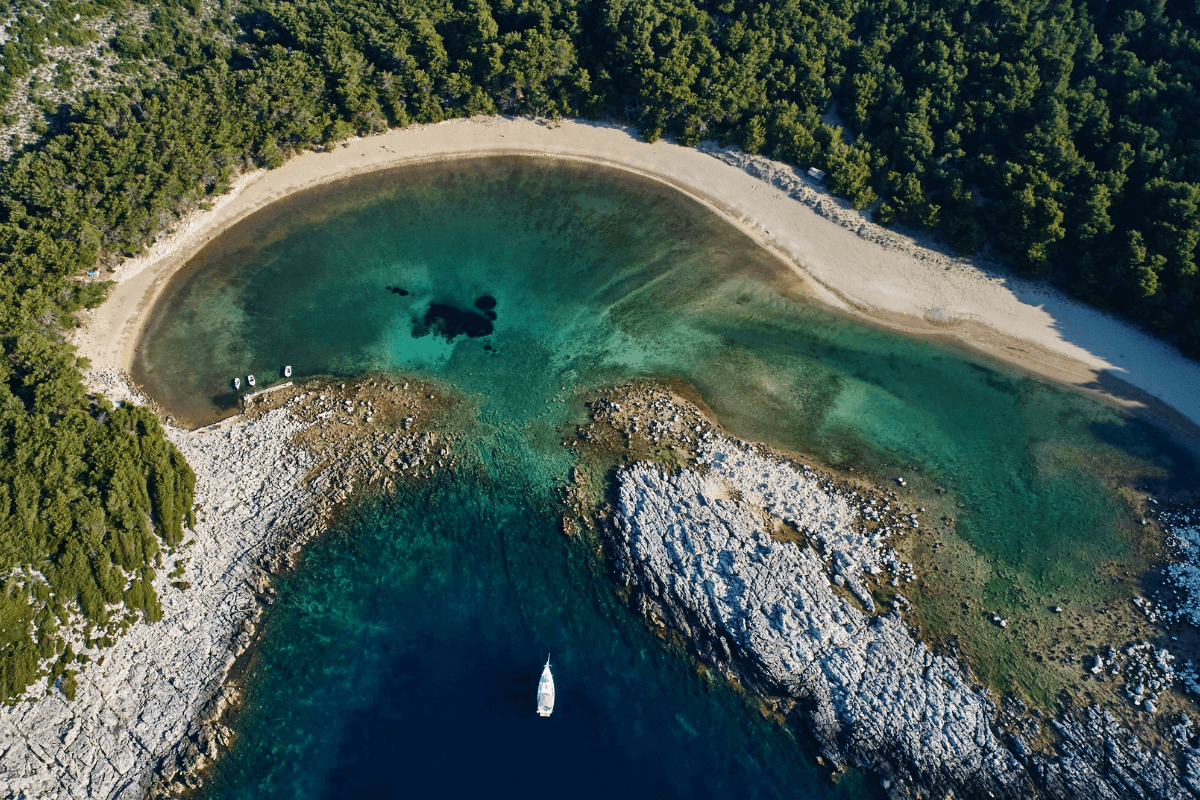 Mljet is no stranger to stunning beaches, which add to its appeal for all sailing holiday guests. Saplunara sits on the southeastern part of the island, named after the Latin word for sand which pays tribute to its white sandy beachfront. The 1-kilometer-long Saplunara cove is split into two beaches - large and small Saplunara. Shaded by dense pine forest, Saplunara doesn’t boast many amenities, adding to its allure as one of Mljet’s pearls.

Not far from Saplunara in Limuni Bay is Blace, a protected sandy beach with shallow waters, making it an excellent outing for families. A relatively hidden oasis without the tracks of tourists, Blace has made its name as a popular filming location for international and Croatian reality shows!

And if you’re looking for something with a bit more… action? We’ve already mentioned that Polače is the largest and safest bay on the island, which makes it a promised land for sailors. But the village itself also offers a bit more than beaches off the beaten path. The village itself is home to around 100 people, who live amongst ancient ruins from the 1st to 6th centuries. The town has a central sandy beach with restaurants and refreshments never too far away from your beach day.

Pro tip: Make time to check out Sutmiholjska, an undiscovered pebbled beach with views of the Italian coast! 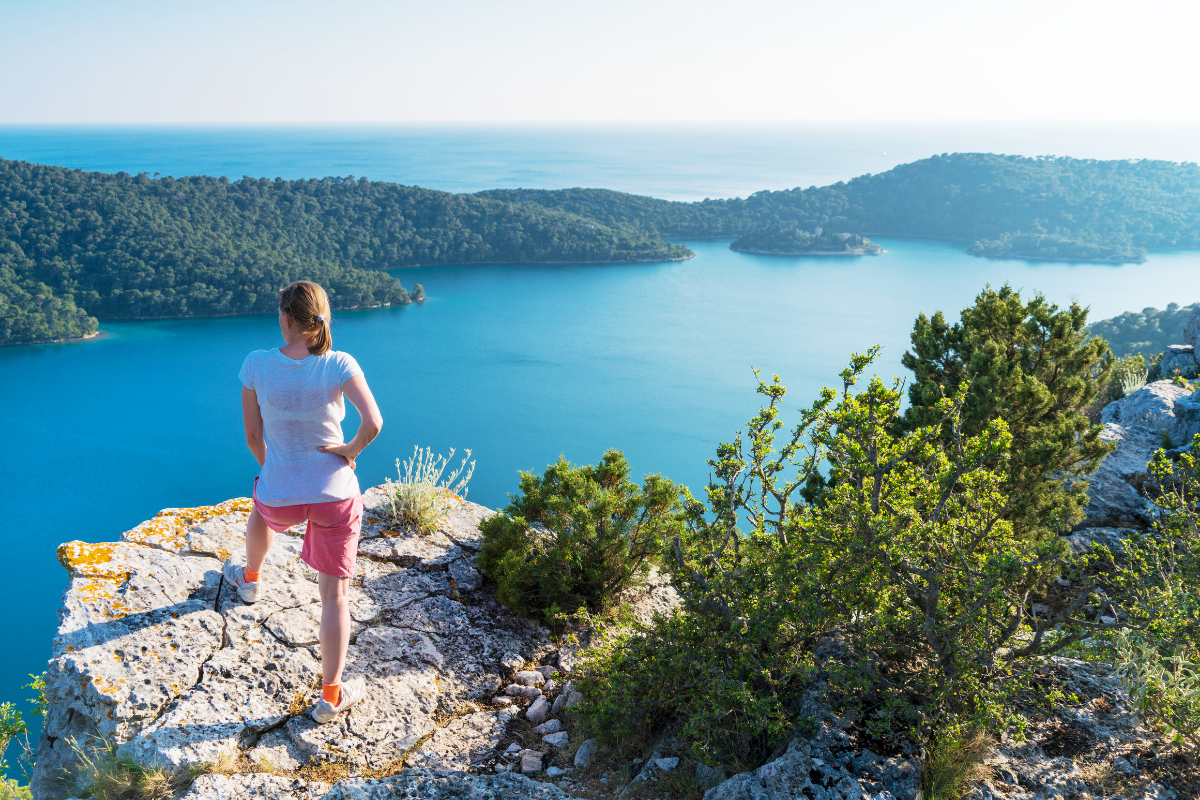 Extending 5,375 hectares, Mljet National Park is mainly known for its saltwater lakes, Veliko and Malo Jezero, and the Benedictine monastery on St. Mary’s Island. Visitors can also explore Illyrian fortifications and tombs and a Roman Palace - the largest after Diocletian’s Palace in Split and the Pula Arena!

Perhaps most popular is the Odysseus Cave, an ode to Homer's shipwrecked hero and nymph Calypso, who held him hostage in this very cave for seven years. Located on the southern part of the island, this geomorphological phenomenon is best explored by swimming in. The best time to visit is midday, as the karst pit transforms into an aquamarine world when the sunlit hits just right.

Mljet is also a wonderland for travelers looking for a bit of adventure, with many hiking and cycling trails on the island to uncover. And should you wish to stay afloat? Why not partake in kayaking around the saltwater lakes!

Diving enthusiasts will take pride in knowing that famous French oceanographer Jacques Cousteau once revealed that Mljet boasts some of the cleanest seawater in the world. And you’ll even be greeted by colorful coral reefs!

While Mljet may not have the bustling crowds or five-star amenities of other Croatian islands, its unparalleled natural heritage and cultural charms enhance its allure. It is no wonder why Mljet has become a must-see destination on every Croatian sailing vacation.