While the wildly popular HBO series ended in 2019, Game of Thrones undoubtedly left its mark after nearly a decade on our television screens - and Croatia is lucky to benefit from the buzz.

George R.R. Martin's fantasy drama series took place on fictional continents, which required whimsical locations to imitate the dark and dreamy medieval story plot. Though you may not jump to Croatia’s stunning and sunny seascapes to emulate precisely what Martin had in mind, its ancient architecture and magical scenery played a pertinent part in portraying some of the series’ defining moments.

It’s not difficult for you to visit any of these filming locations today, even after the show came to a close two years ago. Better yet - most of these spots are already on your Croatian sailing route.

Game of Thrones fans who begin their sailing holiday in Split will be happy to learn there are a few locations worth visiting. 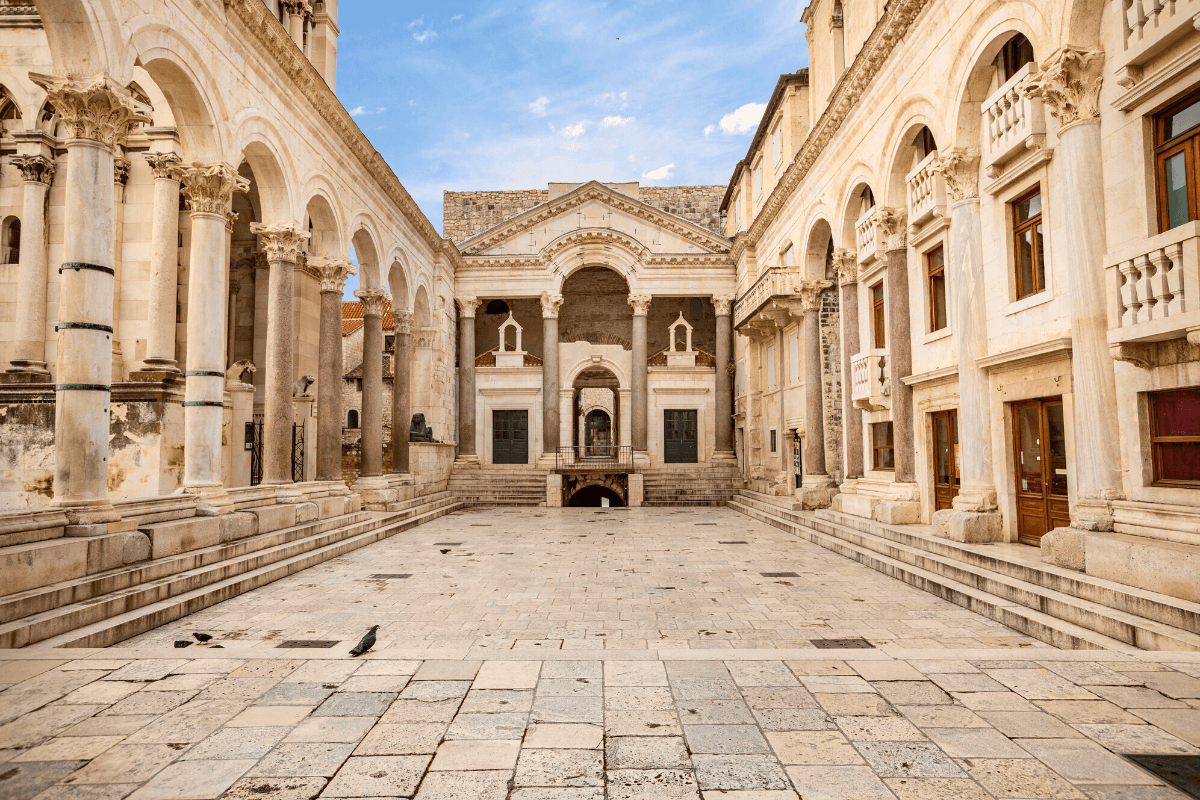 Split’s most popular attraction is undoubtedly the 1700-year-old Diocletian’s Palace, a UNESCO-protected architectural jewel that is the focal point of the city’s old town. Local life thrives around this Roman emperor’s retirement residence, enveloped by boutiques, bustling bars and restaurants tucked into tiny alleyways. Game of Thrones used Diocletian’s palace and its cellars to showcase fan favorite Daenerys and her throne room where she trains her three dragons. Later in the series, the cellars were also used as the home to Meereenese slaves. 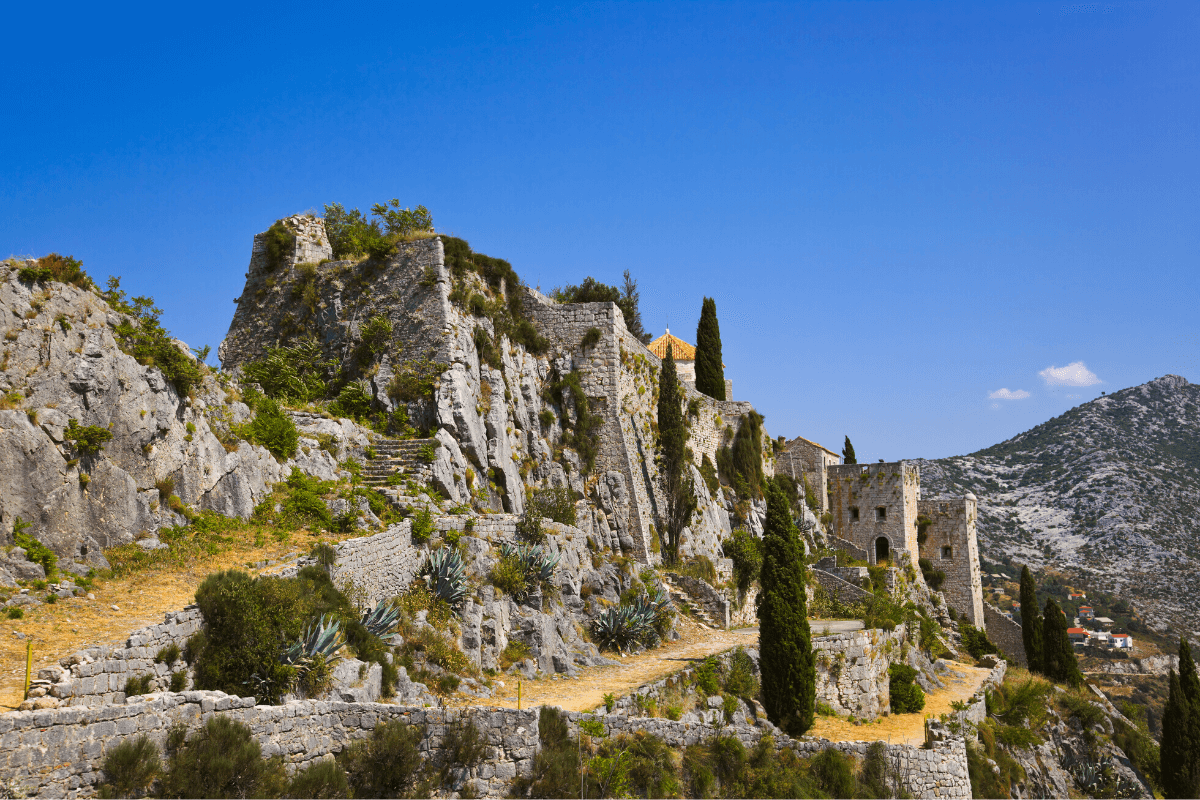 Just a short drive outside of Split is the tiny town of Klis, which boasts an imposing 9th-century hilltop fortress with sweeping views of the Adriatic Sea. It comes as no surprise, then, that this fortress became a foolproof location for the popular TV series, and precisely to depict the city of Meereen. One of the series’ most memorable scenes comes from this exact location when Khaleesi seizes the city and punishes the Meereen rulers by nailing them to crosses.

Another 20-minute drive inland from Split is Žrnovnica, a small settlement known chiefly for grain mills. Today, however, Žrnovnica attracts visitors due to its watermill, where Daenerys's handmaiden and interpreter Missandei is filmed bathing. But that’s not all. The Žrnovnica quarry was also the backdrop for the famous Season 4 scene ​​where the Unsullied battled for Daenerys, and Daario Naharis killed the city champion. 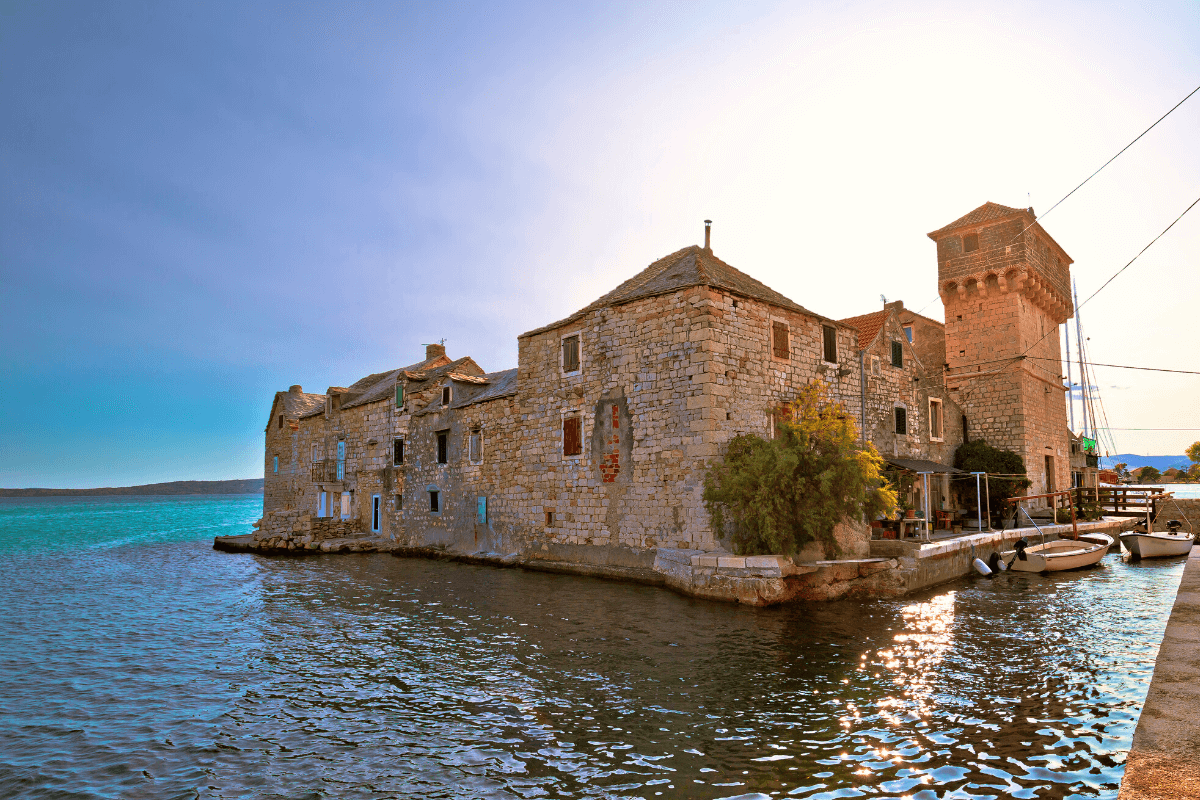 Pro tip: If your boat charter leaves from Kaštela, head to Kaštel Gomilica to explore the free City of Braavos!

The real Game of Thrones fanfare is held in Dubrovnik, with several locations you can visit along the Adriatic and in the famous city’s Old Town. 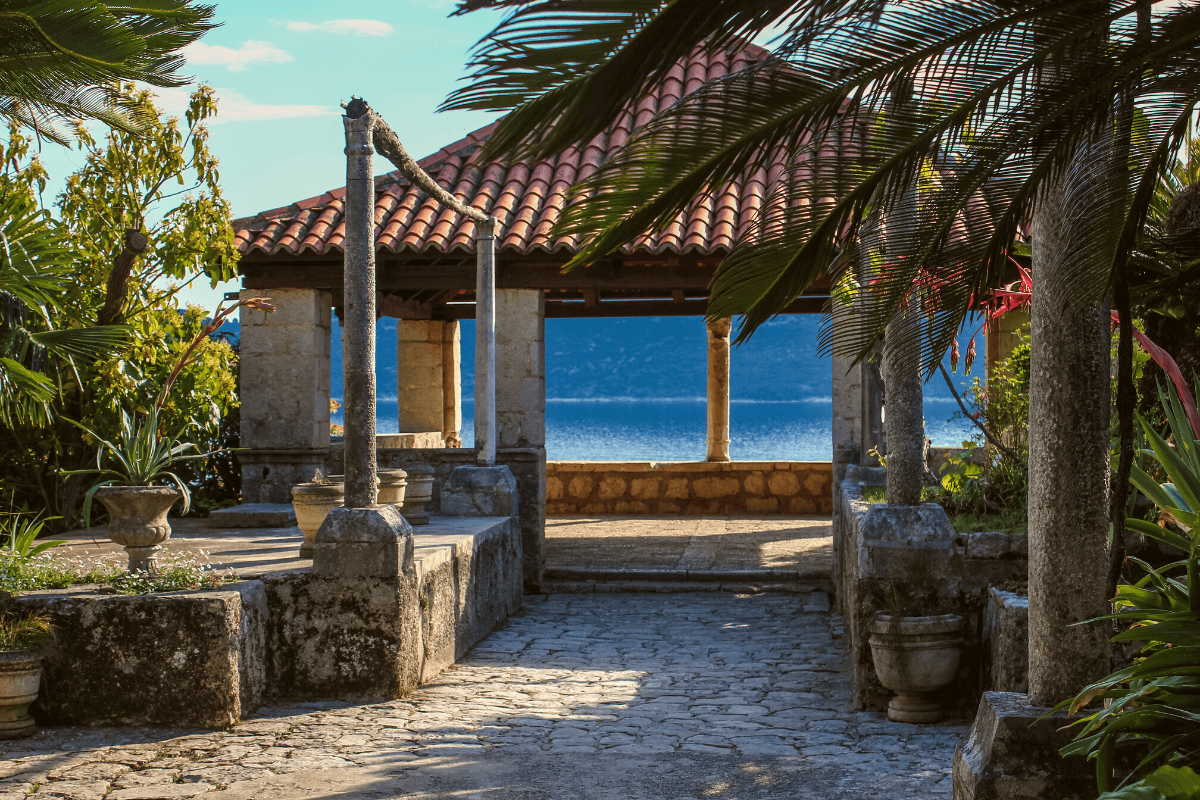 This 15-century summer residence is one of the oldest arboretums in the entire region. Just a 20-minute drive north of Dubrovnik, Trsteno spans 25 hectares and is a Gothic-Renaissance dream, fit with an aqueduct, mill, fountains, and pavilion with views onto the Adriatic Sea. Trsteno acts as the King’s Landing palace gardens which play host to a few crucial scenes in Season 3. Sansa Stark reveals King Joffrey’s secrets at Trsteno, and Lord Varys and Lady Olenna discuss Sansa Stark’s wellbeing. 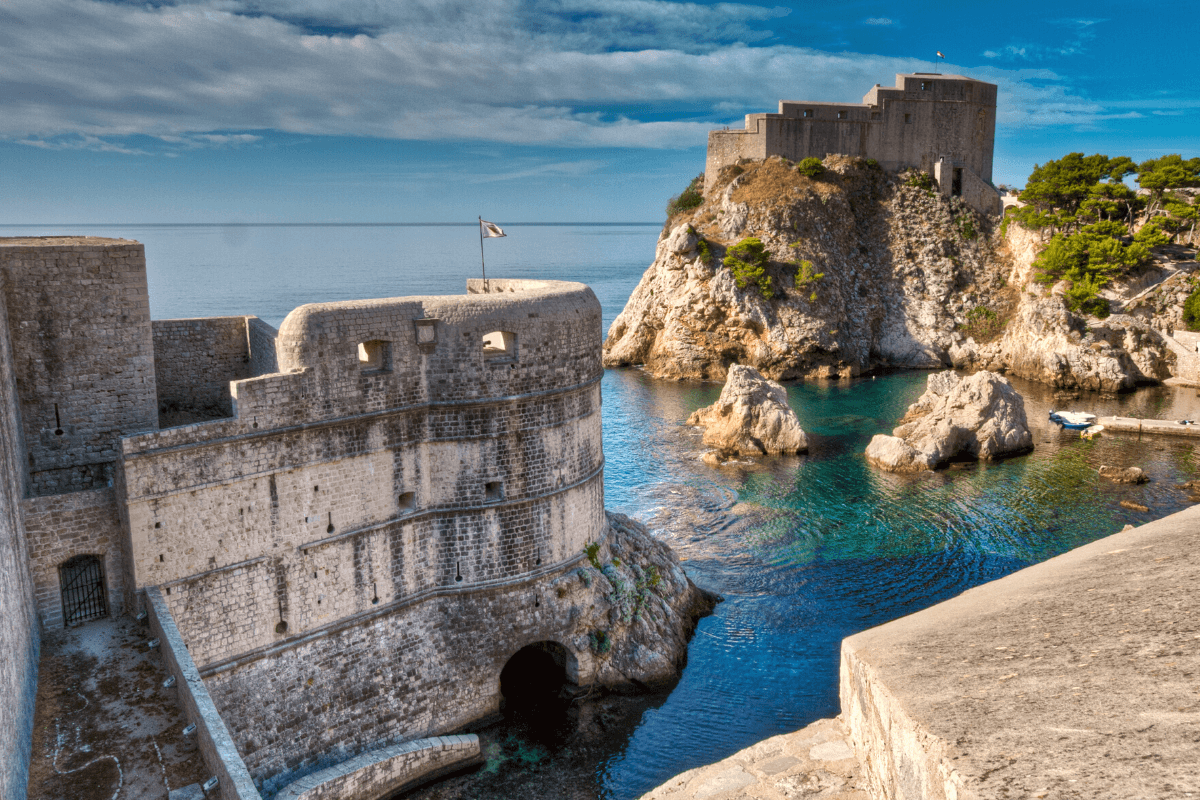 Arguably the most famous film set in the series is King’s Landing, the stronghold of the Lannister family, which has brought incredible acclaim to the already popular Dubrovnik old town. Dubrovnik’s historic core and outer walls were repeatedly spotted in the series, and even today, some believe that Dubrovnik’s old town was created especially for the TV show. With architecture this magical, we can see why they’d be easily fooled.

Because King’s Landing was such a powerful part of this plot, it’s best to break it down by the individual locations and their most memorable scenes. 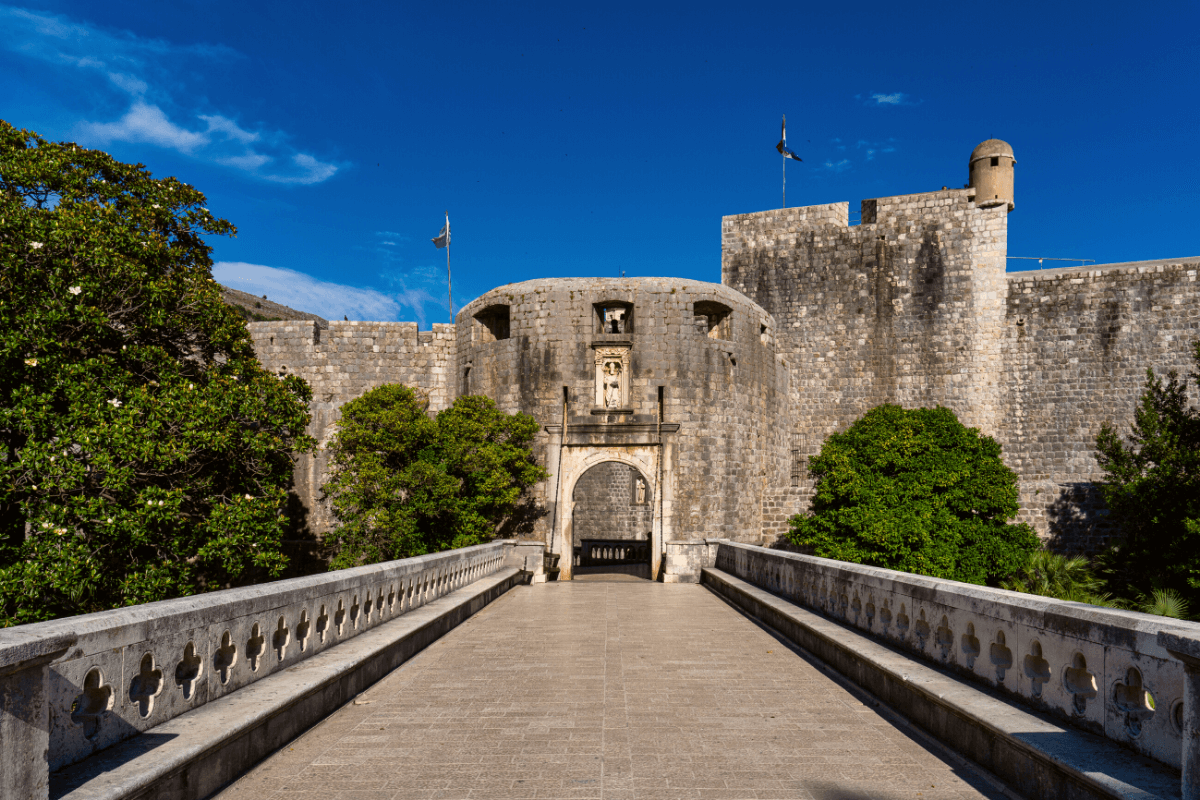 The main entrance to the Old Town is the famous 15th-century Pile Gate, located on the city’s western side. Depicted as Blackwater Bay in Game of Thrones, you’ll likely recognize Pile as the backdrop to the Season 3 episode when Sansa Stark and Lord Baelish plan their escape after King Joffrey’s death. 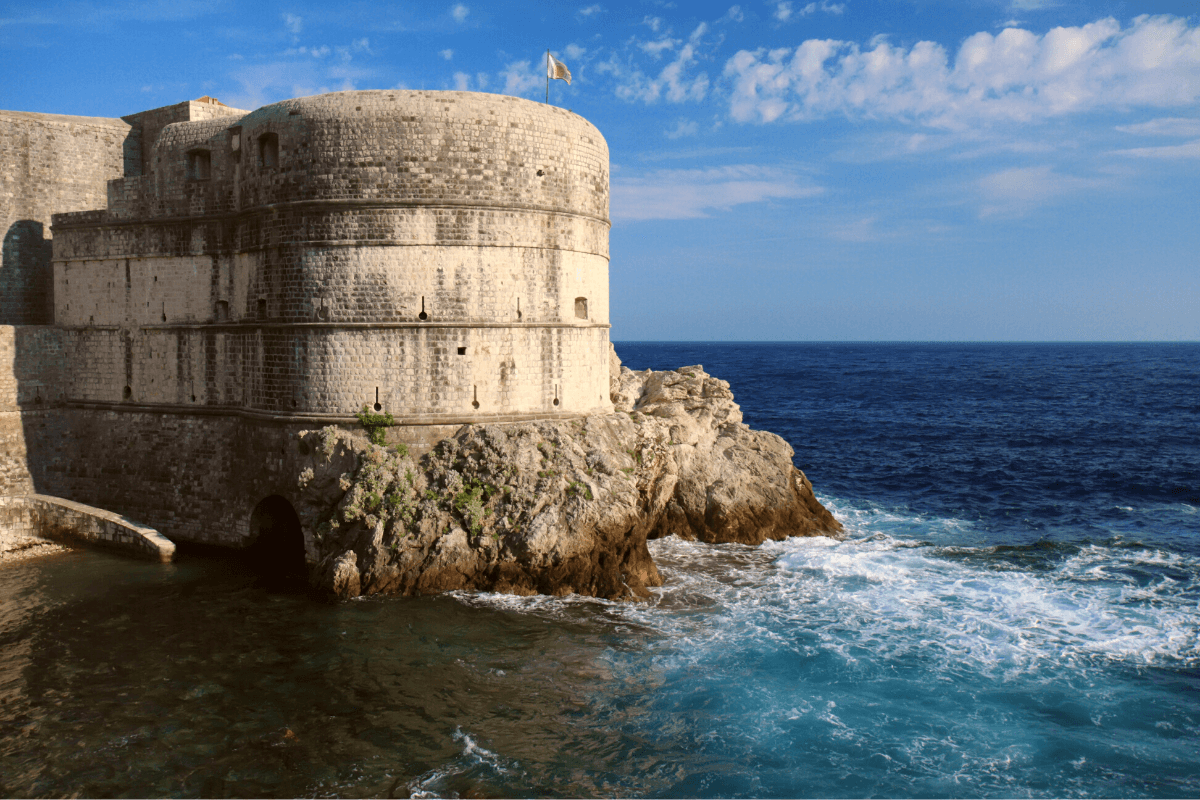 Set above Pile Gate is Bokar Fortress, one of the trademark defense towers in Dubrovnik. This 15th century fortress was built by Italian architect Michelozzo di Bartolomeo to defend the famous gate below. Bokar was used as the setting for a Season 2 conversation when Tyrion and Lord Varys discuss defending King’s Landing, though an even more key moment came in Season 8 when Daenerys decides to burn the city to the ground. 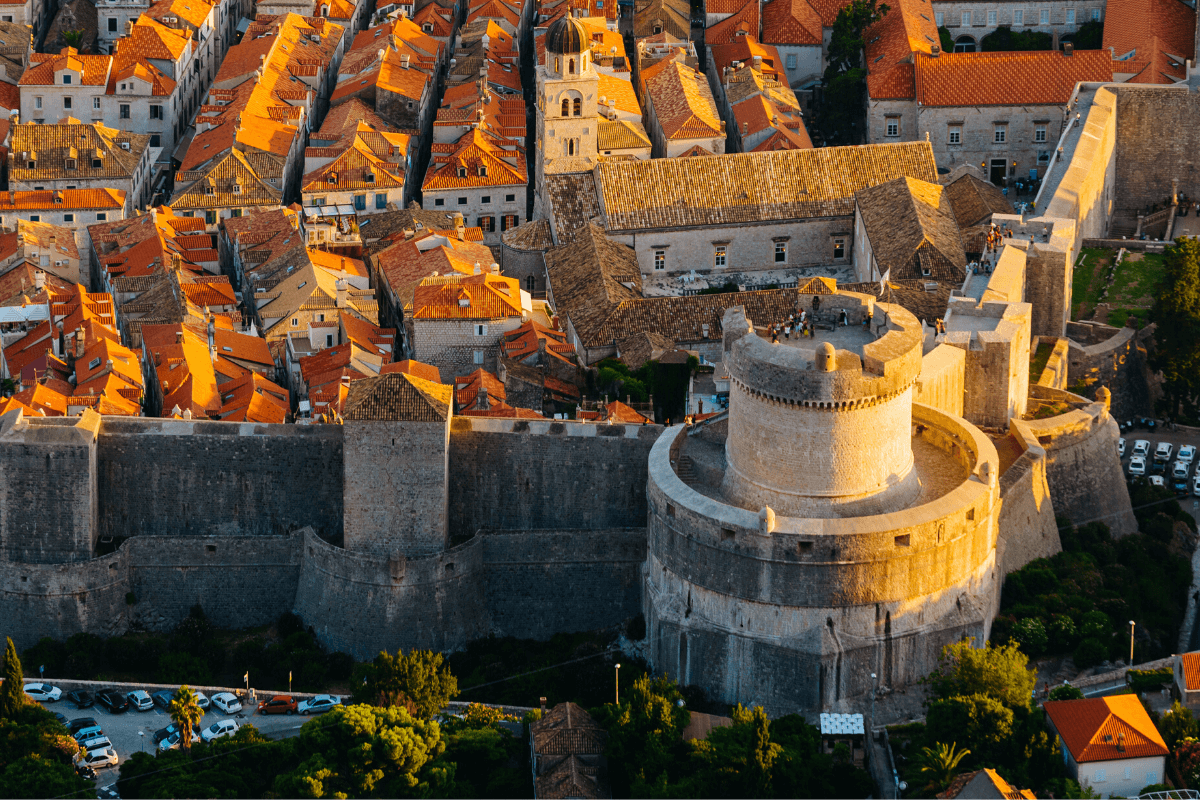 Dubrovnik old town’s highest point acted as the outer walls of the House of the Undying. You may remember this iconic defense tower when Daenerys and Jorah Mormont try to enter the House so Daenerys can retrieve her stolen dragons. 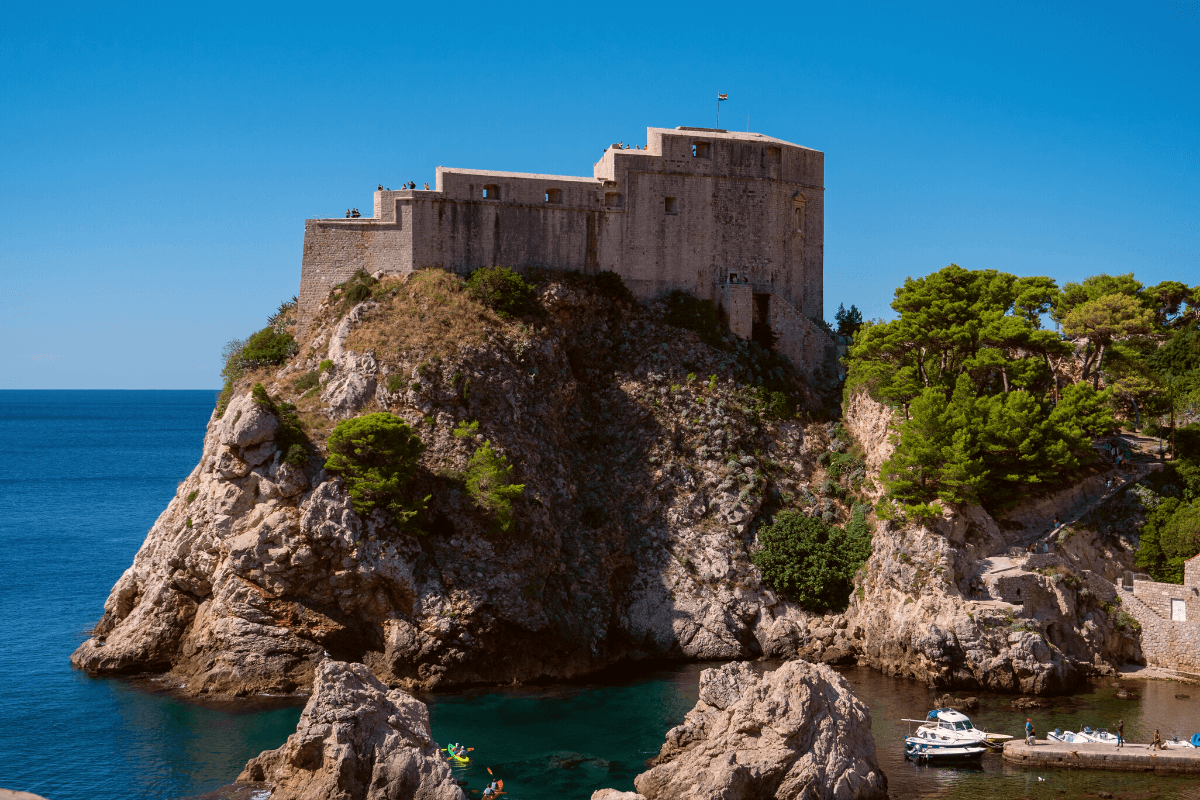 The 37-meter high Lovrijenac Fortress was built in the 16th century to protect Dubrovnik from a Venetian invasion and ultimately played a crucial part in preventing Dubrovnik from being seized. Its 4-12 meter thick walls give insight into just how serious Lovrijenac was about protecting the Adriatic Pearl. This fortress was used in the series to show the tournament dedicated to King Joffrey. 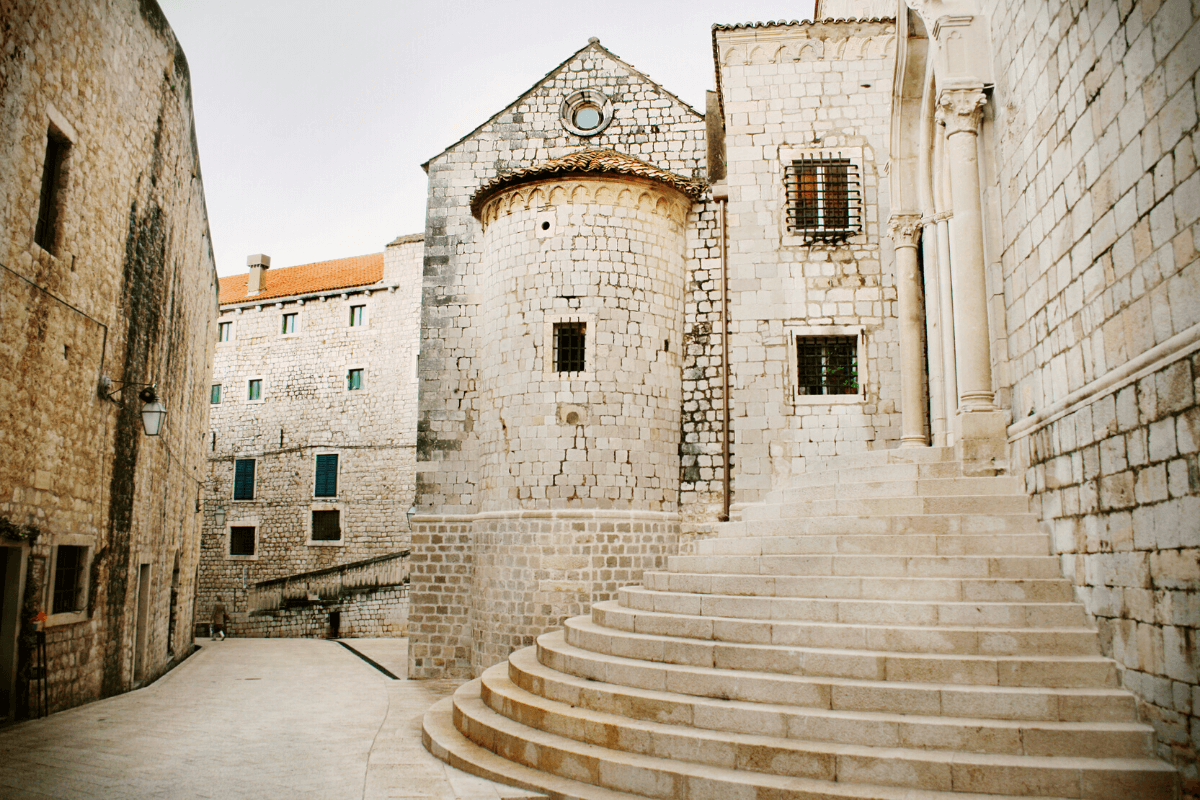 Near another famous Dubrovnik gate (Ploče) is the St. Dominic Street staircase, which is iconic for many reasons in Game of Thrones. The striking stone staircase, surrounded by quaint houses, connects the Dominic Monastery with Ploče and Stradun, though you’ll remember it for when a naked Queen Cersei stepped down the stairs on her walk of shame. The street was also used to show the murders of King Robert Baratheon’s bastard sons by the Gold Cloaks.

This 16th century building was once a granary and today boasts over 6,000 ethnographic heritage objects from the Dubrovnik region, Croatia, and surrounding states. The building was depicted in Game of Thrones as a brothel where Tyrion Lannister and Oberyn Martell meet. 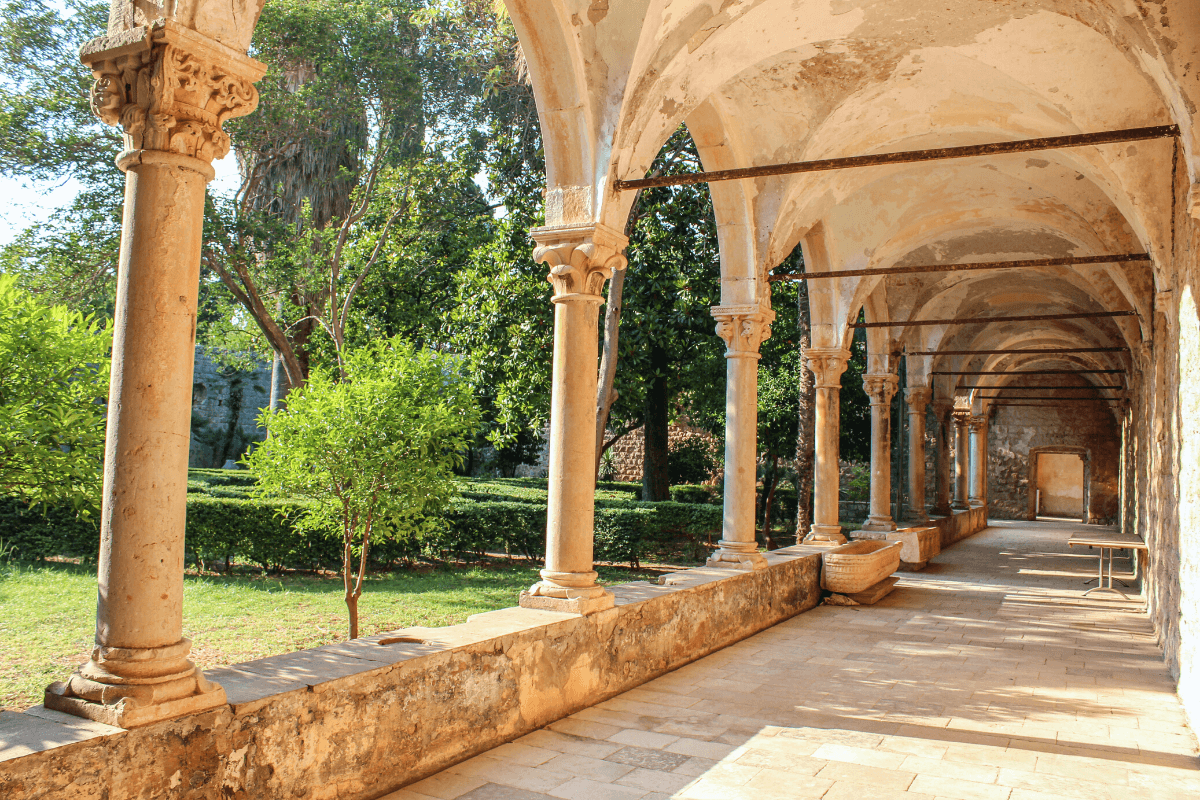 This island with roots dating back to 1023 is located just 600 meters off Dubrovnik. An easy day trip from the bustling Dubrovnik city walls, Lokrum serves visitors thanks to thriving flora and fauna and supreme swimming spots. Legend has it that Richard the Lion-Heart was actually shipwrecked on Lokrum in 1192 upon his return from the Crusades! Thanks to its history, it’s no surprise that Lokrum found its place in the Game of Thrones spotlight, acting as the city of Qarth, ruled by the ‘pureborn’. It was here that Daenerys was welcomed by the Spice King!