Located west of the captivating walls of Dubrovnik, you’ll encounter the enchanting Elaphiti, a group of islands that decorate Dubrovnik’s coast. Owing its name to the Ancient Greek word for ‘deer’ (elaphos), this archipelago abounds in ragged reefs, sharp cliffs, and breathtaking seascapes with some of the Adriatic’s most stunning settings.

Boasting a 90km² aquatorium and 30 km² of land area, the Elaphiti is composed of 13 islands - Olipa, Tajan, Jakljan, Šipan, Ruda, Lopud, Koločep, and Daksa accounting for the larger islands, and Sveti Andrija, Mišnjak, Kosmeč, Goleč and Crkvine for the smaller. To add to Elaphiti’s allure, the entire island archipelago is inhabited by only 850 people, guaranteeing serenity no matter the season. 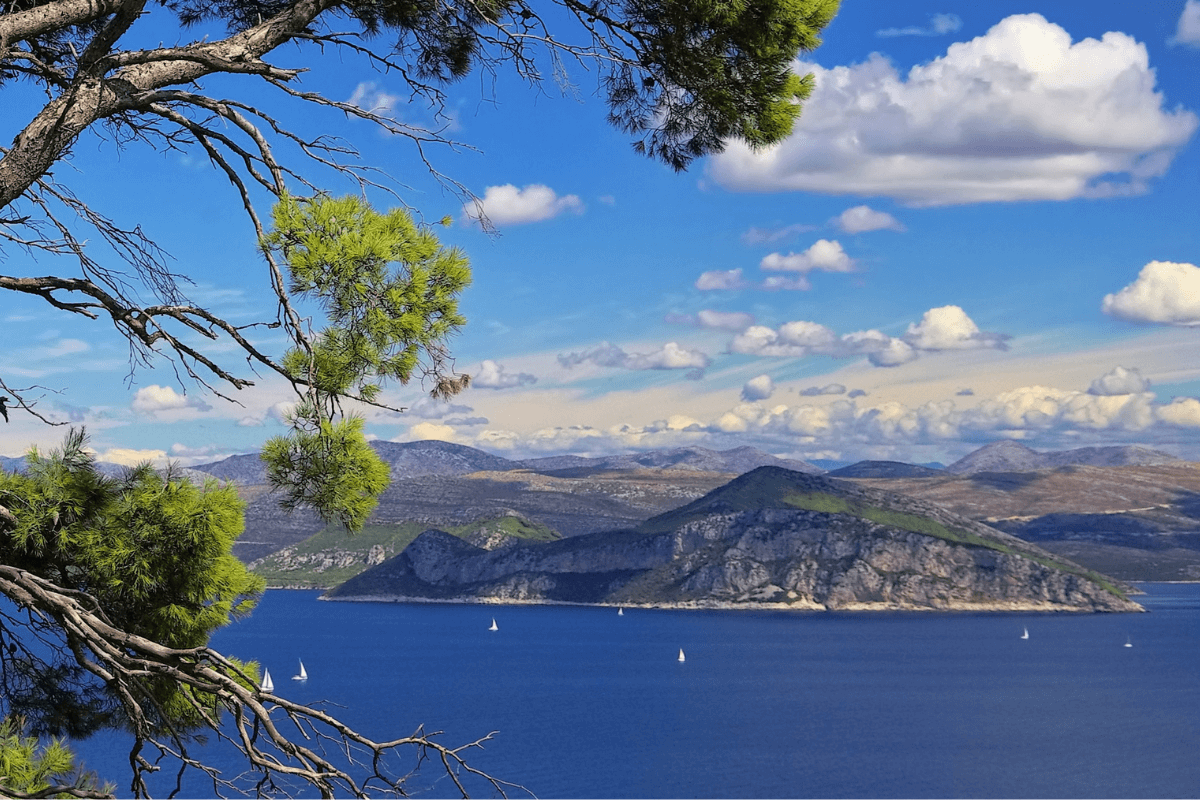 You may be wondering why this island archipelago was named after ‘deer’, and you’re not alone. The first mention of these islands by name was made in the 1st century by Roman author Pliny the Elder, who noted that several deer inhabited them in his work Naturalis Historia (or Natural History, the world’s first encyclopedia). While that has yet to be confirmed (or denied), it gives us a good look into Elaphiti’s vibrant history, which also saw the traces of Illyrians, Greeks, Romans, and Slavs.

While the Elaphiti Islands were part of the Dubrovnik Republic from 1272, it is interesting to note that the larger islands had their leaders, or rectors, and housed the rural residences of Dubrovnik’s nobles. The remnants of these regal residences can still be seen today.

Because the Elaphiti had little arable land, its residents were drawn to the sea and are known to be the most skilful mariners, with many becoming admirals and well-to-do shipowners throughout history. 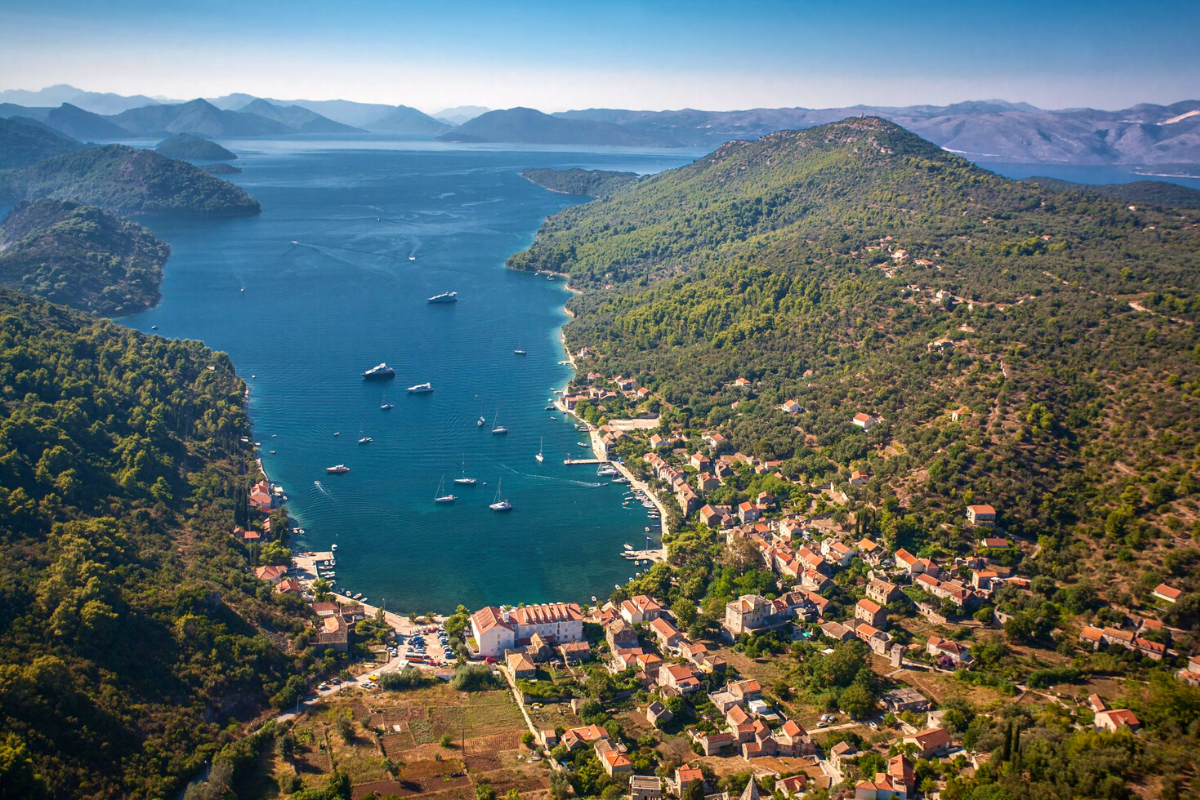 The three largest islands, Šipan, Lopud, and Koločep, are the most popular ports of the Elaphiti, and rightfully so. The only three inhabited islands of the archipelago are also directly connected by ferry boat from Dubrovnik, allowing tourists to escape the bustling walls for a taste of Elaphiti’s island flair.

Šipan, the largest of the Elaphiti islands, boasts two port villages - Suđurađ (a port located on the eastern part of the island) and Šipanska (situated to the west). Given that these two towns are the largest on the island, one can expect restaurants, cafes, and shops - and should you want to explore them both, they’re only 5 km apart on land. And consider yourself lucky, because Šipan is the only island that allows cars!

The second-largest of the Elaphiti Islands, Lopud, is located between Šipan and Koločep. The Lopud port is also found in the center of the main town, with many restaurants and cafes around and only a 10-minute walk to the Lafodia Sea Resort, one of the most unique 4-star hotels in the country.

The Koločep port is located on the northwestern side of the island, not far from the town’s center, allowing for facilities nearby, from restaurants and small shops to a post office. 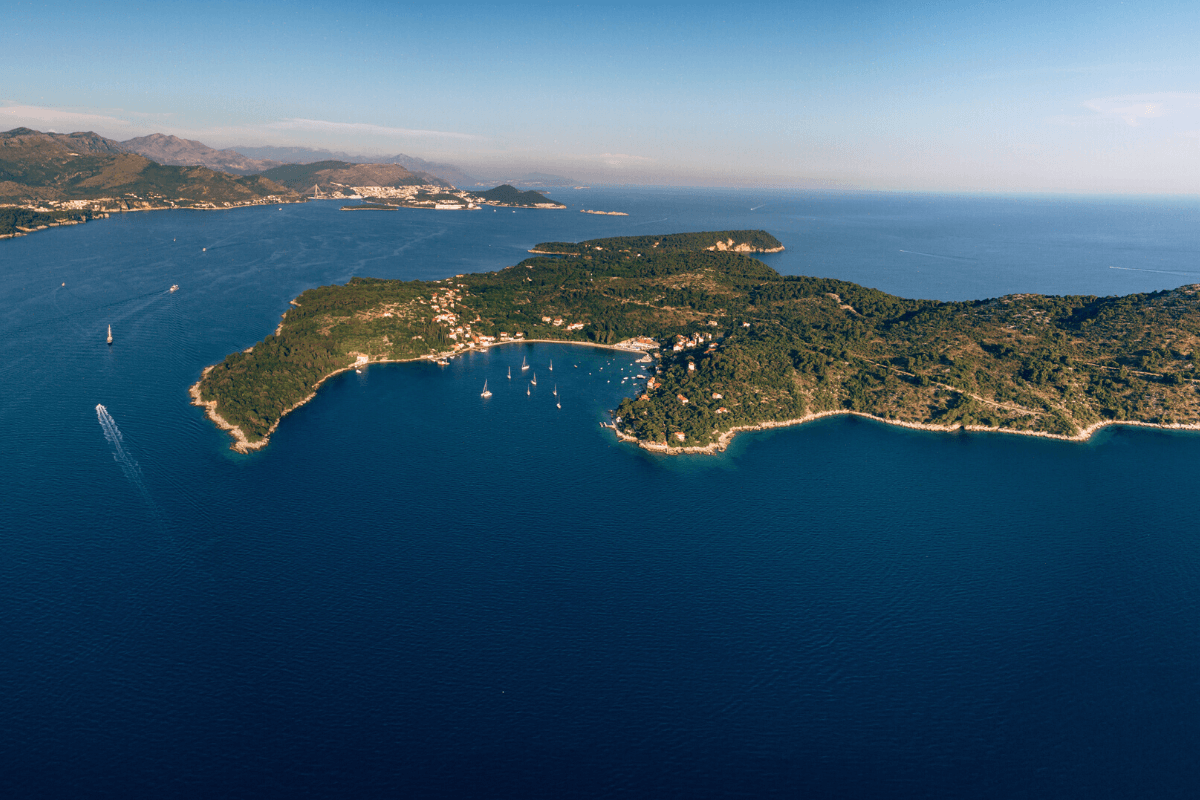 The largest island in the Elaphiti is also the furthest from Dubrovnik. As we already mentioned, there are two main settlements on the island, Šipanska Luka and Suđurađ, located in two opposite bays divided only by a field. You can travel between the two by car, or bus, as this is the only island in the archipelago that allows you to travel on 4-wheels. Populated by ​​about 400 people year-round, Šipan locals keep busy by tending to olive groves, carob trees, and, of course, vineyards, thanks to its hilly terrain. The island even made the Guinness Book of World Records for the most olive trees per capita on an island! Šipan was also once the summer home to many of Dubrovnik’s noble families, with the Sorkočević family the best known.

Between Koločep and Šipan is Lopud, known for its pearly white sandy beaches. Lopud is located on the northwest side of the island and has a view of Šipan. It is also one of the most inhabited islands in the Dubrovnik archipelago, with 220 residents! Churches, summer houses, fortresses, and monasteries rich in valuable works of art decorate the island, and with its breathtaking beaches, Lopud abounds in lush vegetation, beautiful gardens, and parks.

The green island of Koločep is the closest to Dubrovnik, known as the perfect one-day escape for locals. It is the southernmost inhabited Croatian island and is one of few that goes by two names, known by locals as ‘Kalamota’ (Calamotta). The settlements of Gornje and Donje Čelo are located in its two largest bays, which are connected by a 3-kilometer path wide enough for pedestrians, but no cars. Remains of ancient architecture have been preserved on the entire island, from churches and summer houses to lighthouses. Its subtropical vegetation, fresh sea air, pine forests, and olive trees contribute to its charm, while it flourishes in a dense pine forest that descends to the sea. 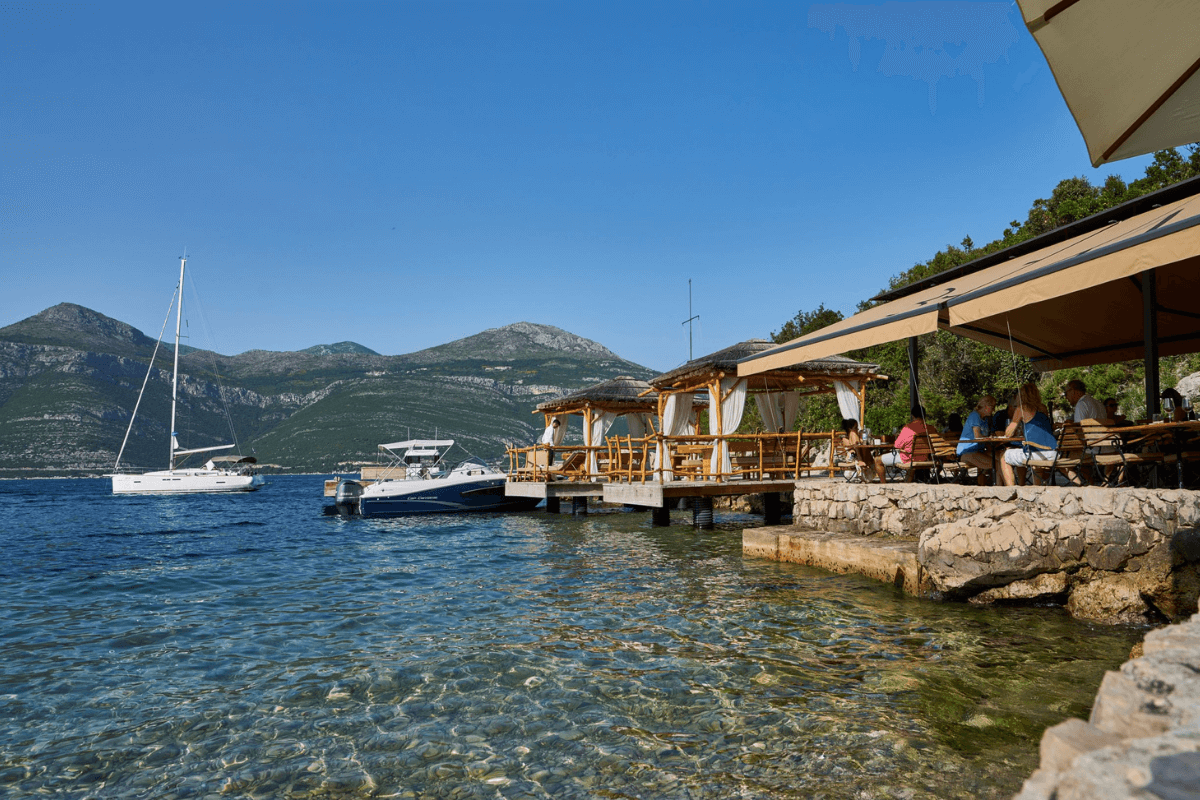 As expected, seafood rules the Elaphiti Islands, from shellfish to grilled fish and everything in between. This island archipelago even boasts some of the best eateries in the Dubrovnik area, like the swanky yet laid-back Bowa, for example, on Šipan Island. Sailing in by boat isn’t the only thing that adds to Bowa’s allure, as fresh fish, locally grown fruits and vegetables, and homemade island olive oil go into creating every dish. Kod Marka is another Šipan favorite, fit for a more casual and family-style outing, with seafood in focus.

The island of Lopud is known for Obala, a sea-facing terrace tavern founded in 1936, with traditional recipes and BBQ menu items should you opt to switch from seafood. Lopud’s  Robinzoon takes diners to the island’s core, or inland part, where meat dishes take precedence and a sea-view can’t be found. Robinzoon is the perfect place to try ‘peka’, while you can drink from bar stools made from donkey saddles!

Villa Rose is a seaside gem on Koločep with a setting so stunning, it’s a popular wedding locale, too. With multi-course menus and al fresco dining where dense forest meets the sea, Villa Rose gives Croatian classics a modern touch, ensuring something for everyone in your sailing holiday group. But if you’re looking for a no-frills, feel-good eating experience, locals love Konoba Skerac best. 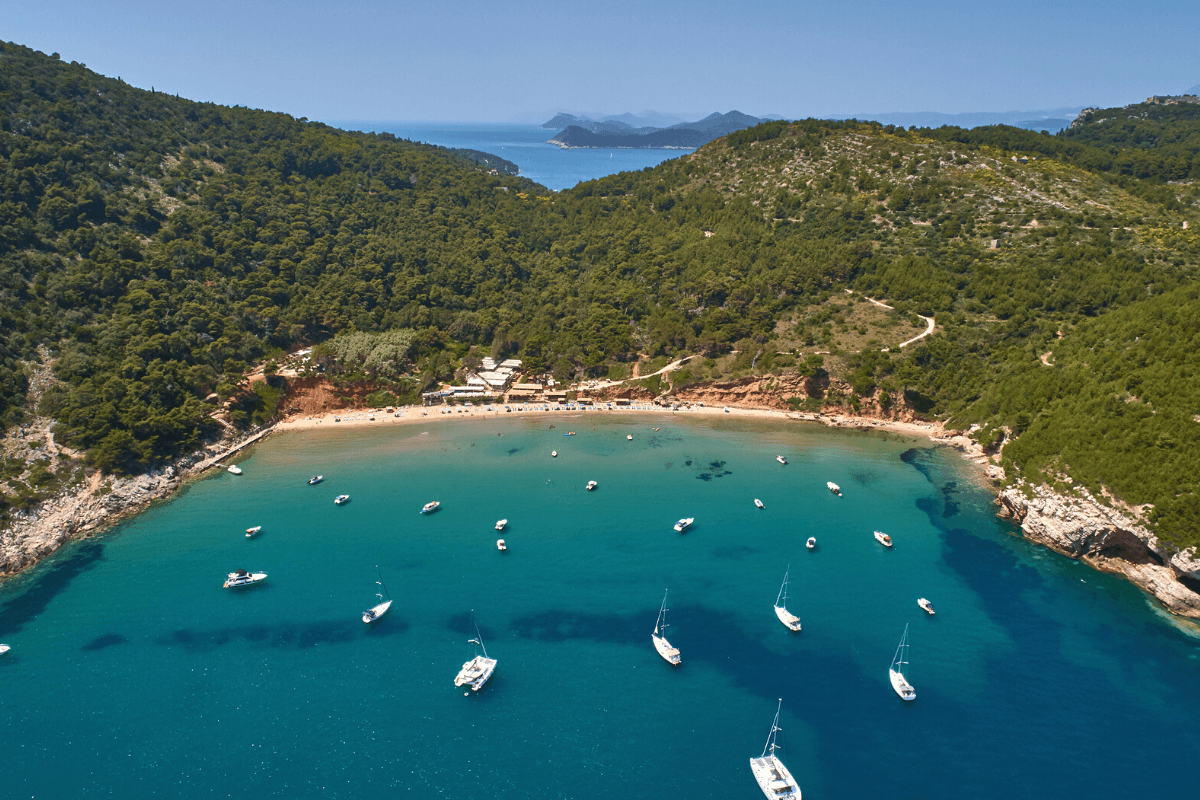 The Elaphiti Islands are known to boast some of the most beautiful beaches, but perhaps most popular is Šunj on the island of Lopud. This 800-meter-long sandy beach has all of the amenities and is easily accessible from the center of town by a manicured promenade. And with Lafodia Resort behind you, we really have everything you need at your fingertips!

But Lopud certainly isn’t the only island with sandy beachfronts. Koločep is known for two beaches, in particular. Don Đivan and Donje Čelo are traversed by locals and tourists alike, though you don’t want to miss the secluded Bige beach or the dramatic cliffs of Placet on the southern side of the island.

But the bays of Šipan are not to be missed, and should you prefer to wear your birthday suit for a swim, you’ll find many nudist beaches where you’ll fit right in! 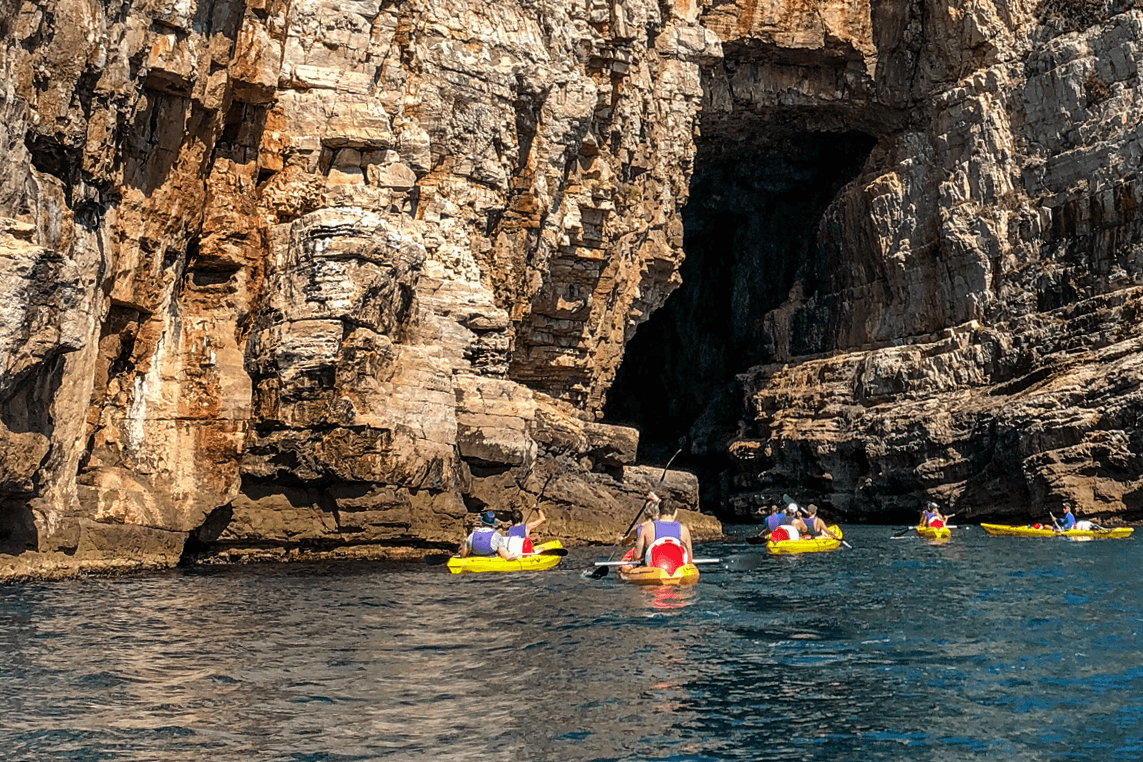 Looking for other activities on the Elaphiti Islands? Here are some things you won’t want to miss: