Cavtat - A pure bliss beneath the bustling Dubrovnik

When talking about Croatia’s southern coast, we are often limited to thinking about the Adriatic Pearl. But did you know the beauty of Dubrovnik extends even further and is found in a town just 20 kilometers south (and 5.5 nautical miles southeast)? Meet Cavtat, Croatia’s southernmost tourist resort and what many would consider pure bliss beneath the bustling Dubrovnik. Decorated by thick pine forest and scenic beaches, Cavtat is a hop, skip, and jump from Dubrovnik Airport (just 6 kilometers away), making it a foolproof destination to begin your sailing holiday.

The center of the Konvale Municipality was said to be founded as the Greek colony of Epidaurus in the 6th century, one whole century before Dubrovnik itself! Coming under Roman rule shortly after, Cavtat was destroyed during the 7th century by the Avars and Slavs and saw most of its residents flee to what would eventually become known as Dubrovnik. Cavtat came to life again in the 15th century and was the second-most important seaport during the Dubrovnik Republic, allowing the town to flourish thanks to trade and administration.

While it may not have the well-known walls of Dubrovnik, it boasts a vibrant history in an unparalleled coastal setting without the crowds. Abounding in Roman ruins, boutique hotels, quaint cafes, and fish-focused restaurants, Cavtat mixes Mediterranean charm with tourist trends, while embracing the hushed local life that thrives on Croatia’s coast today. 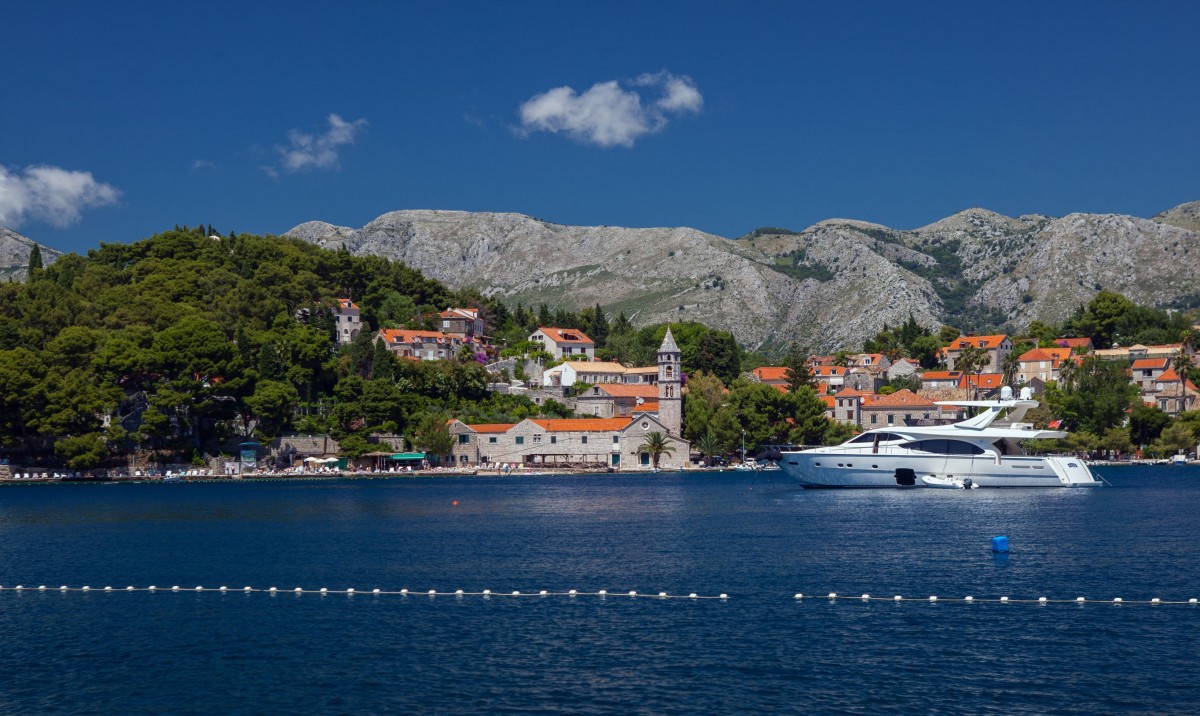 Cavtat’s southern location means it’s the last recognized harbor in Croatia before the Montenegrin border. Built on the Rat peninsula, Cavtat is set between two bays - Luka and Tiha. You can find berths for the boats on the well-protected Luka Bay harbor, which is located west of the old town and east of the Sustjepan peninsula, though it is often reserved for glamorous superyachts and booked throughout the peak summer months. Another and perhaps preferred option is dropping anchor in Tiha Bay, just north of the main Cavtat harbor and bordered by the larger hotels in the area.

Pro tip: While Luka Bay is generally well-protected during bura and jugo winds, it is not immune to maestral, making Tiha Bay the better option!

And you cannot miss the green jewels just in front of Cavtat - Supetar, Mrkan, and Bobara, the southernmost islands in Croatia. Known as the ‘Cavtat island’s, all three have been protected as natural reserves since 1975!

Now that you’re in Cavtat, what should you see?

Art lovers, for starters, can enjoy the works of Cavtat’s most famous former resident, Vlaho Bukovac, born in 1855. The well-traveled modernist painter saw his career span from Paris to Prague, and his works and frescoes are found in the House of Vlaho Bukovac, which acts as a gallery and museum today, but was also once Vlaho’s home!

The Račić Mausoleum, on the other hand, is dedicated to the famous Račić ship­building family. Built by distinguished Croatian sculptor Ivan Meštrović in 1921, the Račić Mausoleum was erected where the 15th century Chapel of St. Rocco once stood, on the highest point of the Rat peninsula. Built entirely of Brač Island stone, Račić Mausoleum keeps sculptures and reliefs, from the Virgin Mary and angels to portraits of Račić family members.

At the bottom of the hill, you can find the Our Lady of the Snow Church and Franciscan monastery founded in 1484. Housing many renaissance paintings, this attraction is known mainly for the Vlaho Bukovac canvas of Madonna and child.

Located in the center of the town is the baroque St. Nicholas Church, originally built in 1484. Here you can find more works by Vlaho Bukovac, the Baroque master Benedetto Genarri, and Sicilian painter Carmelo Reggi.

Last but not least, the Baltazar Bogišić Collection is dedicated to the Cavtat jurist and European-famous scientist, born in 1834. Founded between 1909-1912, the former Rector’s Palace boasts a library and archaeological collection with Roman inscriptions and amphorae and a large canvas of the Cavtat carnival by Bukovac himself.

What to eat & drink

The Cavtat waterfront promenade and the old town are bustling with lively restaurants, many of which pay homage to the local cuisine. While you can never go wrong with a traditional konoba-style restaurant (or tavern), diners can also choose the more modern La Boheme or Michelin Plate-approved Bugenvila. No matter which you choose, you should expect Dalmatian and Mediterranean-focused dishes, with many fresh seafood options, local ingredients, and plenty of olive oil.

And should you opt for a nightcap? Cavtat’s cafe bars will do the trick for a sip of rakija, while fancier hotel lounge bars are open to those who’d prefer craft cocktails. And wine enthusiasts need not worry, as Ankora Wine Bar is your go-to!

While on the mainland, the idyllic beaches of Cavtat are there to impress.

The popular city beach Ispod Gospe is a short walk from the center, conveniently located next to the marina. This concrete beach offers sunbed rentals, beautiful views, and a plethora of restaurant and bar options at your fingertips.

The concrete Sustjepan Beach is located on the peninsula of the same name, with easy access into the sea thanks to a staircase. Sun loungers and umbrellas are available to rent, with a restaurant and beach bar not far should you need to recharge.

Rat is another beach named after one of the peninsulas that form Cavtat. This pine-shaded paradise has a rocky and pebbled beach with a stunning sea-facing restaurant and unrivaled bay views.

The family-friendly Zal beach is located just north of the old town, with fine pebbles, a sandy sea bottom, and plenty of activities for kids!

The somewhat secluded Kameni Mali is not as known to tourists thanks to its discreet bay location on the tip of the Rat peninsula. However hidden, it is still easy to access by walking along the waterfront promenade.

And if you can find it, Kljucice is a peaceful gem on the Rat peninsula where serenity rules. While it's not so known to the footsteps of tourists, this pebble and pine oasis does have a limited offer of sunbeds and umbrellas - but being this wrapped by the natural world; you may need nothing else. 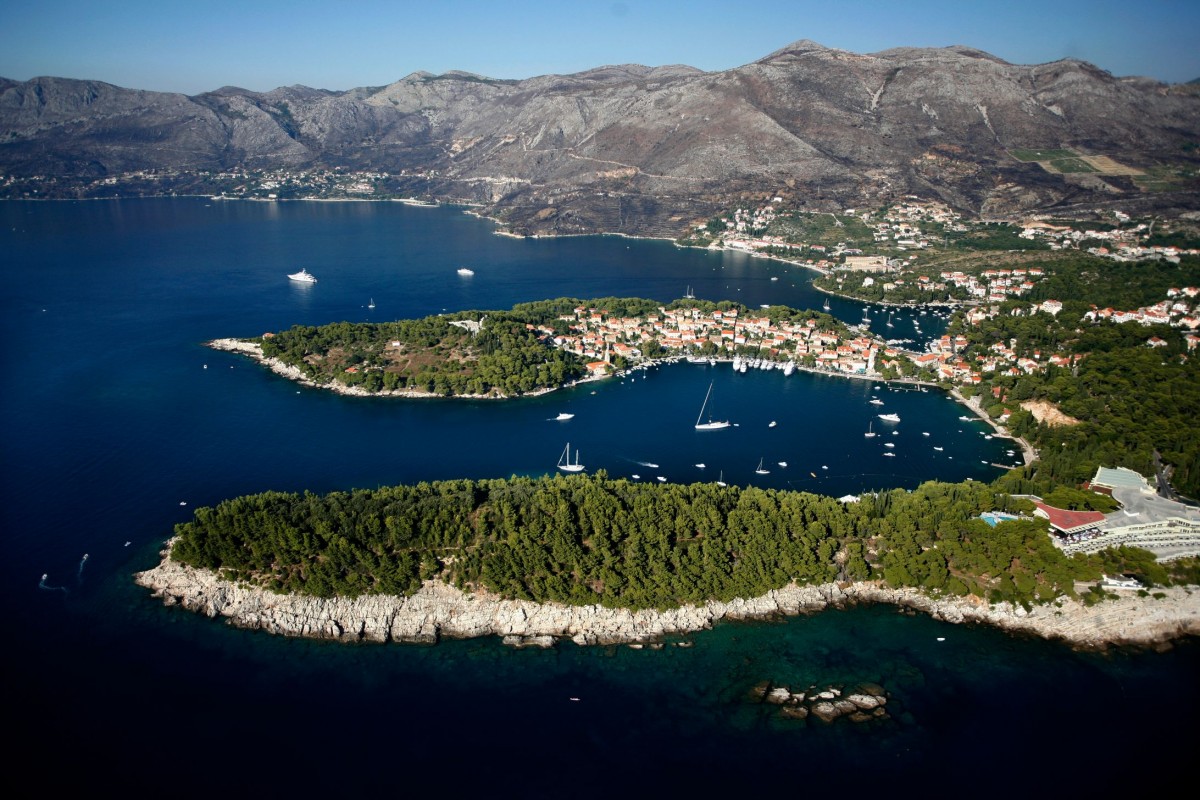 Water activities surely rule the area, with snorkeling, kayaking, and diving at the core of Cavtat’s activities. One of the most unique activities for divers is one of Croatia’s largest undersea amphorae sites, with more than 600 amphorae, easily reachable by boat from Cavtat’s center!

And if you wish to explore the land? The Konvale area itself offers many cycling routes through the nearby towns, with ancient churches, fields, villages, and Adriatic sea views at every turn.

Those of you wishing to stay active on holiday with tennis have the courts at hotel Iberostar Albatros, and even horseback riding can be enjoyed just 10 kilometers away in the village of Popovici.

But if you just want to get those sea legs moving, there is nothing better than a stroll through the picturesque Cavtat old town and along the extended waterfront promenade. We might just believe that’s the best way to embrace this beauty beyond the Dubrovnik walls.

Must-Try Foods on the Croatian Coast